No WSJ puzzle today due to the holiday. Please celebrate responsibly, i.e. by treating all of your fellow humans with dignity and respect which you really should be doing every other day, too. Enjoy the day!

This is Sean Biggins’s debut in the NYT, and it’s a special for Martin Luther King, Jr Day. I liked it a lot and look forward to seeing more from Sean. 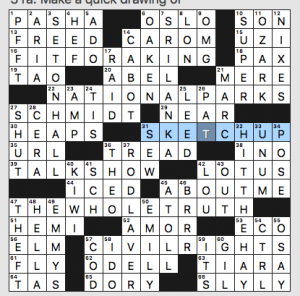 Each theme answer ends in a word that is also a name.

What do they have in common? 57a [Cause championed by the figures named at the ends 0f 16-, 22-, and 47-Across] is CIVIL RIGHTS. That would be Martin Luther KING, Jr, Rosa PARKS, and Sojourner TRUTH.

While it sometimes seems we are moving backwards in the fight against racism, talking to my daughter and her friends is reassuring. Here’s to the next generation – we are leaving them too much to do, and they are up to the task.

What I didn’t know before I did this puzzle: that ROD LAVER won eleven Grand Slam titles. He was in his heyday when I first started watching pro tennis. I knew he was great, but couldn’t have given you the number. 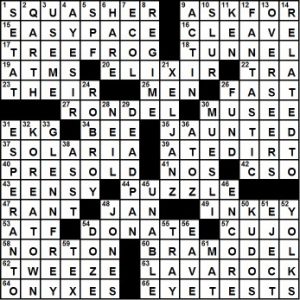 Each of the past two weeks I have been rushed doing this puzzle and the write-up. Not today, though, as I’m off from work.

I JAUNTED to a nearby coffee shop. Rather than drive, or jog at an EASY PACE, I drove, which, notwithstanding BEQ’s clue, [Went on a short walk], is an okay way to jaunt. Did I ASK FOR my usual latte with an extra shot? Yup, I did.

Then I sat back in a comfortable seat, hoping for a FANTASTIC experience, though not in the sense of it being [Made-up]. I was UNABLE to zip through it, as there were several interruptions from friends coming up to say hi.

I tried to remain DEADPAN after reading the clue for 21d, [Arthritis medicine that would score high in Scrabble]. Though I was not optimistic, this answer, XELJANZ,  came together nicely from the crossers–and I needed each and every letter! So, I guess you could say I ATE DIRT as I pieced it together.

I have a nit to pick, and it’s RELATED TO the clue for 14d, [Part of the family]. No matter how I try, I cannot come up with a usage in which the clue and answer substitute. Again, I am reminded of the rule against long partials and how it leads to non-FITB clues that are just a tad off-kilter. A similar nit applies to 9d [Role play?] ACT IN. Someone please correct me if I err.

LAVA ROCK and BRA MODEL both look, sound, and feel like green paint to me, but who really cares? The latter was a non-theme entry in a Sunday Los Angeles Times puzzle by Dan Schoenholz in 2010, and it gets 261,000 Google hits. The former was a non-themer in a Tuesday LAT by Jacob Stulberg in 2016; it gets 4,000,000 Google hits. They’re lively, they’re accessible; why let the fact that they are not in the dictionary keep them out? However, I cannot but wonder how women feel about the latter as a crossword entry. Any takers for a discussion of that issue?

My favorite clue-answer combos were:

1a [Ant killer] SQUASHER–I struggled with this one, wanting it to be some kind of spray, but as it materialized from the crossers, I immediately liked it a lot (please don’t tell ASPCA or PETA).
17a [Little arboreal croaker] TREE FROG–Somehow, I knew this one immediately, and that’s always a feel-good moment.
64a [Stones whose name means “fingernails”] ONYXES–Who knew? Not me. And now I’m glad I know.
65a [Times when people look their best] EYE TESTS. Lest you object, time can mean “occasion.”
2d [Port city with three walls in “Game of Thrones”] QARTH–This is as new to me as it to Ginsberg’s database.
32d [L.A. neighborhood west of MacArthur Park] KOREATOWN–I’m not that familiar with L.A. geography, but having played golf in Brentwood once, I tentatively inserted that until TWEEZE and ONYXES mandated revision.
33d [“Heartache Tonight” singer] GLENN FREY–Always good to see an old Eagle in a puzzle, and I’d forgotten over the years that he was the one singing this song.

All in all, a very enjoyable experience. With 72 answers, 29 blocks, 12 3-letter words, and 12 entries of 8-or-more letters, it was nicely balanced.  I counted 18 ILSAs and 3 ILSA-lookalikes. It was satisfyingly crunchy, like a breakfast of MUESLI. 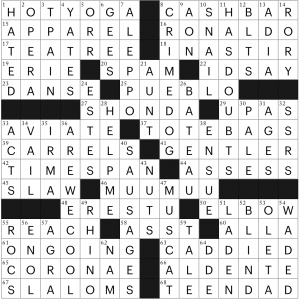 Posting this a bit late in the day; just got back this afternoon from the MIT Mystery Hunt, where one-fifth of Team Fiend was on Team Palindrome; we didn’t win but it was loads of fun and I helped solve puzzles about which I previously had no idea that anyone could make a puzzle. Coming back to regular-ol’ themeless crossword puzzle is quite refreshing! (Not that anyone would call one of Liz Gorski’s puzzles “regular-ol’.”) Here are five notable things about this themeless: 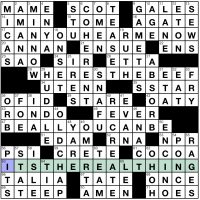 So, this theme is just … slogans? With no word play or anything connecting them other than that they’re all slogans? Also, the most recent of these slogans is the Verizon one, which stopped being used in 2011. The Wendy’s slogan is from the 80s (though partly revived in 2011), the U.S. Army slogan ran from the 80s until 2001, and the Coca-Cola one I’d never heard before in this form is from 1969. This seems like a puzzle out of a totally different era of crossword construction not only because the slogans feel dated, but also because it’s no longer the case that a list of four things somewhat connected suffices as a theme anymore. The one good thing I can say about this puzzle’s theme is that the theme entries went in so quickly that I hit a near record time for a Monday LAT puzzle! Little victories. : )

A few more things:
– Side eye to these bits of suspicious Monday fill: SSTAR, RONDO, YARE
– We have a nice balance of women and men in the grid, which I’ll take any day. The women include Auntie MAME, TALIA Shire, ETTA James, and ENYA. FWIW, RUTH could have easily been clued as [___ Bader Ginsberg] instead of as [Baseball’s Babe].
– “Dear EVAN Hansen” and “Rocky” were reference in the puzzle, and that helped things not feel as dated.