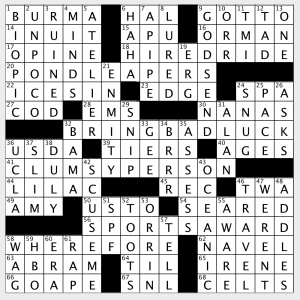 Hi folks! Regular fiendster Laura is on some type of mystery hunt; may she, in the words of this week’s puzzle’s constructor, not be led astray by words intended to deceive!

So, hoping the same shall go for us this week, we’re in search of a three-letter initialism. Even before I dove into the puzzle itself, my mind was leaning toward Q.E.D. (Quod Erat Demonstrandum), or what typically appears at the end of a proof (as alluded to in the title). But dive in I did and saw 6 (!) theme entries, which only had a number in parentheses as their clues, adding quite a bit of difficulty to the puzzle:

My first assumption was that these were clues to other words and that the length of these words were indicated by the number in parentheses in the clue (good guess!). The first one, if indeed three letters, could really only be CAB, but I struggled with certainty on the others. Do TOADS leap? Can you DAMN someone with bad luck? And if I was wrong about the word lengths, words like OAF, ESPY and THEN/THUS would work for the other clues. For an additional level of confirmation, I wondered if perhaps these words were either hidden in these clues or perhaps anagrams of other words in the grid. Nope.

It wasn’t until I came up with both JINX and KLUTZ did I begin to notice how no letter was repeated in these thematic words. If I included FROGS, I was left with HDEMPQVWY. From there, I raced to seeing my tentative answer (QED), MVP for the sports award and WHY for wherefore. So QED ’twas.

This feels a bit familiar as a Matt meta device, but, unlike my co-blogger joon, I have a much more tentative memory about these kind of things. In any case, I enjoyed it, although these words could in some sense be considered “unchecked letters” unless one knows what the meta device is beforehand or is at least sure about the purpose of the enumerations to limit the possible words. A couple of real clues of note: