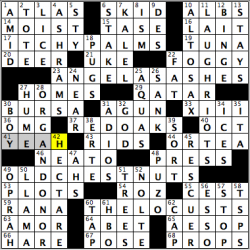 Crossword Nation puzzle solution, Week 399: “Made in the Shade”

Hello hello everybody! I think I’m a little extra ebullient to start knowing that I’m indoors writing this review and getting a reprieve from the absolutely frigid temperatures that have gripped the East Coast, let alone other parts of the country and globe. Though one cannot gain any shelter from the cold using TREES, they do happen to be the crux of today’s theme, with five across entries being two-word answers in which the second word is the pluralized version of a type of tree (51D: [1913 Kilmer poem (and a hint to the puzzle theme)]).

There has been a recent run in crossword puzzles of the entry ASHRAMS, so that helped to turn what could have been somewhat of a tricky clue into a layup once a couple of letters were inputted (4D: [Religious retreats]). Some of the fun fill in the grid includes ORGAN DONOR (28D: [Life-saving person]) and ALTO SAX, with the latter’s clue immediately making me think about one of my all-time favorite tunes, the Cannonball Adderley Quintet’s Walk Tall, a song that, when appearing on its record album, is actually introduced by the words from a speech made by Reverend Jesse Jackson in which his outlying message shares the words of the title of the song (10D: [Cannonball Adderley’s instrument]). Walk tall! Walk tall!! WALK TALL!

A few of you might have been tripped up whether PUGS and its clue referred to dogs or the sport of boxing (18D: [Boxers]). It’s definitely boxing, though I guess there’s the remote possibility that a person not well-versed in canines could mix up a boxer with a pug! Also, a little embarrassed that I did not know HECTARE off the top of my head and needed its crossings to parse it out (42D: [About 2.5 acres]). I need to brush up on my metric unit terminology ASAP!

“Sports will make you smarter” moment of the day: XIII (33A: [13, in old Rome]) –  The last 10 or so Super Bowls have produced so many epic contests and amazing finishes that a recency bias could easily be developed when talking about the greatest Super Bowl played, and many older fans point to Super Bowl XIII as perhaps the best one. Two historic franchises, the Dallas Cowboys and Pittsburgh Steelers, met in the first rematch of a previous Super Bowl (SB X) and it was the Steelers that pulled out a 35-31 win in a high-scoring affair in Miami. Of all the touchdowns scored in the game, the most memorable moment of the game was a touchdown that should have been — but wasn’t — and the legendary radio call that spawned from the play. Late in the third quarter and facing a third down just 10 yards away from the end zone, Dallas quarterback Roger Staubach threw a pass to a wide-open Jackie Smith, but the Hall-of-Fame tight end dropped the pass. A touchdown would have tied the game at 21, but the Cowboys had to settle for a field goal to slice their deficit to four. Eventually, the Cowboys lost the game by four. The play is memorialized by the radio call of the great sports broadcaster Verne Lundquist, working for the Cowboys at the time: “Bless his heart, he’s got to be the sickest man in America!”

Addendum: I was going to embed the video of Smith’s drop/Lundquist’s radio call, but the NFL has blocked the videos, which are on YouTube, to be embedded on other website. BOO THE NFL!! (Something I have said a number of times in the past few years.) So here’s the link to the pivotal play of Super Bowl XIII.

Thank you so much for the time once more! Stay warm, you all! Have a wonderful day, everyone, and, as always, keep solving!!

We’ve seen countless news articles about what we should allegedly blame on the Millennials; now, how about “Generation Z”? 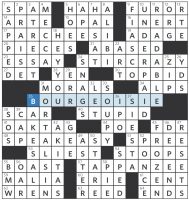 17A: PARCHEESI [Board game in which each player controls four tokens]
24A: STIR CRAZY [Suffering from cabin fever]
35A: BOURGEOISIE [Middle class]
48A: SPEAK EASY [Prohibition saloon]
57A: TAPPANZEE [Hudson River expanse spanned by the Governor Mario M. Cuomo Bridge]

Each of the theme entries ends with a “zee” sound. Ok. I do appreciate that there is so much theme fill and that each theme entry ends in a different set of letters to give the same “zee” sound, but I guess I expected none of them to actually use the letter Z after we were given the title of “Generation Z”? That’s silly, I acknowledge. I do also appreciate that each themer is three syllables (though, interestingly, the title isn’t). Otherwise, these themers were all clearly in the language, except I’m a West Coast kid who has never heard of the TAPPANZEE Bridge. Thankfully, the downs in that section were easy to get.

MALIA Obama (clued via her sister, Sasha) is the only woman in the entire grid, though there weren’t that many men (or proper nouns at all) in there either. This grid was quite clean, aside from maybe ARTE (which is somehow in the same grid as the separate entry, ART) and OAKTAG, which I side-eyed a bit for its randomness. This puzzle was a quick and easy SPREE, indeed. 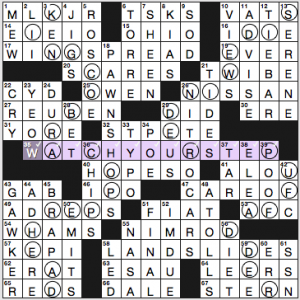 Seeing MLK JR at 1-Across and KING starting the string of circled squares at its K, I assumed there was a King quote spelled out by the circled squares, with the timing a week off from his 1/15 birthday. But no, it’s a WATCH YOUR STEP theme and four snakes winding through the grid: KING COBRA, SIDEWINDER, COPPERHEAD, and PUFF ADDER. I feel like “watch your step” is inadequate for the KING COBRA, because you could conceivably run into trouble with one of those without stepping on it. And the same is likely true for the others, so the central revealer doesn’t really work for me.

The snakes’ layout allows for some flexibility, so the fill isn’t as dire as it often is with so many triple-checked squares. There are a number of entries I’m surprised to see in a Tuesday puzzle, though: TWIBE ([Certain close-knit social media group], presumably a Twitter thing, but I’m on Twitter and this doesn’t ring a bell), MEW, CYD, KEPI, ELEA, the AFC/UFC crossing, and the vaguely contrived I’M DUE. NITRO CARS is also pretty hard ([Hobbyists’ racers controlled remotely])—I needed to work the crossings for that. 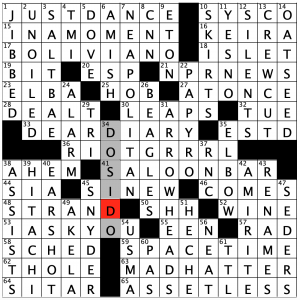 A themeless this week for the Jonesin’. A slightly tough one, but not too bad. I count 70 words in this open grid, but there is no entry longer than 10 letters, so there is tons of great fill. There is an entry or two here that might not be common knowledge, but that is OK. We can learn something! Perhaps even I can teach you something in the comments as well! A solid 4.7 stars for a great themeless puzzle.

I could go on, because there is a lot to like in this grid. But there will be another Jonesin’ next week! 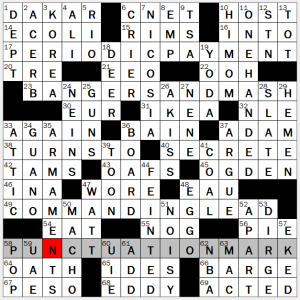 Can you believe the ACPT is almost here? Only another few weeks and we will be in Stamford again. I am trying to get my sister to accompany this time; I have only been trying for 20 years to get her to attend!

We have a mini English lesson in today’s LAT grid. Here are the themers:

Soooo, 58-Across clues these punctuation marks as “what ends many a line.” How does a comma end a line? Unless we are talking computer code, in which case I think this could be correct. A “bang” is slang for an exclamation point, and I had to look that up, because I don’t think I knew this. I have never heard anyone call it this in Indiana! This seems kind of hard for a Tuesday, at least from a straightforward theme angle. Or maybe it is just me. I think the theme is fine; I just don’t care for the clue at 58A. 4.1 stars today.