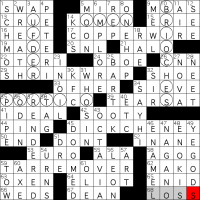 hello and welcome to episode #555 of matt gaffney’s weekly crossword contest, “Job Search”. for this tricky week 3 puzzle, matt challenged us to find a famous movie from the 1970s. what were the theme answers?

okay, so the first step is fairly clear: each of these begins with a word that is a nickname for a job. a COPPER is a police officer, a SHRINK is a psychiatrist, a DICK is a private detective, and a TAR is a sailor. but what next? and what about the number in the parentheses?

there are a lot of avenues that suggest themselves, not least because the grid is a little unwieldy if these are really the only four theme answers, with some seemingly unnecessary cheater squares and some pretty out-there fill. but the most out-there of the fill is {Melissa ___ Maur (former member of Hole and Smashing Pumpkins)} AUF DER, which is a 6-letter partial based on the name of a bassist i have never heard of. so i thought that was likely to have something to do with the meta.

after being away from the puzzle for most of the weekend due to mystery hunt, i came back to this monday night and saw that AUF DER can be anagrammed to FREUD + A, freud being a notable SHRINK. so the parenthetical 6 is there to suggest the length of answer we’re looking for. after that, the others weren’t that difficult to find:

so that gives us HACK, which is yet another job nickname. and for the second week in a row (!), the meta hinges on it being a synonym of the 1976 film TAXI DRIVER. i don’t know exactly what to think of that—it’s both absurd and audacious. certainly for a puzzle centered on job titles whose answer is known to be a 1970s movie, that would be one of the first things to come to mind—if it hadn’t featured so prominently last week. was matt trying to use reverse psychology on us? if you didn’t find the anagrams, would you be more or less likely to guess the right answer because it was fresh in your mind from week 2?

strange timing aside, this was a cool meta. the first step is as obvious as it can be, but the anagrams are quite well disguised; without the lengths in parentheses, i feel like it would have been insanely hard to find them. AUF DER pretty much had to be one of them because it’s so weird, but i think even with the mechanism known, it would have been so time-consuming to search every other entry for the other three anagrams, so i am very glad matt chose to give us the lengths.

after a whirlwind weekend of solving puzzles and metas at mystery hunt, i’m going to stop here. how’d you like this one?