The last time Ben Kramer was here he gave us an impressive grid with an “OK BY ME” theme. This one does not disappoint either.

SPLIT SECOND is the revealer at 36a and it’s clued [Instant, or what you’ll find in each set of circled letters]. My grid didn’t have the circled letters, so I shaded them yellow for the picture. But each pair of entries combines to name a well-known second banana (i.e. sidekick). 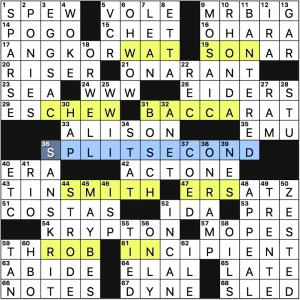 This was a lot of fun for me even though I mostly ignored the theme during the solve. Once completed, I was awed by that CHEWBACCA find. And the title! Spot. On. (Although I’m pretty sure Chewie is in no way Han’s junior.)

And there’s a lot of good stuff in the grid besides: SANSKRIT, BANTERED, KRYPTON, MAYBES, MOSAIC, RHONDA, ORWELL, MR BIG.

I couldn’t recall Hieronymus BOSCH [“The Garden of Earthly Delights” painter], but got it with the crossings. I did know ALISON [1977 Elvis Costello song], so that helped. Yes, it’s a proper name crossing, but O seems to be the only letter that makes sense there.

The cluing was fun too. Check out some of these: 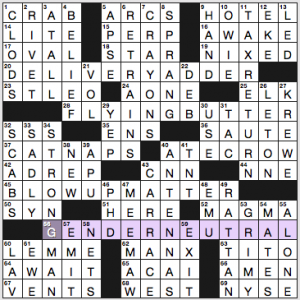 The theme revealer is 56a. [Like 20-, 28- and 45-Across vis-à-vis the female-sounding phrases they’re based on?], GENDER NEUTRAL. Those other three answers are:

There’s the issue of whether the first word in each of these pairs—actor/actress, waiter/waitress, comedian/comedienne—is truly gender neutral, or whether it’s still steeped in its “male is the default” maleness. Given that there are still people out there insisting that he is perfectly fine as a gender-neutral pronoun to use when you don’t know the gender of the person you’re referring to (as in “everyone should clean up after himself”), this theme feels a bit off base to me. 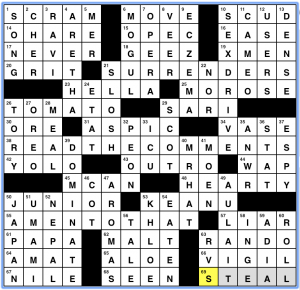 Ben Tausig has today’s AVCX puzzle, and it’s a high-concept theme that I think mostly works, but is a little trickier than the 2/5 difficulty suggests it would be:

I see you, RANDO commenters.  More importantly, I see your IP addresses and I especially see when they line up with someone whose account I know.  That’s not important for this puzzle, but parsing RANDO as R AND O is important for parsing this puzzle’s theme clues.  The words that begin with R and O in each fake comment about the AVCX (which I’ve bolded above) spells out the actual clues for their entries.

I found the idea of hiding the true clues for entries an interesting idea that I’d see out in a Mystery Hunt puzzle.  I’m not entirely sure it works here, but I think this is an interesting attempt at trying something different with theme, and I applaud that wholeheartedly.

I leave the puzzle here this week, but with a note that most San Marzano TOMATOes are a scam . Just buy Muir Glens! 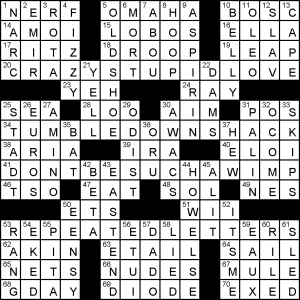 The puzzle’s theme explains itself. There are 3 15s with no REPEATEDLETTERS. Two thirds of them lean towards the green paint end of the spectrum, with only CRAZYSTUPIDLOVE seeming ironclad.

Four fifteens nearly always result in a very stuffy feeling puzzle, and this was no different. STADT, AWACS and DADO are words to note for next year, being infrequent, difficult crossword answers.