fireball is a contest this week, so no review until after the sunday deadline. 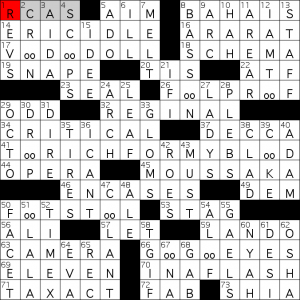 it’s a rebus thursday, with five across answers each containing two OO squares:

this wasn’t quite as easy a rebus puzzle as the last time i filled in for andy on a thursday, but it still came together quite quickly with CROON strongly suggesting itself at 2d and then VOO… at 17a giving the game away. nevertheless, i struggled in places. {Believers in oneness} i wanted to be something like HOLISTS or MONISTS (thinking there might be more rebus action here), but no, it was BAHAIS. {Fit for a queen} REGINAL is an unusual word—so much so that it’s not in my dictionary, and spellcheck is flagging it. it certainly makes sense if you know the latin word regina, but it’s still surprising to see unfamiliar english words in the grid. finally, {___ beetle} STAG had me flummoxed for a while, as i badly wanted it to be STINK.

Ts are changed to Fs at the beginnings of phrases. 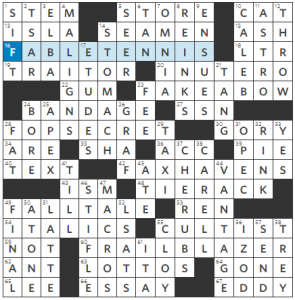 Pretty sure I’ve seen this theme before, but with a “False Start” revealer. This one’s title works just as well, though.

However, the theme feels too loose to me. There are a great many words that start with T that are still words after changing the T to an F (tunnel, tree, tear, tact, tired, tool, trench, etc.). I’d like to see some other constraint applied here. Or at least find entries that are LOL funny.

Though nothing here particularly tickled my funny bone, it all works well enough. I did raise my eyebrows at the equating of FOP and metrosexual. The former seems too quaint to be used to describe the latter, even though “metrosexual” itself feels pretty dated.

The fill is solid though not too sparkly, no doubt due to having six themers. I did like STOMACH with IN UTERO nearby. And those cute little CHERUBS, too.

A fine puzzle, but nothing very new here. 3.4 stars. 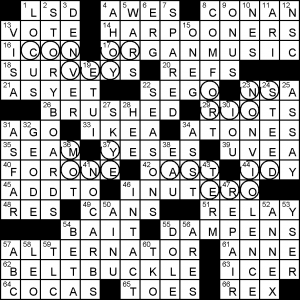 The puzzle’s theme is way more ambitious than most you see for the LA Times. There are four BELTBUCKLEs – “types” of belt spelt out in circles: CONVEYOR, ORIONS, MONEY and ASTEROID.

Those largeish wads of circled squares can make construction a bear, and there are definitely a good few answers that are of the “use only in extreme desperation” kind. At least here, we have some payoff in an unusual theme. 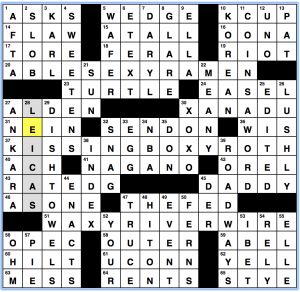 This Thursday’s BEQ puzzle plays on a recent Facebook meme:

This theme was pretty quick to grok.  ABLE SEAMEN, KISSING BOOTH, and WAIVER WIRE all get a ten year (XYR) glow-up

RIP DARYL Dragon of Captain & Tenille, this is a weird song and a weird performance

I love to see XANADU in a grid, as well as COINS A WORD, ANKARA, and DISH TOWELS