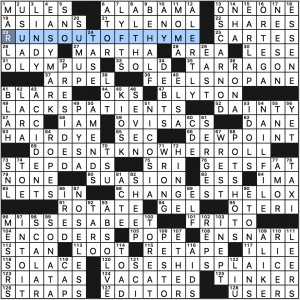 I like a good pun and these are mostly good. Sure, they’re not new, but they work, and the theme is consistent throughout. I had the most trouble with that central entry; some of those crosses were tough to suss out (TSU, SERGES). It was also tough to parse because it looks like the word “nowhere” wants to be in there.

What really got me though were some of the very unusual words in the grid not helped by their own tough crossings: SUASION (80a, [Coaxing]) crossing the same TSU from above, ARPEL (37a , [Adrien of skin care fame]) crossing the ambiguously clued LOT [Studio section], and LESE (30a, [___-majeste (treason)]) crossing EARLAP [Winter hat feature] which I wanted to be EAR FLAP. SEC clued as an acronym crossing [Capital of Cyprus] NICOSIA might also have caused some people grief.

But there are plenty of goodies to admire as well: OLYMPUS, TARRAGON, BLYTON, HAIR DYE, DEW POINT, STEPDADS, TINKER, EASY MARK, OSCAR NOD, ACCIDENT, POT SHOTS, NAIL FILE, and NOSELESS [Like Voldemort, in the Harry Potter films]. Plenty of fun to be had in those. Enough that I can look past stinkers like PAYS A and IRED. 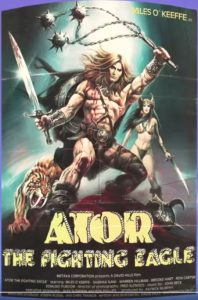 Oh, and I never thought I’d see 6d ATOR in a grid. That cheesy film, subtitled The Fighting Eagle, was included in last year’s series of Mystery Science Theater 3000. To quote them, “How much Keeffe is in this movie?” “Miles O’Keeffe.” Sadly though, the entry doesn’t get a Fighting Eagle clue but [Fabric finish?].

One clue of note: 12d [How good drivers drive]. ALERTLY. When I was a kid, my older brother got his first car. He got this on his license plate frame which I always admired: “Drive Nimbly, Not Numbly.”

Some sticking points in the grid, but overall, a fine, punny puzzle. 3.6 stars. 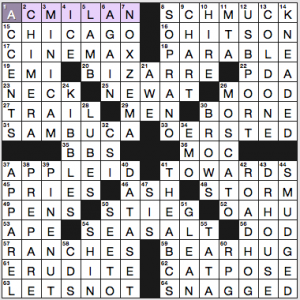 No solving time to report, as I turned off the timer and worked the puzzle while watching the Fyre documentary  on Netflix. I thought I had no interest in the doc, but this is highly entertaining! (If you like schadenfreude, check it out.)

Given my divided attention, I didn’t notice while solving that this is a grid design I generally dislike, as these chunky 7s tend to be laden with dull, lifeless words. But hey! David actually pulled this off, lots of zippy stuff. Italian soccer club AC MILAN. Yiddish SCHMUCK. “OH, IT’S ON.” SAMBUCA, APPLE ID, SEA SALT, BEAR HUG, yoga CAT POSE,”LET’S NOT,” a mythical CHIMERA, tasty PINE NUT, Scrabbly NOXZEMA cream, THE ABCS, sweet MOSCATO or a COLD ONE. 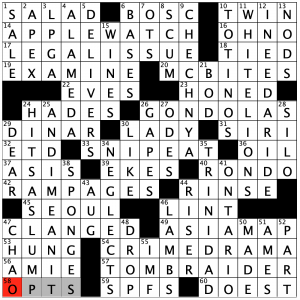 Another C.C. puzzle this Saturday. And another joyous solve. I believe this has a word count of 70, and I solved this in just over 7 minutes without too much rushing, but I still think these Saturday LAT puzzles are just a tad tougher than they used to be. I am hoping C.C. is at the ACPT this year so I can meet her finally! She is a solid constructor, and this one is another gem: 4.5 stars.

I could go on, because there is a lot to like! 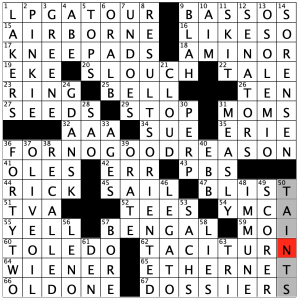 Today’s Lester Ruff puzzle was definitely “less rough” than normal. We have a break on Groundhog Day! I wonder if Stan will continue to use the pseudonyms he has, in light of recent changes of thinking in this area? I know one purpose is to give the illusion that the same person is not writing all of the puzzles, but perhaps if it is known that the same person is producing puzzles, submissions will start rolling in. I could be wrong. Also, What about the hybrid pseudonyms used by constructor pairs? Will those continue? So many questions. In the meantime, Stan has made a great puzzle here. And I am thankful it wasn’t so hard. 4.3 stars.

Have a wonderful weekend! We should be all thawed out by the end of it!