Meta time! And an apropos meta at that. This week’s WaPo asks the solver “Which NFL team is hinted at by this puzzle’s theme?” Let’s see what we have going on here… 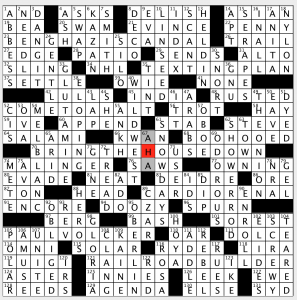 So what gives? I know next to nothing about football, but I’m relatively sure the BENGHAZI SCANDAL is unrelated. However, once you see BENGAL hidden in those words, it’s hard to unsee. A quick look at the title NFL Divisions and the rest of the theme answers provided the first 67-Down moment (the apt clue for which is [Meta solver’s cry]). A player for 7 different NFL teams can be found “divided” in each of the across themers.

COME TO A HALT = COLT

BRING THE HOUSE DOWN = BROWN

Cool! In fact, if Evan had just circled those letters and left the puzzle at that, it would’ve been just fine, given the title. But he took it a big step further. What team is hinted at? This part is tougher to figure out, but brings yet another satisfying 67-Down.

Cincinnati is home to the Bengals. Then there’s the Houston Texans, Indiana Colts, Cleveland Browns, Arizona Cardinals, Green Bay Packers, and finally the Oakland Raiders. The first letters of each of the locales spells CHICAGO, which of course is home to our meta answer: DA BEARS. 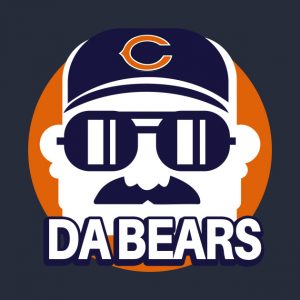 I really liked this meta! I figured it out whilst tending bar. After writing the full team names down on a cocktail napkin, I saw CHICAGO quickly, and triumphantly cried “Bears!” to no one in particular. When patrons asked what was wrong with me, and I explained the puzzle, they were blown away. I love showing people how creative crossword puzzles can be.

CARDIORENAL was new to me as a term, and I’d never heard of PAUL VOLCKER, but the former was easy to infer based on the clue and the latter was fairly crossed as to avoid Naticks. RAILROAD BUILDER seems quite vague as a term, but in order for the meta to work, it was necessary to end with the Oakland Raiders, and the only other answer I could find to fit using a OneLook search was RABID WOLF SPIDER. Haha! I’ll take RAILROAD BUILDER.

Smooth fill all around with some really great clues like:

Happy Super Bowl Sunday, everyone! May the ads be worthwhile and your boxes hit for all for all four quarters. 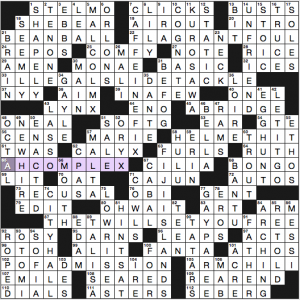 It took me a while to figure out what all was going on with this theme. The title is a play on “rejection letters,” but with a riff on fouls that get an athlete ejected from the game. The first four theme entries are various fouls, from four different sports:

Then you have four athletes, one from each sport, clued via cross-reference to a theme answer in the bottom of the grid. Hang on while I find RUTH, because I filled him in through the crossings.

There were a couple tough crossings of not-super-familiar proper nouns and the parts of themers where letters had been ejected. 93d. [People of south-central Mexico], OTOMI, meet the spot where RICE was gone. Don’t complain that Natan put OTOMI in his puzzle—be mad that the Mexican government generally focused on the Aztecs and Mayans to the exclusion of other indigenous cultures that hadn’t gone away. Then there was 89d. [___ Stark, Oona Chaplin’s “Game of Thrones” role], TALISA, with the T in the RUTH-less spot. That character was on seasons 2-3, and the 9th and final season starts this spring. Even if you dig pop culture, I hereby excuse you from needing to know this TALISA.

Among the sparkle in the fill, we have: Janelle MONAE, pretty botanical word CALYX, CAJUN (71a. [English dialect in which “food shopping” is “makin’ groceries”], huh, did not know that), CAFFEINE FIX, Akira KUROSAWA, UNFRIEND, NEW HIRE, CITY HALL, and LOW-RISES.

Didn’t we recently have a daily puzzle with a similar theme? I’m too tired to look it up but I am pretty sure we did. Five nights, three hotels, two days of meetings, one presentation, two days with my kid, and one harrowing drive from San Diego to Long Beach in driving rain and gale-force winds with the tire inflation alert going off in the middle….it’s been a great trip overall and I’m ready to go home tomorrow.

Meanwhile, there’s this puzzle. I liked the theme – it was fun and well-executed – but the overall quality of the fill took it down several notches.

It was obvious from the beginning that something funky was going on with the theme answers. 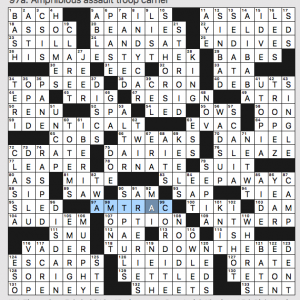 But the fill. Oy. Plural CSIS, plural APRILS, plural ENDIVES, I’D’VE, ERE, EEC, ORI  (as a partial Shakespearean quote), ATRI, ATA, OWS, OON (as a suffix, because how else?), TIE A for [Words with bow or scarf], NETH (abbreviation no one uses for The Netherlands), and more I’m too tired to list. Ugh ugh ugh ugh.

What I didn’t know before I did this puzzle: that the TV series “The Untouchables” was filmed at DESILU  studios.