We are welcoming the Universal Crossword (Andrews McMeel Syndication), now edited by David Steinberg, to the daily roundup. Click “Today’s Puzzles” if you prefer to solve in AcrossLite. You can find it here if you’d prefer to solve in another platform. 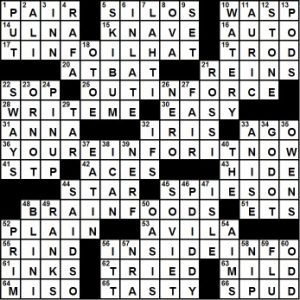 Jenni is still on the road, so I have the honor of covering for her again. 8:26 was my time–about standard for me on a Monday, though I’ve flirted with 5:00 from time to time. Enough about me.

Not recognizing the constructor by name, I peeked at xwordinfo and found that this is his first AT-BAT in the NYT. From his own write-up there: “I was born in Yorkshire, England and live in London. I’m a marketer by day, cryptic puzzle constructor by night. My puzzles appear under the pseudonym Gila in The Independent and I’ve contributed thematic puzzles for the Inquisitor and Enigmatic Variations series.”

Ali’s theme, as given away in 56a [Dirt … or what 17-, 25-, 36- and 48-Across all have?] is INSIDE INFO. And, indeed, at those answers, we find INFO spanning two words of in-the-language stand-alone phrases:
17a Paranoiac’s headgear TIN FOIL HAT
25a Present en masse OUT IN FORCE
36a “This means trouble, my friend” YOU’RE IN FOR IT NOW
48a Blueberries and fatty fish, nutritionists say BRAIN FOODS

Congrats to Ali for a nicely crafted Monday crossword. Like a Monday crossword, typically is, this one was EASY. All the answers look and feel to me as though they shold be quite accessible to the average solver. Nothing seemed inapt anywhere–an important point regarding a trivial matter I’ll address in a moment. For now, let’s shine the light on some of Ali’s non-theme fill. With 55 theme letters, he wound up with nothing longer than 7 letters in the balance, but those were nice ILSA’s: WRITE ME, quaintly clued as [Pen pal’s plea] & SPIES ON, darkly clued as [Keeps under surveillance].

The constructor also invoked an array of diverse topics:
athletes of old–35d [Jessee of the Berlin Olympics] OWENS;
drama–34d [Title character who never arrives in a Becket play] GODOT;
literature–11d [__ Goldfinger (Bond villain)] AURIC;
geography–53a [Walled city WNW of Madrid] AVILA; and
rap–46d [Onetime alias of Sean Combs] P DIDDY, to name just a few. I’d say he all the bases by the time this at-bat was over.

Now, for that little trivial matter: Earlier in the week, reviewing another puzzle, I pointed out that the constructor and editor had published a dupe of a 2-letter word in phrases that were near each other. The phrases were TENDS TO and TIE TO.

My point was that solvers don’t generally even notice this and that, even to the pickiest of editors, it’s a “non-issue” (my characterization).  The only reason I notice this type of dupe is because, in scrutinizing puzzles for review, I line up the answers in several different ways. This Monday puzzle has four answers that contain the word in: EAT IN, IN LATE,  OUT IN FORCE, & YOU’RE IN FOR IT NOW.

And I stand by my words: Nothing seemed inapt anywhere!

Welcome to the first write-up of the Universal puzzle under David Steinberg’s guidance- Judge Vic and I will be tackling these with brief summations and commentary. See the top of the post for information as to where to find the puzzle in your preferred format. Looking forward to this endeavor!

THEME: Entries that begin with single letters, which in turn spell “DEAR” 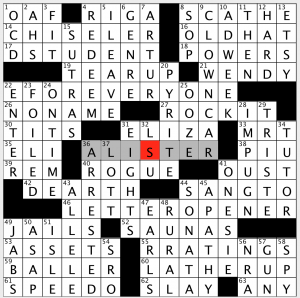 The revealer LETTER OPENER was fun as it serves a dual meaning: All entries start with a single letter, and in order they spell the common opening to a salutation in a letter- DEAR.

The title, “For Starters” is clever as well (as there are four themers excluding the revealer).

Seems a bit strange for the revealer to be neither central, nor the last theme answer in the grid, but those 12 letter entries make for difficult placement.

Also, really wanted B-BALLER to be the answer to 59-Across- but it wouldn’t fit, and DEARB is definitely not a thing!

Peter Gordon, the man behind Fireball Crosswords, takes a break from those challenging puzzles to bring us a straightforward vowel run in today’s WSJ. 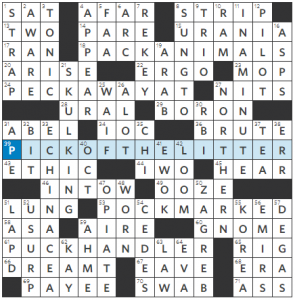 As vowel run themes go, this works fine. I’m not sure what to make of the title other than the fact that the second letter of each entry is changed. If that’s the case, this title could work with a near-endless variety of similarly-structured grids. Is that all there is to it or is there something else I’m missing?

Fine fill in IN A MINUTE, ECHINACEA, and SKULKING which is a favorite word of mine. Scrabble-lovers will like ZAGREB as well.

But that entry, as well as ECHINACEA, URANIA [Muse of astronomy], and BORON [Metalloid element with atomic number 5] seem pretty tough for a Monday. URANIA tripped me up because that U crosses SUNG TO [Wooed by a serenader]. Obviously, that’s correct grammatically, but it wasn’t my first response; I went with SANG TO and didn’t return to fix it, so I ended with the error.

And that’s all I have. A fine Monday grid with maybe a bit more crunch than usual. 3.4 stars. 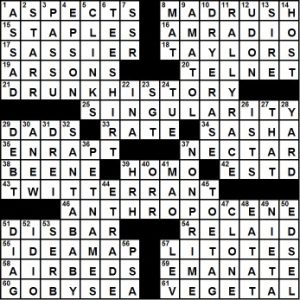 I forget exactly how I come to be reviewing today’s The New Yorker crossword. But it’s always a pleasure. This was a typically difficult Anna, and I almost enjoyed it immensely. Maybe if there’d been a theme … So, four horizontal answers just kind of stand out for me:

21a [Comedy Central show with the tagline “Sometimes the truth is a little incoherent”] DRUNK HISTORY
25a [With “the,” humanity’s greatest existential threat, per Elon Musk and Stephen Hawking] SINGULARITY
43a [Twenty-first-century screed] TWITTER RANT
46a [The current geological age, named for the impact of humans on the Earth’s systems] ANTHROPOCENE

Other stuff of note–and I’m going to let you read the clues and find the numbers, since TNY is not set up to allow copy-paste–include

DRY ERASE and RALLY RACE, side by side, a little homophonia going on there, if you listen closely.
SANTA BABY
PET NAMES
NONPRIME
TOE TAG
IDEA MAP
AIR BEDS
GO BY SEA

I started with the clock running, then, with significant gaps after 20 minutes and a need to get to work (I’m always afraid they’ll start without me), I went into wild guess mode where LITOTES, VEGETAL and NIETA meet up. Ditto UDON, RALLY RACE, SASHA, TELNET. 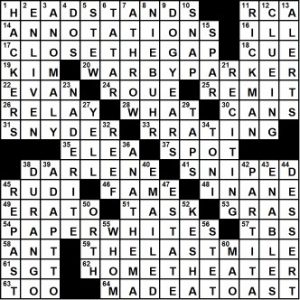 This one for me was a toughie. But, ultimately, it was satisfying to finish in under half an hour. I have a nit or two, so why not start with them?

I’d never heard of WARBY PARKER, the dba of JAND, Inc., an online retailer of glasses since 2010. Citing a WSJ piece, Wiki says Warby Parker “derives from two characters … in a journal by … Jack Kerouac.” I could have guessed this correctly if I could have come up with A THROW, a clever well-clued answer; and I would have come up with that if I could have gotten DOG YEARS from the clue [Boxer’s calculation?]. I said it was a nit–and I get that it’s pretty funny once the correct answer is revealed. But my argument is that the clue’s not cricket in saying the calculation is the boxer’s. The dog cannot calculate. If I’d guessed this correctly, I’d have been wondering, “How the heck did they come up with WAR BY PARKER to sell optical stuff?” So, maybe it’s all okay after all.

My other nit relates to 39d [Change with the times, say] ADAPT TO. I’d say the clue is apt for the answer ADAPT but not ADAPT TO. How about this: [Change with, as the times]? Okay, on to the good stuff:

What a way to start a Monday! 4 stars!

Today’s puzzle isn’t not a bunch of double negatives! 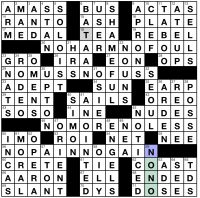 20A: NO HARM NO FOUL [Misdeed exculpation]
29A: NO MUSS NO FUSS [Done tidily and without stress]
46A: NO MORE NO LESS [Precisely]
56A: NO PAIN NO GAIN [Exercise mantra]
59D: NO NO [Forbidden thing, and what each of the four long answers is?]

I kind of liked this theme set and was surprised that there were so many common phrases of this pattern. I didn’t think the puzzle needed the NO NO revealer, though – the theme set otherwise stands on its own quite nicely and isn’t enriched at all, I don’t think, by the “revealer.”

Other thoughts:
– I Naticked at the BATAAN / TEA crossing (shaded square), largely because I’ve never heard of the [WWII Philippine battleground] and because the clue for TEA wasn’t intelligible to me. OSIER also felt tough for a Monday.
– Are Eve and MAE West the only women in this entire grid? Oh wait, there’s Kate UPTON, but she’s clued with respect to being a man’s wife and not just with respect to her own merits. Now that’s a NO NO. Oh! There’s Elizabeth ARDEN. Phew!