Posted on February 3, 2019 by LauraB
? grid (on paper during breaks at the Westport tournament); before the grid was done meta (Laura)

Thank u, Matt, for a very simple meta on a day when I have no energy left to blog a puzzle. I just got back from a whirlwind weekend in New York City, visiting friends and competing at the 20th Annual Westport (CT) Library Crossword Contest, where I got to hobnob with such luminaries as Will Shortz, the entire staff of the Westport Public Library (me, total dork, introducing myself: “Hi! I am also a librarian!”), and tournament winners Ken Stern, Glen Ryan, and Jesse Lansner (1st, 2nd, and 3rd place, respectively). The fun thing about Westport is that they don’t bother to rank anyone below the three top finishers, so the ~100 other people there all came in 4th! That’s likely the highest I’ll ever place at a crossword tournament. Okay, so judging by how many people were in the break room after each round, maybe I was more like 10th. That’s still likely the highest I’ll ever place at a crossword tournament. 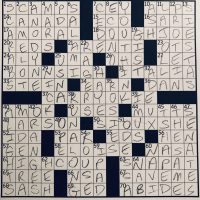 The answer to this meta is a country, and I don’t know if my spidey senses were honed to a perfect edge because I was at a tournament, or if it was the brilliant-solving-by-osmosis vibes I got from sitting in between champions Ken and Jesse, but this clocked for me at 0.25 metaweeks on the Gaffney Scale.

There is something delightfully old-fashioned about this theme’s corny puns:

Those are all things from JAPAN, which is indeed a country, and our answer.