Song titles are found hidden within common phrases. Each song title is a first name suggesting this is the person the singer is breaking up with. 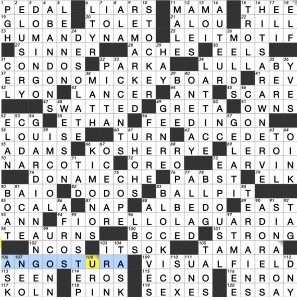 I enjoyed the heck out of this theme. The entries are all strong and I knew (or at least heard of) all but one of the songs. Sure, not all the songs are actual breakup songs, but that’s beside the point. The names are broken up, and that’s all that matters. And I’m still in awe about ERGONOMIC KEYBOARD and FIORELLO LA GUARDIA both hiding song titles and being the same length. That’s serendipity at its finest.

Another nice touch, and maybe it’s coincidental, but 74a DON AMECHE hides NAME inside.

There were however a few rough patches in the grid. In the tough-entry-but-fair-crossings category, we find:

More challengingly, we have the proper-names-crossing category:

There are plenty of highlights in the grid, though: LEITMOTIF (25a, [Recurring theme]), LULLABY, LANCER (my high school mascot), NARCOTIC (as an entry, not as a thing), the aforementioned Mr. Ameche, the [Multicolored play area] and germ factory BALL PIT, KIMONOS, and BLOCK ICE.

With those goodies in the grid and a theme that I thoroughly enjoyed, I can easily look past the stuff that tripped me up. Four stars from me. 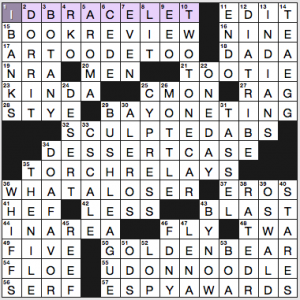 Average-ish Saturday solving time for me, no harder than usual despite a number of entries that felt a bit off or unfamiliar—the central trio of SCULPTED ABS, DESSERT CASE, and TORCH RELAYS; plus “WHAT A LOSER,” IN AREA, UDON NOODLE, I-BANKS, C SCALE, TWO-TONE CAR, and TEA EGG. I’m not saying these aren’t legit entries, just that they had a weird vibe for me.

Pander to my profession: 11a. [Get in the last word?], EDIT. I used to be a medical editor, but switched over to crossword editing about 7 years ago. Living the dream, people. 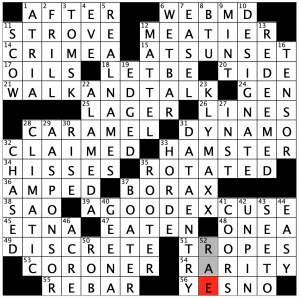 Easy peasy today. Solved in under 5 minutes. And this grid only has 66 words in it! This layout is slightly odd in that there are not many long answers, but the grid is still quite wide open. And with there not being many longer answers, the puzzle usually becomes a lot easier. Greg Johnson’s puzzles are slowly becoming easier and easier for me. A solid 4.5 stars for this one.

We will stop there. Enjoy your weekend! 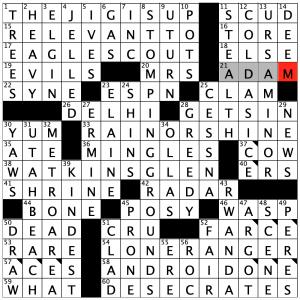 Definitely stumped today. I suppose I wasn’t in a big rush while solving this, meaning I didn’t necessarily speed solve this one, but I still was trying my darndest. I am going to fall back on the work-is-killing-me excuse, since it has been a horrific week or two and my brain is fried. Certain items I KNOW I know (38A [New York NASCAR venue] WATKINS GLEN) I just couldn’t come up with in a timely manner. Then when I did get it, I was just slapping my head in frustration. Still an excellent puzzle. I want difficult for these Stumpers, and I was not disappointed. For this 70-worder, 4.4 stars.

It is still very much winter here. Brrrr!

THEME: Antigrams- A word, when anagrammed, results in the opposite of the original meaning. 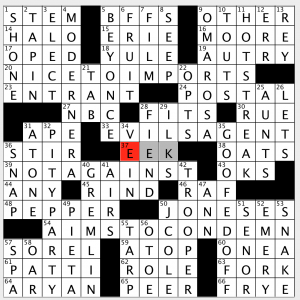 These were a lot of fun to uncover for the most part. Especially NOT AGAINST and (my favorite) EVIL’S AGENT.

I admit I struggled to understand NICE TO IMPORTS. For the longest time, I thought it was referring to imports from a city called NICETO (perhaps in Argentina?). But that seemed too obscure/specific. Rather it means the quality of being NICE TO IMPORTS. Still feels a bit weird.

A good time was had overall. You can find a bunch of these here (“A Volunteer Fireman” = “I Never Run to a Flame” Hahaha!). From my cursory search, I only noticed EVANGELIST/EVIL’S AGENT listed from this puzzle.