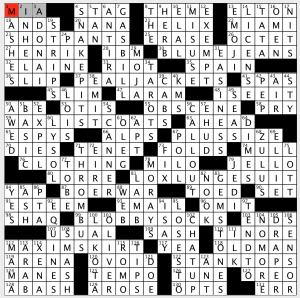 I thought for certain this was an “add a letter” theme where the added letters would spell something clever once solved. But as I traveled southward in the puzzle and tried to figure out the hidden message, I had SML??LM??. I was pleasantly stumped. It didn’t help that I had spelled BLUME incorrectly (Bloom). And although I had P??SSI?E CLOTHING, I just couldn’t see PLUS SIZE. Once the revealer fell into place, it made a heck of a lot more sense, and it explained that two letters (XL) were added to a couple of base phrases. Aha moment! 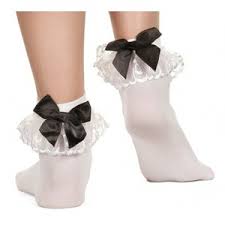 Bobby socks! I don’t think they’d look that good on me…

My favorite entries were BLOBBY SOCKS and STANK TOPS. Although I’ve never heard of BOBBY SOCKS, it was inferable and there’s something very enjoyable about the resulting BLOBBY SOCKS. Say it aloud. Go ahead. Fun, right? STANK TOPS feels grammatically off with the clue [Summer wear worn by one who reeked?] though I can’t pinpoint why, but I still find it to be one of the more colorful theme answers.

3.8 Stars from me. I liked the bite and the unexpected revealer that helped me understand the theme. 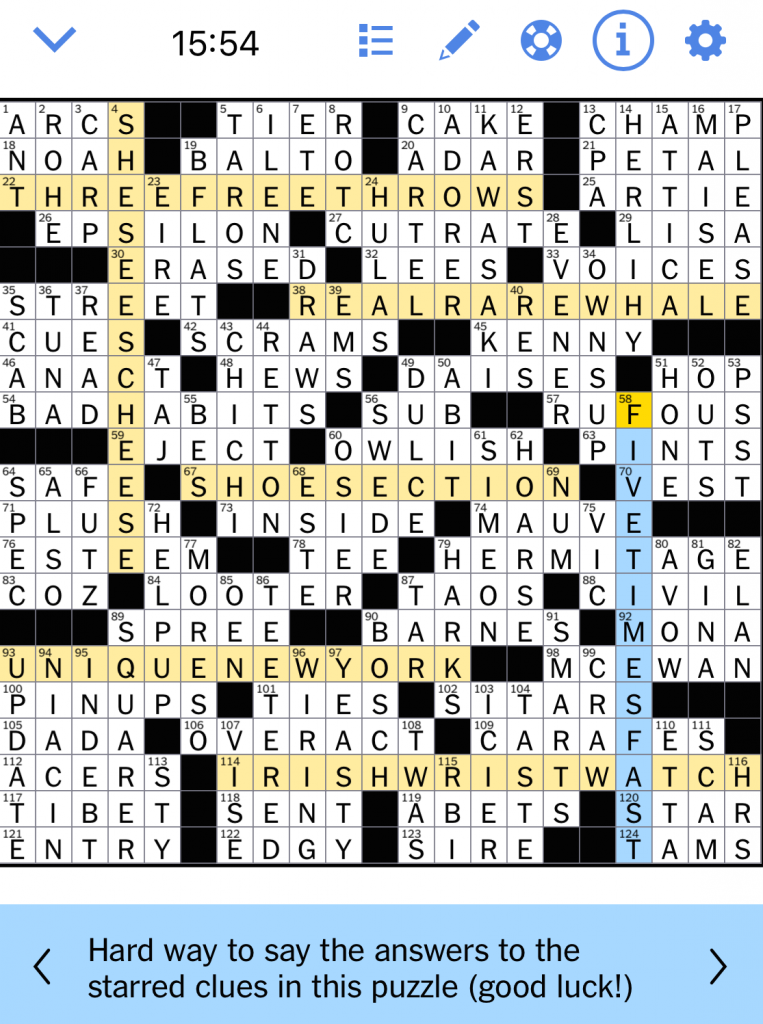 I was out to dinner a couple hours after the puzzle came out, and figured I should get started on the puzzle on my phone. Remind me not to ever solve a 21×21 puzzle on my phone! I was genuinely astonished that I didn’t have a bunch of typos at the end, because I had caught and fixed maybe 25 of them as I went along. No idea how the puzzle really is on the difficulty spectrum.

Anyway! At least the app highlights the theme for me so I don’t have much to explain. The blue revealer is FIVE TIMES FAST, and really, my tongue twister requirements are just to say it three times fast. The yellow themers are THREE FREE THROWS (I can’t say it 3 times), REAL RARE WHALE (can’t say 2x), SHOE SECTION (2x), UNIQUE NEW YORK (1x), IRISH WRISTWATCH (1.5x), and SHE SEES CHEESE (1.5x). I hadn’t really seen the puzzle title before I started the puzzle, so it took me a while to grok the theme. I tell ya, FIVE TIMES FAST is excessive! Please let me know if you can wrangle that with any of these tongue twisters.

There wasn’t much spice in the non-theme fill. I did like BAD HABITS and KAWASAKI. ADORER, EVENER, and SQUARER were a bit jarring with the awkward -ERs, though.

The most logical way I can figure to explain the theme is to look first at the 19-letter central horizontal entry, which is obviously a reveal: 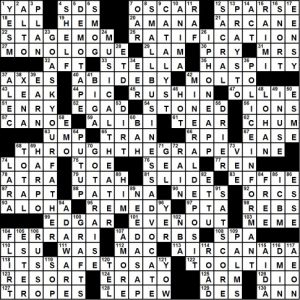 68a How juicy bits may be acquired, or how this answer runs? THROUGH THE GRAPEVINE

So, this answer goes through something having to do with grapes? Perhaps that something may be gleaned from obviously-related vertical entries:

Editor David Steinberg has notified constructors that there cannot be circles in the grids of Universal puzzles, but that he was prepared to do “work-arounds” where appropriate and feasible. So, here is a work-around. Rather than gleaning what’s on these vines via circled letters or shaded squares, one must count within these vertical answers to come up with MALBEC, SYRAH, MUSCAT, PINOT, and MERLOT–types of grapes.

Pretty clever! And the five theme answers, with their excellent punny clues, are great stand-alones! (Okay, SMALL BUSINESS ADVOCATE may be a bit of a stretch, if you’re looking for dictionary support, but I’ve known so many people over the years who were clearly small business advocates that, as a theme answer, I think it’s fine! YMMV.)

Other good—and I mean really good—clue-answer combos include:

The price for such an array? Thirty-eight 3-letter answers, plus a modicum of semi-clunkers such as YER, ET TU, ESSE, & ESME. But these did not distract me or detract from the enjoyment! 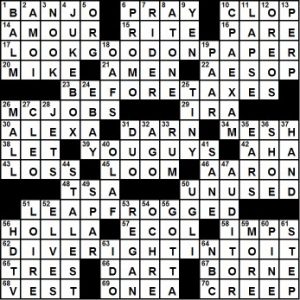 Theme: The saying “Look before you leap” is featured by having ILSA’s that start with each successive word–
LOOK GOOD ON PAPER,
BEFORE TAXES,
YOU GUYS,
LEAP-FROGGED—
capped off with a clue-dependent reveal:
[Ignore the advice at the starts of 17-, 23-, 39- and 51-Across] DIVE RIGHT INTO IT

Other items of note include:

I like today’s LAT better than the NYT, which is a fairly low bar. I enjoyed the LAT theme and wasn’t deeply distressed by the fill.

Each of the theme answers is a familiar phrase with “re” removed from the first word. “Re” means “again” so we have “Not Again.” 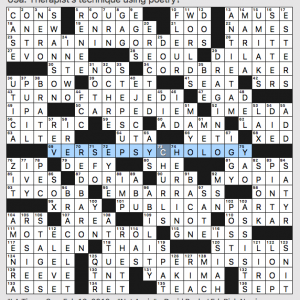 What I didn’t know before I did this puzzle: I’d never heard of ONI, the Office of Naval Intelligence. They’re the second hit on Google after the demons or trolls found in Japanese folklore.