Well! Tonight I learned that I am way behind on my slang for the female genitalia. The puzzle’s called “The V-Word,” and the Inkubator team is bringing attention to the V-Day organization that funds efforts to eliminate violence against women and girls (cis, trans, fluid) in the U.S. and around the world. You can click that link to learn more about V-Day and make a donation, if you are so inclined. 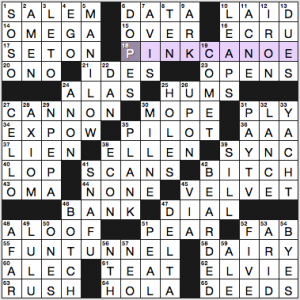 As with past Inkubator offerings, I’m digging the overall feminist vibe. Heck, there’s even a vibe in a clue: 36a. [Battery size for your vibe], AAA. Some highlights:

Did not know: 62a. [Company that makes breast pumps and kegel exercisers], ELVIE. Holy moly, they make a wireless, tubeless, wearable breast pump. Being able to pump milk hands-free and without being leashed to a machine sounds awesome.

Other womanly content includes a SALEM Witch Trials citation; 15a. [“We all fight ___ what the label ‘feminism’ means, but for me, it’s about empowerment”: Annie Lennox], OVER; Yoko ONO; PILOT Amelia Earhart; EX-P.O.W. Maj. Rhonda Cornum; ELLEN DeGeneres clued via wife Portia; SCANS clued with mammograms; [Dutch nana] OMA, which could also be German; ALEC Baldwin clued via Tina Fey’s show that he was on; a TEAT or [Nipple]; a Paula Abdul song and Sigourney Weaver movie; Titan goddess LETO; Simone Biles’s LEAPS; IRON-deficiency anemia, not uncommon in those who menstruate;  Jacqueline du Pré’s CELLO; Salt N PEPA; Kanga in the MILNE clue; BOTCH with a boob job clue; and Anaïs Nin’s “DELTA of Venus.” All told, over a third of the puzzle fits this category. It’s a bit like being cooped up in a musty, dank cellar for weeks and emerging into a sunny, 75° June day. “This? This was out here waiting for us? We should have come out long ago!” 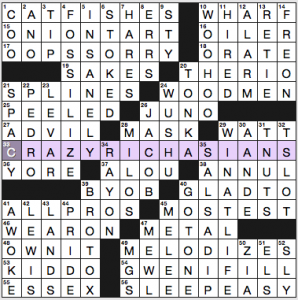 Sculptor and jewelry designer Wyna Liu‘s debut was a month ago, with a themeless AV Club puzzle. And here she is again with a terrific Friday NYT that was harder than I expected it to be. It didn’t help matters that I gambled on the wrong movie for 33a. [Highest-grossing rom-com of the 2010s], trying CRAZY STUPID LOVE (never saw it) instead of CRAZY RICH ASIANS (haven’t seen it yet, but will).

Besides the movie title, other fill I loved seeing includes CATFISHES (with the [Misrepresents oneself to on the internet, in a way] sense), “OOPS, SORRY” (so much better than the OH IM SORRY that I tried first), MOSTEST (I went with BESTEST there, an equally cromulent word), GWEN IFILL, WIN AT LIFE, and WU SHU. This puzzle is winning at cruciverbal life.

Maybe the puzzle was way easier than I found it—I mean, if you didn’t take those 4+ wrong turns I took.

4.5 stars from me, for all the fun and fresh fill. 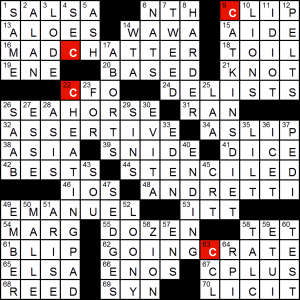 Letter addition is a very common Friday trope at the LA Times crossword, and today is another example. Often, we get no revealer, but today there is CPLUS wedged into the bottom-right corner. It’s pretty bare-bones as revealers go, and I’m not sure it adds a whole lot.

The four themers are arranged in the two-across two-down style usually preferred earlier in the week. This is arguably the optimum arrangement for clean fill though, so is never unwelcome in my eyes. CPLUS as a theme is quite basic, but GOINGCRATE and CATKINSDIET are clued amusingly – one as what is basically my fiancee’s Uno, and the other as a (hardly complete or tasty) vegan diet.

Note to readers — this is the last CHE puzzle I’ll blog; Vic will be taking over from here on out. You can still find me at the WSJ Contest writeup every Sunday night, and whenever there’s a Fireball contest. It’s quite fitting, then, that today’s puzzle is by the Fiend’s own Dave “Evad” Sullivan, since I took over covering the WSJ Contest from him. 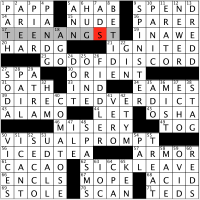 Dave has for us today some base phrases that get re-parsed into wackiness when we think about them as street addresses ending in common abbreviations, like so:

I will always love a “reparse the phrase to make a new wacky phrase” theme-type, and this exemplifies the genre! It’s likely that PT is the least common abbreviation (for Point? are streets called that?), so that one stood out as just slightly strained, but the rest of the set are lovely. Nice work, Dave! Or should I say, D Ave.

Thinking about [9d: Miss in the Jane Austen canon, maybe]: SPINSTER. Hmmmm. It is true that this was the legal term for an unmarried woman well into the time when Austen was writing, but even in her era it had taken on a pejorative sense — so that Anne Elliot, in Persuasion, who at the beginning of the novel is unmarried at 29, would be a definitive spinster, and not in a good way. Were I to clue SPINSTER in an Inkubator puzzle … well, I’ve seen the term reclaimed (like queer or bitch) by friends of mine who are not currently in partnered, heteronormative relationships, so I’d proclaim it in solidarity with those who would like to divest it of its derogatory power. #SpinsterPride!

Don’t think I’ve seen left/right symmetry in the Universal yet- these are great finds as none feels at all forced.

I balked at 44D [Sitting at a red light, say] IN IDLE. I wrote IDLING, which seems way more correct.