Our theme entries are phrases that include the word “back.” However, that word does not appear in the entries; instead, the word immediately preceding “back” is written backwards. 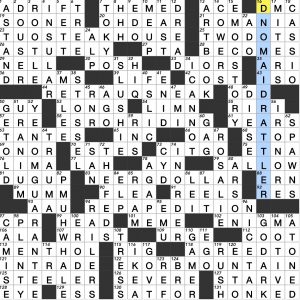 I enjoyed sussing out this theme, but I know this gimmick’s been done before, and I feel like it was done recently. I found a Paolo Pasco example from the LAT four years ago, but I want to say I’ve seen it more recently than that, though I can’t find it.

My big problem with the execution of this theme is the decision to place some entries in the Down direction. In my book, there’s no way that “back” means “up.” And so I want to read the D0wn entries as “diamond-up rattler” and “hump-up whale,” e.g. I felt that was a big negative factor to this puzzle.

And the surrounding fill didn’t do anything to redeem it. Entries like random-sounding TWO DOTS and ART BOOK, roll-your-ownish DOUSER and RAILERS, and alphabet soupy AAU, HHH, HI-Q, FSLIC, RNR, and ELP all served to weigh the grid down.

I did like a few things like SLUSHIE, “NICE TAN,” and GO DARK, but those were few and far between with 10 full-length themers dominating the grid.

My favorite moment in the solve was at 34d [Admission of inability]. Even though the answer was I CANNOT, the clue immediately brought to mind my then-2-year-old whenever she couldn’t do something she desperately wanted to do. With the weight of the world on her shoulders, she would shake her head, and with a sigh and all the seriousness a 2-year-old could muster, she would proclaim, “I can’t do it.” The rest of us got such a kick out of her solemnity that this quickly became a catchphrase in our house whenever any of us tried and failed to do something. (Rest assured that the 2-year-old is now a happy 10-year-old who excels in school and is engaged in many activities from robotics to musicals.)

But back to the puzzle. I think it would have been better served with fewer themers (preferably after excising entries that have been seen in other grids) and keeping them all in the Across direction. This would have allowed for a more open design and presumably fresher, funner fill. As it is, three stars from me. 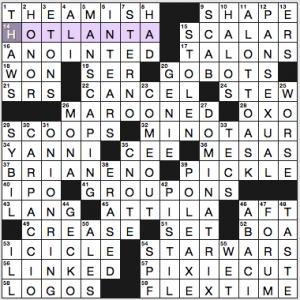 Worst crosswordese: It’s a tie! 33d. [People on the case, for short], TECS. First I had ATTS, attorneys. Then I had DETS, detectives. But it’s tecs, old-timey slang of some sort for detectives. 3d. [Some prep school wear], ETONS. I suspect those collars or what-have-you aren’t worn in American prep schools, and the British don’t refer to Eton College as a “prep school.” Bleah. 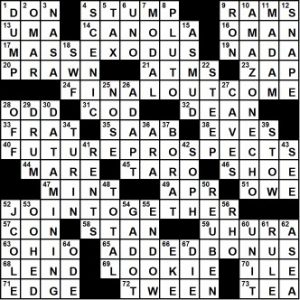 How redundant can a theme be?!

Two 10’s, two 12’s, and a 15!! That’s ambitious. No room for much else on the horizontal. On the vertical, though, with nice cluing, we get AMAZON ECHO and DATA MINING. Plenty enough, if you ask me. A solid, clunkerless, 3.5-star effort! 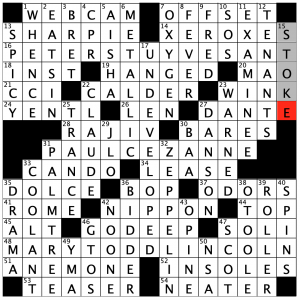 We have a theme! I didn’t notice it at first, but after scanning for things to discuss, I noticed something that tied the three long entries together, other than them all being proper names:

Get it? Peter, Paul and Mary were a singing group, and I am a little surprised younger ones know who they are. Are they even still alive? Anyway, a great puzzle even without having a thematic element; this was a wide-open 68-worder that was fun to solve. I was not rushing on this one, I think, which was why my time was over 7 minutes. Or maybe it was a little harder than I remember. A solid 4.7 stars for this one.

More fun things from this puzzle:

Have a splendid weekend! 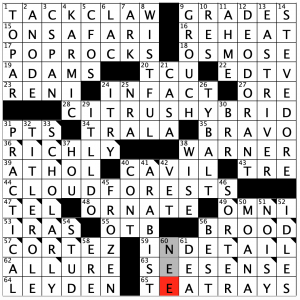 This one stumped me. I haven’t had this much difficulty on a Stumper in quite a while. I was literally going to redo this puzzle in another solving app so you wouldn’t see all of the error marks. But I will be honest and display that I had all kinds of problems, especially in the lower left corner. This one was brutal, made me feel stupid, and I was highly frustrated. Part of that is solving joy isn’t as great when you have a blogging deadline, especially on these harder puzzles, but I get the grids in plenty of time, so that usually is not an issue anymore. There were some highly stressful Saturday mornings a few years ago when I am staring at a blank grid at 9:00 am wondering how I am going to finish!

So if you found this puzzle hard, I can relate. I would classify this as nothing less than a struggle. I really hope I see someone doing this downs-only on Twitch and see how they do. Although when I say that, they only make me feel even more inadequate in my solving skills! A solid 4.6 stars for this headbanger!