I have to admit I wasn’t paying very close attention to this puzzle while solving. I did it on my phone while sitting in a Menchie’s waiting for my daughter to finish her too-full tub of frozen yogurt. It took us about the same amount of time. 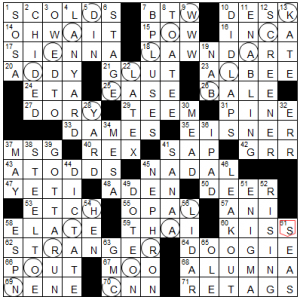 My phone app didn’t show any circles, so I was surprised by the revealer at 52d: [With 61-Down, global warming consequence, and a hint to the circled letters]. Not seeing any circled letters, I finished the solve as if it was themeless.

Looking back now, I can see why RISING / SEAS was not making much sense; these would be hard to find without the circles. Each set of circles spells out the name of a world sea going up diagonally to the right. In order, we have DEAD (Middle East), YELLOW (East Asia), BLACK (Eastern Europe), NORTH (Western Europe), and CORAL (Australia).

Nicely done. Even though I didn’t need them to solve the grid, it was a nice surprise to finally see these thematic elements. And even though they’re short and there are no other constraints in the Across or Down directions, these definitely do put constraints on every part of the grid.

Because of that, there aren’t any what I’d call “marquee” entries in the fill. We do get a clutch of nice 8s though, like STRANGER, SCREENER, STEEL TOE, and GOTTA RUN.

Oh, and LAWN DART [Projectile banned by the Consumer Product Safety Commission]. I can see why. When I was in 3rd grade I nearly killed (or at least seriously hurt) my friend Bobby with one of these. I threw it way high up in the air (it seemed to me) and then, being a stupid kid, got distracted by something else. Thankfully Bobby saw it at the last second and jumped out of the way, but it was a close one. It was the actual death of a girl that did lead to the banning of this product. And there was no LAWN DART lobby around to fight it. Remember, people don’t kill people, lawn darts kill people.

I also thought it was really interesting to see LIDAR [Modern speed-detection system] in the grid. My brother works for Velodyne LIDAR developing the technologies that will allow vehicle-to-vehicle and vehicle-to-infrastructure communications, so I’m sure he’d get a kick out of this…if he did crosswords.

There are some challenging bits as well, especially NEPHRON [Kidney unit] for which I needed just about every cross. Amy, can you give us a ruling on this word? {Amy says: That’s solid. You’re lucky you weren’t asked to come up with GLOMERULUS or PODOCYTE.}

Some other entries that raised my eyebrows were:

All in all, a fairly nice construction and a well-executed theme. 3.7 stars. 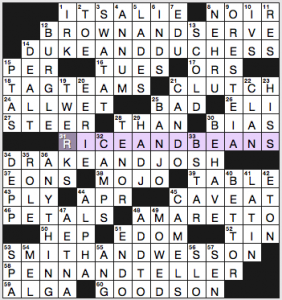 This 15×16 grid is elongated to include a central pair of themers to go with the top and bottom pairs. Our revealer is in a weird spot: 7d. [URL ending associated with the beginnings of the answers to the six starred clues], EDU. Those theme answers begin with the names of a college and five universities:

Between the and/’n/ampersand issues and upenn.edu, I have to dock the theme some points. It looks cool to have three stacked pairs of theme entries, but it’d be better if the theme itself were rock solid.

Fave fill: BURGLE, because it sounds funny. ORESTEIA, because literature and the classics. BANJO/MOJO, two words that don’t go together (and do not intersect at the J!). AMARETTO, TWERKS, TAG TEAMS.

Name I’m not sure if anyone younger than me knows, unless they’re game show junkies: 60a. [Mark ___, longtime game show partner of Bill Todman], GOODSON. The old Match Game was “a Mark Goodson/Bill Todman production,” and if you’re an American my age, you can likely hear the announcer’s voice saying that. 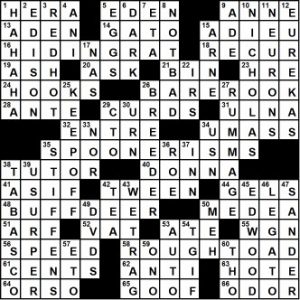 It appears that we have a standard Spoonerism theme here. Tightened up, perhaps, by each two-unit entry’s latter item being a creature. Each answer’s first item gives a description of sorts. There’s a center reveal that strikes me as superfluous. And the theme execution has some slippage, if you ask me.

Highlights from the Downs include:

That a nice baker’s dozen of longer words and ILSA’s. 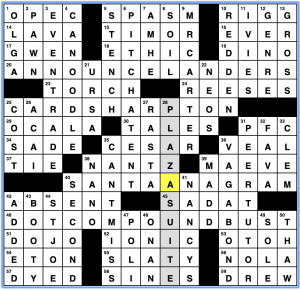 There are constructors whose wavelength I know I will be on, and there is Byron Walden.  I like his puzzles!  Today’s NYT was delightful!  It also took me longer than expected because the way his brain clues and the way my brain solves clues are never to meet.  That said, I was right on track with what would be happening with the theme answers in “Putting on Some Weight”:

You’re adding weight (or some measure of weight, anyways — we’ve got OUNCE, TON, GRAM, and POUND, almost all of which my kitchen scale covers as options) to the end of one of the words in an otherwise standard name or phrase (ANN LANDERS, CARD SHARP, SANTA ANA, and DOT COM BUST) and getting something new and wacky.  SANTA ANAGRAM is what fell for me first.

The Avengers is one of my favorite all-time TV shows, and I’m actively mad it took me most of my solve to realize the answer to “Peel player” was Diana RIGG

As mentioned above, something about the way Byron clues just whizzes past my brain’s usual ability to recognize things I otherwise know.  “Training space that may have taiko drums” made me think sumo something-or-other rather than DOJO. “Foul aura” made me think MIASMA rather than the clearly better (for that grid space) STENCH!  I kept trying to make NANO (again, clearly correct for a numerical prefix meaning dwarf!) be NINE, which only fits the “numerical” part of that particular equation.  Ah well. 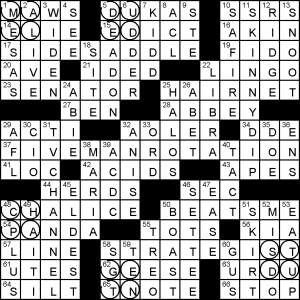 I’m not familiar with the base phrase (hah) FIVEMANROTATION, but appreciated how it’s used to create this engaging theme concept. There are five boxes are four letters, and each spells out a synonym for MAN as in “male human” – MALE, DUDE, CHAP, GENT, STUD.

Curious if others battled with the tight knot of answers in the middle left – AFL and CIO are clued circularly, so we’re left with ACTI and LOC (what? local abbreviated?) to try and dig our way out. That is where I finished the puzzle.