Maybe it would have helped if I remembered the title while solving. When I glanced at the title before the solve, I guessed correctly what the theme would be, but by the time I actually started, that little thought had flown out of my head.

No matter, despite being befuddled by the theme during the solve, I finished, and it all made sense afterwards. The common phrases in each theme answer all contain the bigram IT, but the clue requires you to read the entry without IT. 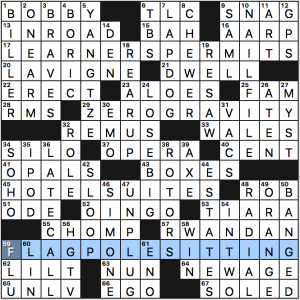 Despite the fact that “pole sitting” seems more common to me, this works well. There are a lot of phrases using “it” that could be bases for themes (“lose it,” “drop it,” “give it to me,” etc.). “Just ignore it” joins this list, and it could lend itself to a fun “a-ha” moment if you were none the wiser to begin with.

Moving on to the fill, I had trouble with the spelling of YANGTZE (no doubt because I’ve been ruined by the game Yahtzee). I managed to spell the crossing LAVIGNE correctly, but I wonder if that G caused some grief among solvers.

Other goodies: NAIL FILE, LOSE BIG, RWANDAN, LAPDOG. What say you to LATE CALL? I like the entry, but it’s clued [Game-deciding judgment] which, I think, is saying it’s a decision made late in the game. That’s not how I normally hear that phrase. To me, it means a penalty that a ref or ump calls well after the play is over. Or am I conflating it with “late flag” in football?

I had a lot of missteps throughout the grid:

No doubt, that’s all part of the late-in-the-week design in which ambiguous clues are there to slow you down. 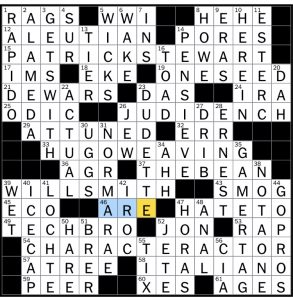 Hello crossword friends!  Starting in March, Andy and I are going to be swapping who covers the NYT and BEQ Thursday puzzles.  He’s out on vacation this week, so I’m filling in as a nice ramp up to that.

I’ll keep this one brief, since this review’s a little later than planned, and since this Thursday’s NYT isn’t as quirky as it usually goes.  It felt right to be solving this puzzle on Wednesday, since it felt like a Wednesday puzzle. The revealer for this one shows that it’s all about CHARACTER ACTORs — that is, actors who have played characters whose names are one character:

And that’s that!  It’s an unusually straightforward theme for an NYT Thursday, and I don’t have much to say on it beyond that.  Looking at the other fill, which I’d want to be pretty clean on a concept as straightforward as this, the short fill could be a little better. WWI, HEHE, IMS, EKE, DAS, IRA, ODIC, AGR, ECO, and XES are structurally necessary for some of what’s going on in the crossings.  I liked some of the longer downs like PENSIEVE, NORMA RAE, ICE CAP, and swimmer Ryan LOCHTE.  Not a fan of DUDETTE – I associate that term with gross TECH BRO behaviors that prioritize being one of the guys that too often keep women out of those fields.

That does it for this week – goodnight, my insomniacs. 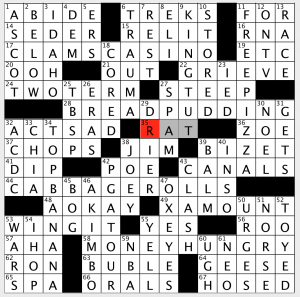 This puzzle reminds me that I haven’t eaten yet today.

THEME: Popular dishes that start with a slang term for “money.”

There are also two other food related answers that are symmetrically placed:

11D [College event incentive] FREE PIZZA and 34D [Head of Chiquita?] TOP BANANA. My college never offered me free pizza. Did I miss out on something? Damn.

Fun puzzle, but I feel like I saw this same theme very recently. A quick search doesn’t turn up anything though, and it didn’t hinder my enjoyment. 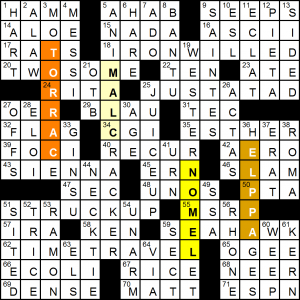 This theme flies under the radar more than most. For starters, it’s all in the down answers. Also, the thematic parts aren’t circled, so they’re more cryptic than is typical in the LA Times. The revealer is the central JUICEUP, and four juices are hidden running backwards from bottom to top in four long down entries. I appreciated that only two of the four were fruits, with one vegetable and one animal mixing up the flavours (even if clam juice is disgusting).

Not really much to highlight otherwise, for better or worse: 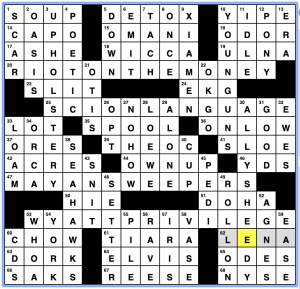 Today’s BEQ is a nice twist on a swapped vowel sound theme:

In this case, RIGHT ON THE MONEY, SIGN LANGUAGE, MINESWEEPERS, and WHITE PRIVILEGE all get a little tweak.

The rest of the fill on this was pretty nice — I liked WICCA, DOHA, ELVIS Costello, UPHOLSTERY, XIAMEN, OK GO, and SEAHAWKS