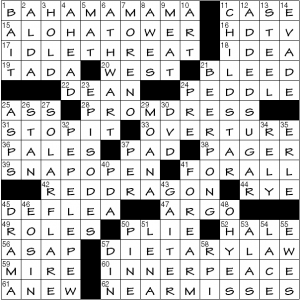 Pinch-blogging for Amy this evening.

Despite falling into what must have been a deliberate trap at 1-across—figuring the [Rum drink popular at beach bars] was PIÑA COLADA rather than BAHAMA MAMA—my solve for this puzzle was rather speedy. So many of the As coincided! Other reasons: PIÑA COLADA is probably more iconic, and it’s a more common crossword entry (especially as the partial PIÑA).

Anyway, the northwest and southeast corners feature triple-stacked 10s. The island vibe continues immediately below the opener, with 15a [Hawaii landmark featuring four seven-ton clocks] ALOHA TOWER; unfamiliar to me but made much easier by the telegraphed clue. >checks calendar< Yep, it’s a Friday puzzle. Weird. That block is then backed up by an IDLE THREAT (17a).

Down below, it’s Kosher DIETARY LAW, meditative INNER PEACE. and rounding out with NEAR MISSES (57a, 60a, 62a)

Long entries among the downs include 11d [Temple, for one] which is rather open-ended (religious building? Philadelphia university? cranial feature?) until a few crossings point to CHILD STAR Shirley; 12d ADDED SUGAR (37a [Fill out] PAD); 27d SOLAR FLARE; and 32d PEPE LE PEW.

Typical to late-week crosswords, there’s an uptick in oblique/ambiguous clues relying on homonyms. Including but not limited to: 1d [Chum, e.g.] BAIT, 21a [Run] BLEED, 24a [Hawk] PEDDLE, 38a [A resident might carry one] PAGER, 49a [Parts] ROLES.

Time to get this thing posted!

All in all, a solid Friday offering. 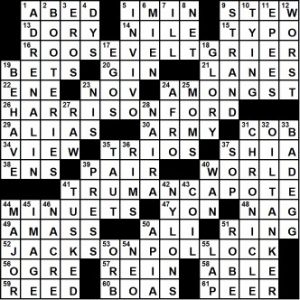 (Effective immediately, I’ve accepted the job of reviewing the CHE crosswords, as Laura doubles down on her Inkubator project with Tracy Bennett.)

An unfamiliar name pops up in the CHE byline this week. Marie Gillette Speicher has constructed a crossword puzzle that I like a lot! Last names of presidents can be first names of other people:

As is often the case, with so much horizontal theme matter, there’s not a lot else to remark on in the Across arena. But a few items did catch my attention:

And then there were a slew of nice Downward entries. E.g.: 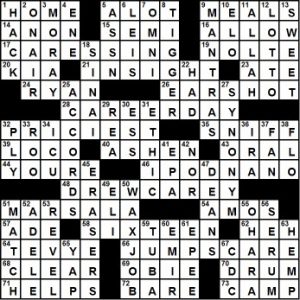 Here we have a journey, from the NW corner’s HOME to the SW corner’s CAMP, of a Care Package. To wit: 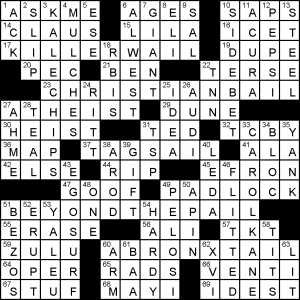