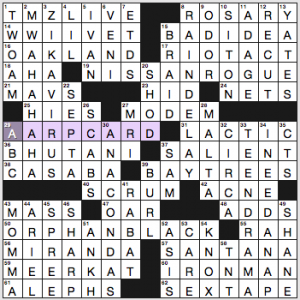 Well! I wasn’t expecting a Wednesday sort of solving time for the Saturday puzzle, but Sam’s fill is right in my wheelhouse. So much zippy stuff! There’s TMZ LIVE (which is largely trash, I think?), a WWII VET, the NISSAN ROGUE (which had a heavy-handed product placement on NBC’s Heroes when it was new—The Cheerleader squeed with delight when her dad gave her a Nissan Rogue, which she exclaimed about by name as if all the teens were begging for … the Nissan Rogue), AARP CARD (not actually [Evidence of eligibility for senior discounts], since a 50-year-old is eligible for very few “senior” discounts), BAY TREES, ORPHAN BLACK (which I still have never watched), a MEERKAT, “MWA HA HA HA,” ZIKA VIRUS, and a baseball RAIN DELAY.

Thing that struck the wrong chord, topically: 62a. [Celebrity embarrassment, maybe], SEX TAPE. Saw a story about the R. Kelly indictment that referred to “sex tapes,” but when a grown-ass man is abusing a minor, that’s not a sex tape, it’s more of a rape tape. Which rhymes! Why hasn’t that caught on?

4.25 stars from me. Fun puzzle, no acute junk that made me scoff.

Nate CARDIN here, subbing in for our normal Saturday hero, to cover the WSJ: 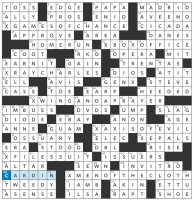 23A: XGAMES OF CHANCE [Skateboarding competition where the judges give random scores?]
32A: XBOX OFFICE [Room at Microsoft HQ?]
47A: XRAY CHARLES [Take a critical look at British royalty?]
62A: XWING AND A PRAYER [How the Death Star was destroyed?]
83A: XAXIS OF EVIL [Sinner’s graph line?]
96A: XFILES SUIT [Get-up for investigating the supernatural?]
111A: XMEN OF THE CLOTH [Fighters for religious justice?]

Ok, I really liked this theme! There’s a lot of really strong theme fill and all of it felt necessary to the puzzle. It certainly didn’t feel like any of the theme entries were less than top notch, and I also can’t think of many more themers that would fit so nicely with this set. My favorite was XMEN OF THE CLOTH – what cool imagery. I’ll begrudgingly admit that I know I like I puzzle when I’m annoyed I didn’t come up with the theme! : )

Other random thoughts:
– I loved the clue for MADRID [Real city?] and the clever sleight of hand with MIT as a [University of Cambridge]. [Street on a hill] for PICABO was also a lovely clue. The winner for my favorite clue of the puzzle, though, has to be [Irony?] for FERRIC. So good!
– I never remember the studio RKO no matter how many times it shows up in puzzles. It’s that and vsop that always give me trouble!
– I liked the inclusion of GENX in the fill and thought that might even make for a nice alternate title to “Marking the Spot” for this puzzle.
– 109A was a lovely surprise, for obvious reasons.
– Something I learned today: [Aa and pahoehoe] are types of LAVA!

Loved it and can’t wait for more from A E-S! 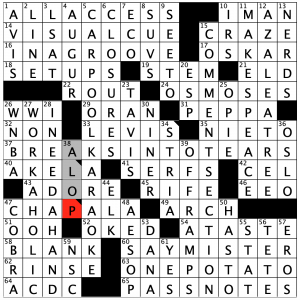 Fellow blogger Jim is front and center with the LAT Challenge puzzle this Saturday! I solved this rather quickly, but again, I am in vacation mode. By the time this is posted, I will be in Florida ready to set sail! 70 words in this themeless, which I actually liked a lot. Just because you solve a puzzle quickly doesn’t mean it isn’t enjoyable! There were lots of entries in here I don’t remember seeing too many times before; I am spoiled by xwordinfo.com and the ability to see what entries in a NYT puzzle are new. Perhaps that sort of functionality will be commonplace in the future? 4.6 stars for Jim’s puzzle today!

Some of the stuff I liked:

Have a splendid weekend! 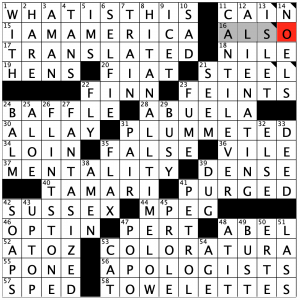 So last week, the Stumper nearly killed me. It had been a while since the Stumper actually made me angry, but last week did it. I felt a little better watching Andy Kravis solve it on Twitch with just the downs, but I still think he finished faster than I did! Fast forward to this week: I flew through the NW corner, and I just knew I was in for a great time. And then I got into the rest of the puzzle, and it turned into a true Stumper. I count 72 words (OK, CrossFire counted!), which explains the good fill, but there are some really difficult clues in here. Nothing overly obscure; just really, really hard. Which is how it is supposed to be! 4.5 stars today.

Some of that hard stuff, among other things:

As mentioned before, this is my last post until Tuesday, 3/5. I may lurk while on vacation, but no promises. See you all in a week or so!

What a fowl puzzle today! 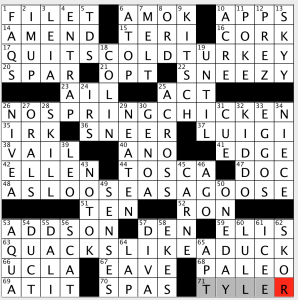 These are all great finds as they stick to a very specific category of bird and they’re all extremely familiar phrases. The clue on 63A felt a bit clunky compared to the rest (and the answer seemed like it was more directly related to the actual animal than the others), but its placement as the last themer made it easy to uncover.

Clean fill all around with a meta-wink at 25D [First word in a clue list] ACROSS. The first word in this clue list was FILET… which is decidedly not part of the theme!