Erik Agard’s New York Times crossword, “Everything Evens Out in the End”—Amy’s write-up 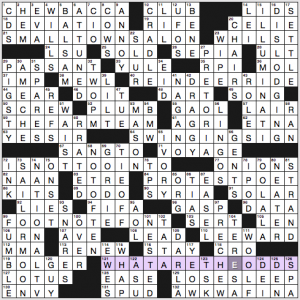 NY Times crossword solution, 2 24 19, “Everything Evens Out in the End”

The theme revealer/explainer is 121a. [“How lucky was that?” … or a hint to the answers to the starred clues], “WHAT ARE THE ODDS?” Each of those theme answers ends with a 4- or 5-letter word that consists of the odd-numbered letters from the word(s) that precede it:

Erik’s dressed up the corners with stacked 9s and 10s. CHEWBACCA (neat clue: [Solo partner], as in Han Solo), LOSE SLEEP, AWKWAFINA, SAILOR MOON, and the ILLUMINATI are highlights.

Easyish puzzle this time, no? Four stars from me. 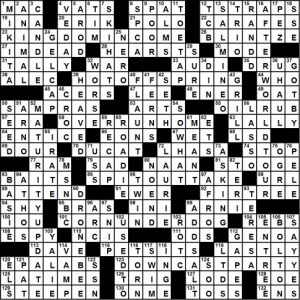 It’s been a long day. This will be a short review.

Each theme answer has a preposition added to a base phrase to match the wacky clue.

A solid theme. Some of the answers made me smile and might have made me giggle if I weren’t so tired.

What I didn’t know before I did this puzzle: that PEZ were invented in Austria. I’ve also never before seen BLINTZE spelled with an E on the end.

Hope you’re starting your day off on a high note after solving this puzzle! (see what I did there? Hahaha! Ha. ugh.)

THEME: Names of notes from the solfege scale (think “Doe, a deer, a female deer…”) appear above where they should be in the theme answers.

THEME ANSWERS: *Note: I am using the clue numbers from the .PUZ version since that is the grid image I am including (clues are numbered differently in the print version).

While I had a feeling this would be a puzzle based on the notes of the scale (from the title), it still took me a while to figure out what was going on. At first, I thought random notes were being blacked out; I didn’t realize that they appeared in the across answers directly above where they “should’ve” been. I jumped to the revealer early (120D) after floundering around for a while, and that helped clear things up. And it’s also one of those themes that works synergistically with the fill, where the solver can figure out tricky areas with some deductive reasoning. My favorite! 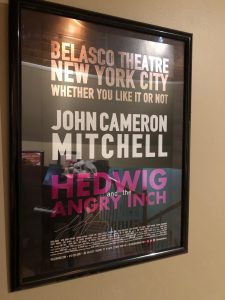 Poster on my wall. Saw it four times with four different Hedwigs. Love the movie too. Still didn’t know SHOR!

Still, this was one of the harder Birnholz puzzles I’ve solved in recent memory. Feels like there were a lot of tough names and perhaps some niche terminology (like CORDON and RETREADS). Fill I struggled with in the Names Department included Princess CHARLENE,  ABE Fortas, Rupert EVERETT, SID Meier, Hans LANDA, AVA (as clued), HASAN Minhaj, Horatio SANZ, Prue LEITH, DAN Simmons, DEVA, and Miriam SHOR (despite being a fan of “Hedwig and the Angry Inch”). Thank goodness crossword friendly Nin ANAIS, Georg SOLTI, TORI Amos, and ETTA Jones all came to help! MCLOVIN, SARA (of Tegan and Sara), and Neil SIMON were also on my wavelength.

Other fill like TEXAS TEA, NBA COACH, ST. JAMES, WAVE TANK, CALLS UP, CATS EYE, THE FAN, and DO AS I DO helped to keep it fun.

Kudos for the notes of the scale ascending in order! Although they appear to go down in the grid, the scale itself is going up.

Overall this was a high quality puzzle- the tougher fill felt like it was just that: Tough. That’s not a bad thing. While I would’ve preferred fewer names, there wasn’t anything there that I wasn’t happy to figure out and learn for future use.

I don’t think I’ve ever been as distracted by an answer in a crossword as I was when I was solving this. I’ll get to that in a bit.

THEME: Words that are synonyms for “info” are placed “inside” (i.e. central) in the grid.

First off, I seriously hope that solvers are noticing the high quality change in the Universal puzzle since David has been editing. He is also bringing in some serious talent. Besides the theme, Jeff Chen’s grid is fantastic with fill like ALIEN LIFE, LIP READER, DO PENANCE, and HOT MESSES.

But I had a very hard time (emotionally) with this one for a reason that neither the constructor nor the editor could’ve avoided. It’s the way that I solve. I tackle Acrosses first in the top third of the puzzle, but I skip over theme answers. Then I fill in a few downs.

Because of this, I had CH?M? when I got to the clue for 7D [Real head-scratcher, informally?].

I couldn’t unsee CHEMO. I couldn’t unsee my father constantly touching his scalp as he briefly fought with pancreatic cancer. For me, the answer fit perfectly: the word CHEMO is informal… and, if the time I spent by dad’s bedside in Sloan is any proof, it’s real head-scratcher. I froze. And then I slowly entered the letters E and O, fully knowing that Jeff and David would avoid that entry at all costs and would certainly never clue it as horrifyingly as I read it.

It took me over twenty minutes to figure out the theme after I eventually finished the solve. Perhaps the fact that the revealer clue was quite cumbersome to unpack didn’t help (only one of the answers in its entirety is a synonym for “info”). I don’t know why. Just couldn’t gather my wits.

Good theme with great fill, and a bizarre coincidence that I’m sure was unique to this solver. If a 5 star puzzle is unforgettable, then I’d have to rate it 5 stars. But that’s me. I won’t forget it. That unwieldy revealer clue is sure to addle a few solvers. 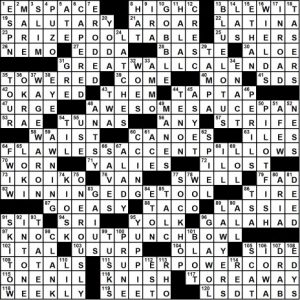 This clever, clue-dependent theme is executed with long horizontal entries, the tone and tenor of which are portended by the title:

Lots of other good ILSAs elsewhere in this grid’s fill. E.g.,

It’s been a long day. This will be a short review.

Each them answer has a preposition added to a base phrase to match the wacky clue.

A solid theme. Some of the answers made me smile and might have made me giggle if I weren’t so tired.

What I didn’t know before I did this puzzle: that PEZ were invented in Austria. I’ve also never before seen BLINTZE spelled with an E on the end.