Veteran constructor Peter A. Collins brings us a quirky re-parsing theme today. He’s found two-word phrases whose first word can be broken up into a different word plus a state abbreviation. Clues are then presented referring to a city in said state. 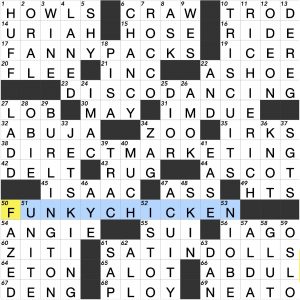 Cute theme even though speaking some of these re-parsed phrases can be stilted at times. In my mind, FUN KY CHICKEN is such a winner that I’m happy to overlook awkwardness in the others.

Very nice fill as you’d expect from a veteran. I especially liked learning about the [Comic book character whose middle name is $] (i.e. RICHIE RICH). BURLINGTON, TRISCUITS, and JET-SKIING round out the top long fill.  Other goodies include CHANCY and ACUITY, and solvers over at the WSJ site always appreciate an ISAAC sighting [Bartender aboard the Pacific Princess]. ABUJA [Nigeria’s capital] is nice and crunchy as well, but I definitely needed most of the crossings.

Clever wordplay in this puzzle. 3.8 stars.

Team Fiend’s own Joon and Andy Kravis provide the sort of snappy theme, excellent cluing, and smooth fill I expect from this pair.

The formula for today’s theme is stock phrase + (ex) = wackiness. 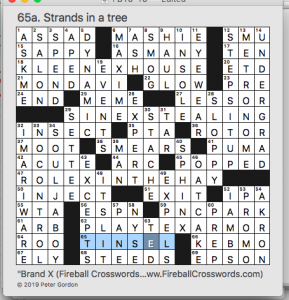 What I didn’t know before I did this puzzle: that President ASSAD of Syria studied ophthalmology in London. 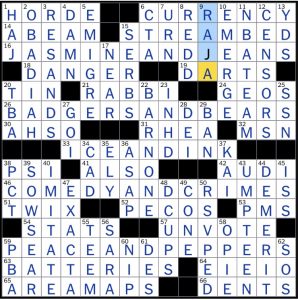 Happy Thursday (eve), all!  Today’s puzzle is from Randolph Ross and I did not understand its theme until a solid five minutes after finishing the grid:

What really helped here was reading the clues out loud – that gave me the “AHA” needed to realize the jays/bees/eyes/seas/peas are phonetic versions of J/B/I/C/P.  Blue can precede each word in JASMINE AND JEANS to make other common items (blue jasmine, blue jeans).  Honey badgers and honey bears, dry ice and dry ink, etc.  This was…unexciting, as far as themes go.  I didn’t have any good footholds on the theme clues (other than that there seemed to be an AND in the middle of each), and the rest of the fill felt…less than inspiring.

Nothing in the choice of fill here helps this puzzle feel like it was written in the last few years – cluing HAJ  in reference to a 1984 Leon Uris novel as opposed to something more general, like a pilgrimage – and this seemed to TEEM with abbrevs. (PSI, PMS, PBA, SOS, CRA, YDS, TBA, SSN, ISS, etc.) and other bits and pieces (GO I, IN HD) that I find frustrating as a solver.

I think this may be a debut for Robert Mark- if so, welcome and congratulations!

This is another example of a workaround to circled letters- hard to figure out what exactly was going on until uncovering HITCH with its clue. Due to this, it played like a themeless for me.

It’s impressive how (relatively) clean the constructors kept the grid given the amount of theme material. The exception being the absurd entry IIII, which even the clue itself pokes fun at in a way [Clock’s four, rarely]. Other fill I struggled with was AVISO, CASEIN, SABAN, and CATALEPSY.

I’m not entirely sure why the title fits the theme (movies aren’t really “hanging”)- or why the Hitchcock movies are “interrupted” at all. Fun in retrospect to find the movies- but not too much else to say about this. 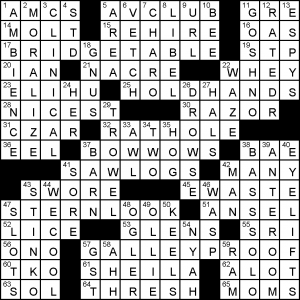 I liked the basic theme idea. The theme phrases start with parts of a ship – BRIDGE, HOLD, BOW, STERN and GALLEY. Mr. Haight also included a second layer – each of the clues repurposes the phrases to be nonsense phrases about said part of the ship. I have never heard of the phrase GALLEYPROOF before, and the definition – “noun Printing. a proof, originally one set from type in a galley, taken before the material has been made up into pages and usually printed as a single column of type with wide margins for marking corrections,” is not helping much… Is this not quite specialised jargon? 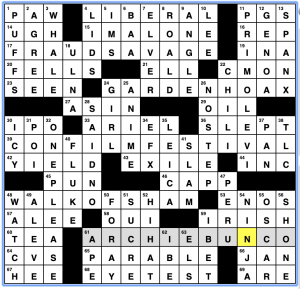 This Thursday’s BEQ is a PUNny one:

TLC, singers of “Waterfalls” as well as “No Scrubs”

The rest of the fill on this was just alright, y’all.  POI isn’t really a finger food (though, if you want to eat taro paste with your hands, be my guest), and it was part of a bunch of fill, like ALEE, IPO, OUI, ENOS, etc. that pops up all the time in crosswords.  Two high points in cluing: calling out the ridiculous lengths of CVS receipts and “Garten of eating” for INA, purely fork doing the work to make that clue sound like Garden of Eden.