Paolo has taken well-known phrases and removed the vowels from one of the words, leaving behind a well-known initialism in its place. Clues are wackified with respect to the initialism. This is one of those “wish I’d thought of that” themes. 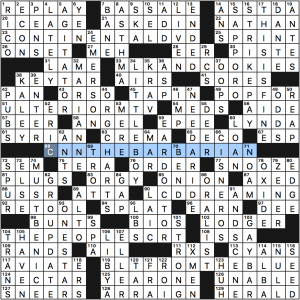 I like the consistency in that all the initialisms are three letters long, and that they are split roughly evenly between the beginnings and ends of the phrases. None of them was particularly lol-funny, but neither were they groan-worthy, and the MLK entry gave me a smile. I wonder if that was the seed for this theme.

The grid is peppered with nice long Down fill. Topping the list in my book is “MUST BE NICE” followed closely by “AND…SCENE.” Other goodies: “THIS IS FINE,” GROUP DATE, LITTLE BOY, ORG CHARTS, EAR DOCTOR, SAPPORO, EMERSON, and “NEED A RIDE?” I didn’t know STRIKE PAY [Compensation from the union], but it was simple enough to infer.

I also didn’t know CISNEROS [“The House on Mango Street” author Sandra], but having the CISN- in place I made an educated guess. MARIANNE on the other hand [French national symbol personifying liberty] is completely out of my wheelhouse and I needed every single cross for that. Wikipedia has a very descriptive history on MARIANNE and how she is the precursor to our own “Lady Liberty” (who of course, was a gift from the French).

POP FOR [Buy, especially as a treat] is also an odd one to me. I think I’m more accustomed to hearing “spring for” rather than this one. Perhaps it’s a regionalism?

Oh, and how about KRAV [___ Maga (self-defense developed by the Israeli army)]? That one is out of left field, but what are you gonna do when it crosses two themers, starts with K, and ends with V? I think I would really try to do some grid re-arrangement, but maybe this really is the best alternative. At least the crossings were all doable.

One more new one (to me) worth mentioning: ORALIST [Lip-reading teacher]. I didn’t know this was a thing, but am glad to learn it.  I figured lip-reading was something you pretty much had to teach yourself. Do most deaf/hard-of-hearing people seek help from an ORALIST?

Favorite clues go to 98a [Hits close to home] for BUNTS and 102a [Flat personality?] for LODGER.

An entertaining grid despite a lot of new-to-me entries and what seemed like a heavy dose of proper names. 4 stars. 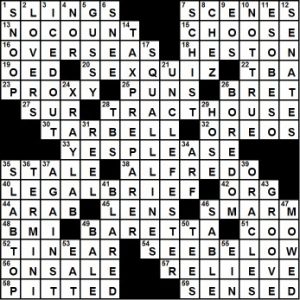 Still subbing for Derek. Do I want a challenge? YES, PLEASE. It is NOT TRUE that I CHOOSE  BOREDOM.

So, I see a grid of 66 answers, only eight of which have eight or more letters. Don’t call me a NO-COUNT guy. Ready? Go!

Okay, then. I’m RELIEVEd to have MOWED through this field in under nine minutes, a good time for me. I had SENSED this might happen.

I don’t have to go OVERSEAS to take a SEX QUIZ, by PROXY or in person, in a TRACT HOUSE with “ESO BESO” playing on an oldies station, or in an X-RAY LAB, while that ARAB UNCLE FESTER hired as a TAX PREPARER, ALFREDO, fills out forms as SQUALL LINES enter the area. Whether the SENATE’S ICED OUT or, in its LEGAL BRIEF, is for or AGAINST OREOS, is for the ORACLES to concern themselves with. I hope no SCENES will occur. 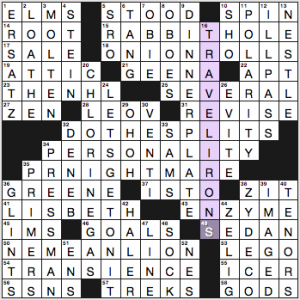 The grid’s got 11 long (10-11 letters) entries, which is nice to see. I like RABBIT HOLE, DO THE SPLITS, and PR NIGHTMARE, but surely could do without the evocation of CHLORINE GAS. The other longs are rather more ordinary.

I’m filling in for Derek just before I go on vacation, and he’ll be filling in for me at some point while I’m gone. I know you all wait eagerly for these updates about Team Fiend.

Today’s Stumper was indeed Les Ruff. I’m not sure I’ve ever done a Stumper in less than ten minutes before. It’s an unusual grid design – I’m no grid design expert, so I can’t say anything about it from the construction standpoint. As a solver, it makes me more aware of moving from one section of the puzzle to another.

The fill doesn’t make the puzzle less Stumpery than usual. The cluing is more straightforward than Stan’s typical fare. I like almost all of it. 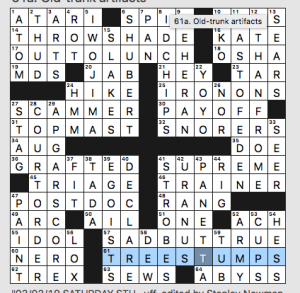 What I didn’t know before I did this puzzle: that ABYSS comes from the Greek for “bottomless.”

THEME: Four basketball stat categories (which are necessary to achieve a “quadruple double”) make up the endings of four theme answers. 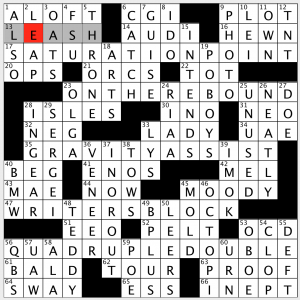 I confess I had no clue what a “quadruple double” entailed before looking it up. According to sportskeeda.com, a quadruple double is “…recorded when a player registers double figures in any four of the five primary stat categories – points, rebounds, assists, steals, and blocks.” It sounds like quite the feat since only four NBA players can add that in their list of accomplishments.

Vaguely recall seeing a “triple double” themed crossword in the past. Ah, yes! Here it is. Here’s another. And another. And one more. All of these are executed entirely differently than Guzzetta’s offering.

Tough fill included RIAA and INO crossing, though we can appreciate the clue for INO [Odysseus’ rescuer (hidden in “Minotaur”)] to help the solver avoid a Natick. I blanked on UAW and the spelling of SERGEI (I wrote SERGIO).