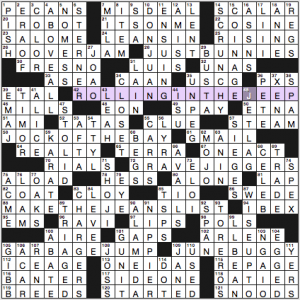 My Sunday NYT debut a decade (!) ago was a collaboration with Tony, also a letter-change theme in which M’s became P’s, prompted by my husband asking if “studpuffins” were a thing. Here, Tony and Andrea change D’s into J’s:

Four stars from me. No, a letter-change theme doesn’t break new creative ground, but when it’s light and fun and none of the themers make you mad, it works. 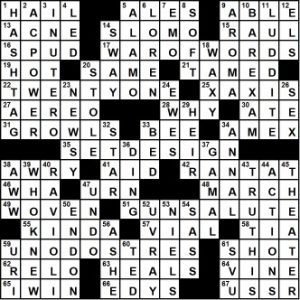 Once again, I need to start writing and hope this theme comes to me as I do. (When I speed-solve, I often miss the theme.) This process begins with my copy-pasting the theme clues and answers, as I consider what might be contemplated by “Card Catalog” (card types, card games, words/phrases with card in them):

17a [*Intense argument (note each starred answer’s first word[s]!)] WAR OF WORDS—So, I need to pay attention to first words. The first one here is War, the name of a card game. The bracketed s seems unneeded.
22a [*With 51-Across, military honor] TWENTY-ONE–Okay, this is one word, albeit hyphenated, … and the name of a card game. Now I know what 51a is going to be, and it could involve a follow-up thought, so I’m listing it next.
51a [See 22-Across] GUN SALUTE–No star. No need to worry about whether Gun is a card game.
35a [*Behind-the-scenes work] SET DESIGN—Set is a card game designed by Marsha Falco in 1974, which has been in wide distribution since the early ’90s–a factoid I learned 90 seconds ago.
59 *Spanish count? UNO DOS TRES–Clever clue, clever answer. I wonder if Uno is a card game–just kidding!

With five horizontal themers, you’d expect the Acrosses to offer very little else, but Howard managed to get SLO-MO, X-AXIS, I WIN, and RANT AT in there, furthering my theory that good cruciverbalists go for those ILSA’s (9 Across-ILSA’s is impressive). In the Down arena, the ILSA’s just run wild (8 more, for a total of 17! In a themed puzzle! Are you kidding me?!).

1d [Tweet symbol] HASHTAG–This word has really come into its own. See also a note in tomorrow’s review.
2d [Certain current] AC POWER–Only two previous appearances, both in Newsday puzzles.
3d [Not yet born] IN UTERO–Also the title of a Nirvana album from about a quarter-century ago.
10d [Test that lets you practice after you pass] BAR EXAM–I love this clue, but I could be biased, since I once passed a bar exam.
39d [“Isn’t that surprising?”] WHO KNEW–I use this phrase a lot in my reviews to show, aptly, that I’ve learned something new. See also a note in tomorrow’s review.
43d [“To be honest …”] TRUTH IS–Only two previous appearances, NYT in 2012, WSJ in 2018. But it’s a really common phrase.
50d [Finish by] END ON–Oh, these phrases with terminal prepositions that get clued by, uh, phrases with terminal prepositions. Why not simply [“Let’s ___ a high note!”]?
52d [Sun hazard] UV RAY–Whatever happened to regular, old suntan lotion?

You had me at the title. Okay… so it had nothing to do with actual show tunes, but still- I wasn’t disappointed. Playful puzzle from start to finish. 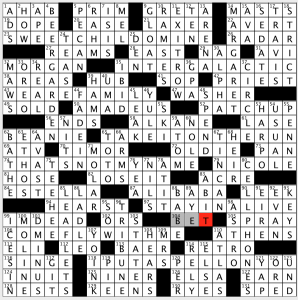 One earworm after another. Not only are the pairings between the TV shows and the songs spot-on throughout the puzzle, but all are solidly iconic. Perhaps THAT’S NOT MY NAME is not as well known, but I had it on my gym workout playlist for a long time… and it’s been in my head since I finished this solve. If you’re not familiar with it, it’s catchy:

Also, it seems like an easy task to pair up TV titles with songs, right? It may be trickier than you think…

Two questions for anyone who wishes to partake: 1) Which of the theme answer songs is your favorite? and 2) What’s another apt pairing not listed in the grid? (no need for either the TV show or the song to be iconic).

P.S. I vaguely remember a video game clue, but can’t find it now. 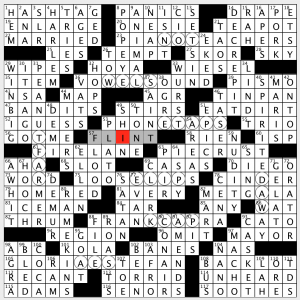 Took me a second to get going- was shocked to see circles appearing in the Universal puzzle. I solve in AcrossLite, but I’m hoping that it appears the same way universally (mediocre pun intended). Otherwise, I can imagine a lot of confusion. Fingers crossed… but I hope that Universal is now embracing the power of the circled squares.

THEME: Synonyms for “Lot” (as in a quantity) appear backwards in theme answers.

One of my favorite constructors, though I’m sure a lot of constant solvers sigh with relief when Burnikel is the surname in the byline. Essentially, you’re guaranteed a consistent, understandable solve experience with solid fill. In that respect, it doesn’t disappoint.

I saw early on that the circled letters read another word in reverse, but still didn’t grok the connection until the revealer. Good “Aha!” moment uncovering BACKLOT, but I guess I just don’t find the word “lot” or its synonyms all that exciting.

With so many theme answers (all solid and fun to uncover regardless of the theme), the fill is still impressively clean with longer answers such as PIE CRUST, EAT DIRT, FIRE LANE, MET GALA, IT’S A GO, and WIN BIG adding to the overall quality.

Anyone else enter SHADE for DRAPE, then DUCK for PORK as a result and have a momentary mess in the NE?

RAMEKINS clued as [Small baking dishes] took me a while too- As a person who started working in restaurants at thirteen years old and hasn’t completely left yet, I’ve only known them as “quaint sauce holders.”

I’m posting from Newark Airport, where we are awaiting a flight to Iceland. I may have had a glass of a very nice Chilean sauvignon blanc with dinner, which may account for forgetting to turn on the timer and for not being entirely sure I’ve grokked the theme.

I think that each theme answer contains the abbreviation AD. Well,  I know that’s true. I think that’s the whole deal with the theme, and it seems pretty thin. If I missed something, I trust you will let me know in the comments. 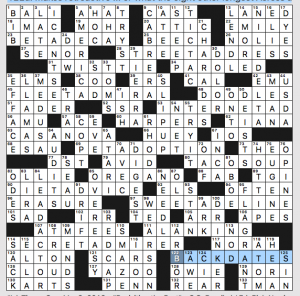 and a revealer at 122a [Makes retroactive … or what the eight other longest Across answers have]: BACK DATES. This is what confuses me. We’re still in the AD era (well, I’d prefer we refer to it as CE, or the common era, which is non-sectarian, but that’s a separate argument) so why do themers have BACK DATES? The letters AD aren’t universally in the back of the clues. I really do think I missed something.

What I didn’t know before I did this puzzle: that TED Danson appears in the TV version of “Fargo.”