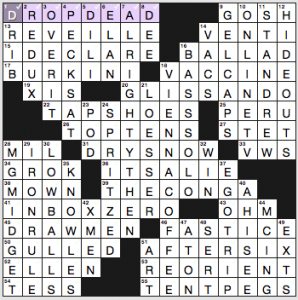 This 62-word pinwheel somehow found wiggle room for lots of lively fill. We’ve got the conversational “DROP DEAD!”, “I DECLARE!”, “IT’S A LIE!”, and “ALRIGHTY, THEN!“, plus the much lesser entry “AH, I SEE.” Oh, and the little “GOSH!” This is a particularly exclamatory puzzle.

Top fill in the non-conversational vein: pretty GLISSANDO, THE CONGA (wonder why THE CONGO/OH I SEE wasn’t chosen here), INBOX ZERO (why bother?), an old-school MG MIDGET (my uncle drove a green one in the mid-’70s), LOWBALLS, SPRITZED (slowed myself waaay down in the middle by trying ATOMIZED when the Z was in place), MCING, and GELCAPS.

Did not know these three things: 18d. [Drink with espresso and whipped cream], VIENNA COFFEE. Not a coffee person. Just give me the whipped cream and back away. 45a. [Some workers who stretch plastic materials], DRAWMEN. Ugh, unless you’re using a penis to stretch the plastic, there’s no reason to have MEN in the job name. A better choice: Exploring the Instagram hashtag #drawmen. 46a. [Freeze that extends out from a coastline], FAST ICE. Meaning it holds fast to the shoreline. And yes, apparently it’s a lake thing, too. This February 1 article from Duluth tells you the ramifications of more fast ice.

Like Thursday’s “The Birds and the Bees,” this one is similarly unusual and clever.

I caught on pretty early when I spotted SHAD in SHADOWED and TUNA in FORTUNATE. Obviously the entries had fish in them. But that’s only half the story. I couldn’t find any fish in some of the entries no matter how hard I looked.

All gets revealed at 68a [Line to the indecisive, and what you’ll need to add in order to complete some lines in this puzzle] FISH OR CUT BAIT. First off, I love this fun phrase as a revealer. The theme entries either have an “uncut” fish or else an item that might be used as bait, except that it’s been sliced up within the entry? Got that? Check it out. 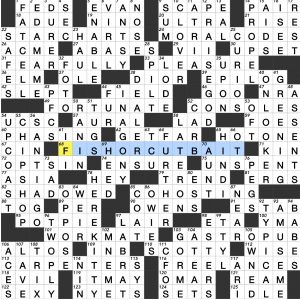 I found this theme challenging (trying to make sense of some of those baits was a good wordplay workout), but inventive and a whole lot of fun. Sometimes one wonders if we’ve seen all the themes that there are to see since so many puzzles are just variations on a…well…on a theme. But then you find grids like this one and Thursday’s and you see that creative people seem to be able to make a pleasurable coherent theme out of almost anything. What a treat for us as solvers!

Fill-wise, I’m loving “HERE, KITTY” with the clever clue [Stray line?]. Reminds me of my 1-year-old daughter trying to feed a rock to cat.

We found a kitty while taking a walk in the neighborhood.

I’m also liking the British CHIP SHOP, ecstatic “PRAISE GOD!”, frustrated “TYPICAL!”, and bored “AMUSE ME.” A lot of emotion in this grid! 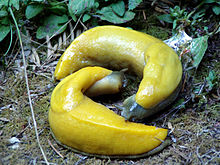 And that’s all for today. A clever and impressive theme, solid construction, and lots of fun fill. 4.25 stars from me. 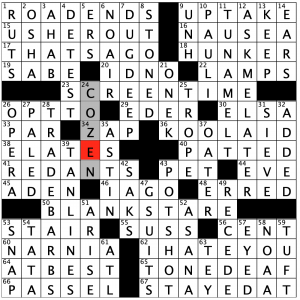 This one played tough for me. I must still be in my post-vacation funk! With my new accounting career, I am not used to coming back to work and seeing what has piled up while you are gone; at UPS, someone does all of your work while you are gone! This 72-word grid allows for great fill in a themeless, but the prolific C.C. always has fun grids to fill in, so this is not a surprise. A solid 4.5 stars today. 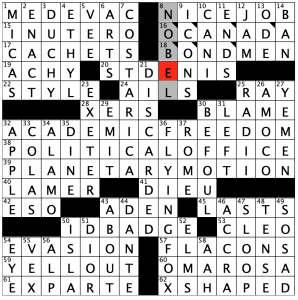 A sub-15 minute time on a Longo Stumper! I’ll take that any day!! I don’t track these things that closely, but usually a Longo bylines means a Longo-ish time of well over twenty minutes. Somehow I found the LAT puzzle a lot harder than normal this week, while this one didn’t seem too thorny. I wonder how I can duplicate what must have been ideal solving conditions? Especially in two weeks for the ACPT! Hope to see you all there. 4.4 stars for this week’s Stumper.

A few high points, including the three 15s in the middle:

What Jim Holland is up to here is creating the area for which Las Vegas is known. One letter at a time, as editorially explained in lieu of using circles or shaded blocks: 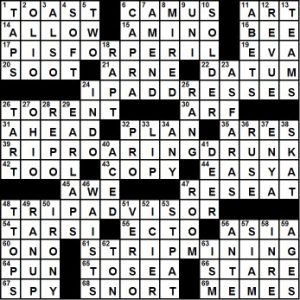 Was it worth the gamble? (Groan!) Pretty clever, I’d say. Not overly complicated.

Not much else to write home about, but that’s to be expected with an 11-11-15-11-11 theme that’s all horizontal. Nothing longer than seven letters outside the theme and only two of those.

AS FAR AS (23d) is a clunky ILSA, as is EARLAPS (29d), which I never hear or read other than in crosswords. The latter being a literally-self-explanatory synonym of earflaps, I’ve often wondered if earlaps might not have started as a typo of earflaps. It also occurs to me that earflaps must have gotten its start in the language as two words that just got pressed into service together to describe something that a seamster or seamstress came up with to, uh, keep one’s ears warm, or not, wearer’s option,  don’t you think?

No real junky stuff elsewhere, though, so let’s celebrate that with a solid 3.5 stars.

P.S.–If I could type worth a flip, I’d have broken six minutes on this one. I’m blaming cold fingers.