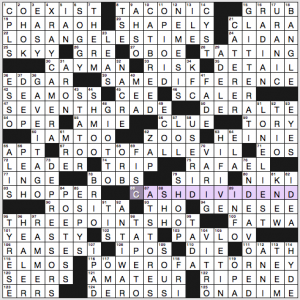 The theme is a little tricky to explain. The phrases that are theme answers are interpreted as if mathematical expressions can represent them:

So SAME DIFFERENCE and ROOT OF ALL EVIL are outliers here, since their clues include actual mathematical expressions, unlike the other five themers. Eh. Not for me.

The fill felt a bit on the musty side, no? GLITTERATI sparkles, but DER ALTE, ESSO, plural ELMOS, OPA, and the woeful 117d. [Old-fashioned cry of despair], “O ME” (among others) brought me down. 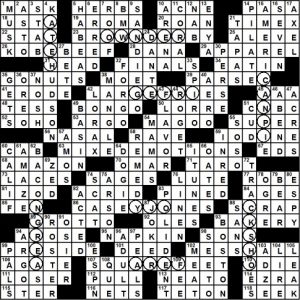 Here we have an anagrammatical “Internal Conflict” that, from what I can glean, is very cleverly laid out. The circled letters, unscrambled, are–well, see the reveal at 63a. What’s amazing to me is that Robert has assembled eight long answers–all two-unit ILSA’s (actually, all two-word phrases) with anagrams of words that we use to label human emotions spanning the two units.

Well done, Constructor Morris … and Editor Steinberg, who uses no work-arounds on this puzzle. Perhaps we shall see more circles, rather than special instructions in with the clues?

Other floats in this parade include:

Quick writeup today since A. the matinee I have tickets for begins at 2 p.m., not 3 (as I originally thought) B. the absurd Daylight Savings Time thing (read WaPo’s take on it here) certainly isn’t helping and C. the roads are an icy mess.

For this oddly sized meta-puzzle, Evan asks the solver to determine a 7-letter word that is the puzzle’s code.

THEME: Morse Code. The words “DOT” and “DASH” are hidden among seven different rows of the puzzle. 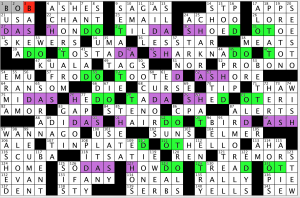 The meta is fairly straightforward after finding each of the DASHes and DOTs. Each row represents a letter in Morse Code, and once you have determined what each letter is, you’ll have CRACKED it. And indeed, the meta answer is CRACKED.

To Evan’s credit, I hadn’t noticed the repeating letter strings until the very end. In fact, ASH [“Pokemon” protagonist] was the last answer I filled in- and I thought “Well that’s funny… ASHES [Evidence of a blaze] is already in the puzzle…” Interestingly enough, ASHES at 4-Across is not part of the theme at all. Must’ve driven Evan crazy being forced to use that word.

The title certainly nudged me toward a quick AHA since any form of the word “Break” in a revealer or title often suggests that a black square will break up a theme entry.

With constrictions like that, this is impressively filled. ARMOR ALL, SHORT ARM, TIN PLATED, SET A DATE, SHARKNADO, I’LL TELL, HAN SOLO, IT’S A TIE, and PRO BONO make the short list for me.

Most of the fill/clues are straightforward.

Also, I could not get this scene from A Christmas Story out of my head while inputting the code into an online translator:

Jim P here sitting in for Jim Q. All the Qs in this review have been changed to Ps.

There’s a great big hint to the theme in the form of a giant H in the middle of the grid. Beyond that, each of the theme answers in a pinwheel pattern starts with one of the Hs that are the basis for the 4-H Club. 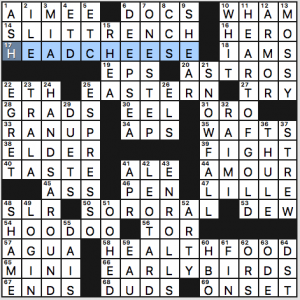 Straightforward enough, eh? The pinwheel pattern almost recalls the clover logo of the 4-H Club. It would have been cool if the entries were in a clover pattern, but that would be a much harder puzzle.

HANDS AROUND feels less standalone than the others, but I suppose it passes muster. “Hands down” would sound stronger to me, but it’s two letters shorter. And keep your HEAD CHEESE. I refuse to eat any meat that’s got that kind of a name. Okay, I broke down and looked it up; the description is even worse.

Frankly though, I didn’t know what the Hs stood for in 4-H Club, but it all makes sense. I was never in, nor were any of my kids in the club, though we considered it, especially when we lived in agriculturally-minded locales over the years. If you have any experience with the club, please share in the comments.

Top non-theme fill: SLIT TRENCH (which I never heard of; I’ve always just heard “trench”), EARLY BIRDS, ESPRESSO, DEEP-SEA, LEOTARD, and SNOWFALL (though I’m sure many on here would rather not see this in their grid). That’s a lot of strong fill. There’s not too much gunk, but those NW and SE corners are not pretty with their strings of 3-letter entries. Thankfully, those get worked out pretty quickly.

Late! So late! So here’s the grid with the correction signs because I had a typo and no time to hunt for it. 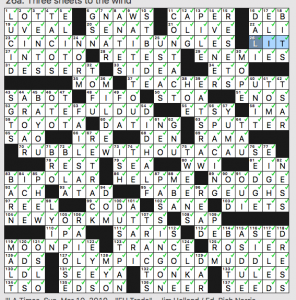