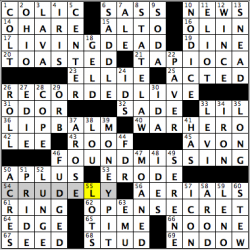 Hello there, everyone! Hope all is well with you, and hope daylight saving did not cause too much chaos to you and your day yesterday!

Today’s puzzle, brought to us by Mr. Trent H. Evans, is full of commonly-used phrases that also happen to be oxymoronic in nature, with the four theme entries all being two-word phrases in which the two words in the phrase happen to contradict each other. I think what makes this grid even more enjoyable is that, for at least a couple of the entries, I never had in mind the contradictory nature of the phrases during all of the times that I had uttered them in my life until doing this grid and seeing them all in one place.

Was a very smooth solve, though, for some reason, I initially put in “sedate” instead of SERENE in my haste (49D: [Tranquil]). For those who are into horses or equine-related activities and things, there’s both COLT (1D: [Indianapolis footballer]) and GELD (18D: [Neuter, as a male horse]) in the grid, and then there’s SADDLE just for good measure (6D: [Equestrian’s seat]). Oh, and just noticed another horse-related entry, STUD, even though it’s referenced as the card game that I would probably be terrible at if I was sitting at a poker table anytime soon (68A: [Variety of poker]). Loved the paralleling, chunky entries of both STATE LAW (8D: [Measure after the governor’s signature]) and MONEY PIT (39D: [Interminably expensive project]). Oh, and what actually makes this grid really awesome? The inclusion of one of the great voices in music (and a woman of Nigerian heritage, mind you) in SADE (32A: [One-named Grammy winner for “Soldier of Love”]).

“Sports will make you smarter” moment of the day: SEED (67A: [No. 1 ____ (tournament favorite)]) –  Going into last year’s NCAA Tournament a.k.a. March Madness, teams that have had the distinction of being the No. 1 seed in a region since the tournament expanded to 64 teams in 1985 had been a perfect 132-0 in first-round games. That number creeped up to 135-0 during last year’s tournament, but on the night of Friday, March 16, 2018, the impossible indeed became a reality; The No. 1 seed in the South Region, the University of Virginia, was stunned, defeated by No. 16 seed UMBC (University of Maryland Baltimore County) as the Retrievers became the first No. 16 seed to ever win a first-round game and defeat a No. 1 seed in the Big Dance. Will we have to wait another 33 years for a another No. 1 seed to lose in the first round of the NCAA Tournament?!

Thank you so much for the time you spent on here to start your week!! Have a wonderful rest of your Monday!

Can a puzzle’s water break? Because this puzzle has four broken waters! 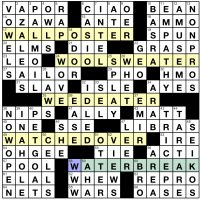 A pretty straightforward take on the ‘split a word across the ends of each themer’ type of puzzle, but I enjoyed it. WALL POSTER, for example, splits the word water at either end of the theme entry: WA LLPOS TER. I appreciated that the word was split differently across most of the themers and understand why it would have been impossible to split it as WATE_R.

Overall, the fill was also largely straightforward. I had a bit of trouble with Seiji OZAWA and BASRA, but I was glad to learn of them. Otherwise, my only other thought was how bummed I was that the only woman represented in the cluing/fill (aside from the constructor herself, obviously) is a ship (SHE). Hopefully in the next grid!

Today I did everything but the kitchen sink. No wait, that’s not right. Today I only did the kitchen sink. That’s it. I spent nine hours removing and replacing my kitchen sink and grumbling about the Lowe’s employee who said it would be easy, so I’m pretty tired. Plus, this puzzle posted late, so I really want to call it a night. I will make this brief.

Our theme today is two-word phrases whose second word is re-interpreted as a work of art. 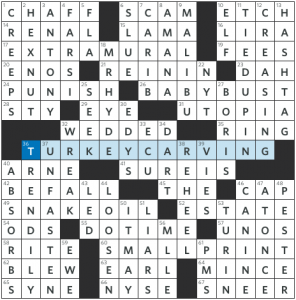 Only two of the phrases were instantly recognizable to me, so I was puzzled by the theme for a while. If you’re more familiar with those other phrases, I suppose it works fine, but I was left wondering what a BABY BUST was.

Unfortunately, the long fill is decidedly ho-hum with TIED UP IN, CREASING, TRENDILY, UNFASTEN, and ABSORBS. HASHTAG is nice, as is MALIBU, MR. HYDE, UTOPIA, and “SURE IS!”

Mostly this didn’t do much for me. The theme entries felt uneven and the fill did not elevate it. 2.9 stars. 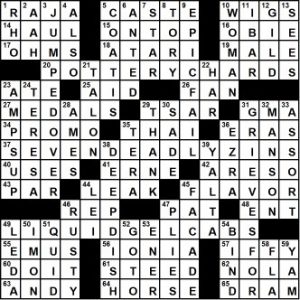 My friend Mike is having fun with, by punning upon, spirits in today’s crossword: 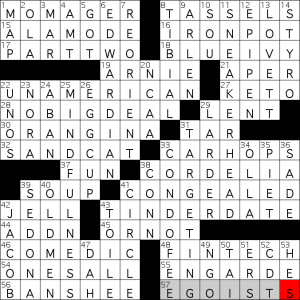 welcome back! one of the things the article mentions about anna’s puzzles is that they feature “sharp-tongued feminism, politics, and hat-tips to the cultural zeitgeist of the day”. in general, i’ve found that to be an accurate characterization of her puzzles, and i admire them very much. on the other hand, whenever i start solving one of anna’s puzzles downs-only, i have a larger-than-usual fear that i just won’t be able to finish. that possibility seemed very high with today’s puzzle, but ultimately i worked everything out, and there were only a few totally unfamiliar entries. one of them, of course, was the seed entry at 1-across, {Neologism popularized by Kris Jenner} MOMAGER. i didn’t have the clue, of course, but it wouldn’t have been very helpful to me anyway. nevertheless, i managed to piece it together, since 1-, 2-, 3-, and 5-down were basically gimmes. i got EDWARDIAN and REORIENT much later, after a breakthrough in the middle-left section, and then the last part of the grid i managed was the upper/middle-right, after guessing SNEAKER____ for {Footwear enthusiast} and finding it worked pretty well.

things i liked and didn’t like this week (h/t zach lowe):

Everything seemed like it was falling in place so well today! I thought for sure I’d get myself out of the jam in the NW. Nope. 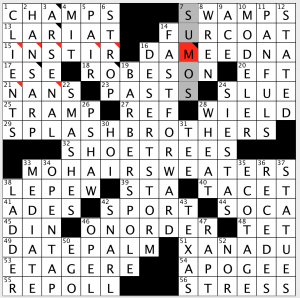 Not my most successful solve, but still enjoyed it, and enjoyed the AHAs as I shamefully threw in the towel.