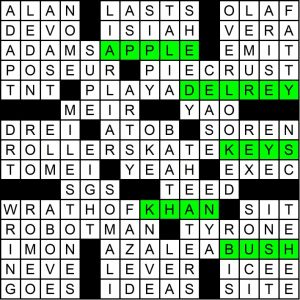 Title: “Feminine Endings”
Prompt: The meta for this puzzle is a famous singer.
Answer: Roberta Flack

Another of the early, gentler months of the Muller Meta is upon us. I didn’t ponder too much on 17a. [Body part called a “goozle” in the South], ADAMS APPLE when it first came up but when the next one was 24.a [Los Angeles community whose name translates to “King’s Beach”], PLAYA DEL REY, I looked back up and noticed Fiona APPLE and Lana DEL REY. Using the first letters of their first names we have FL??? for presumably the surname of a famous singer. Figured if the next one was an A it was probably Robert FLACK. Sure enough, next up was 38.a [Small wrenches used to adjust some retro footwear (one was the subject of a Melanie song)], ROLLERSKATE KEYS, so Alicia Keys and we indeed have FLA??.

Wasn’t sure enough to submit without checking so the last two are:

48.a [Subtitle of “Star Trek II,” with “The”], WRATH OF KHAN. Not to be confused with this, perhaps the best-titled crossword book of all time (referencing that it contains extremely difficult puzzles). Chaka Khan, so FLAC? and then

60.a [Deciduous plant in the heath family], AZALEA BUSH. Kate Bush, so Roberta it is.

14.a [Band name inspired by the concept that mankind has started to regress], DEVO. I did not know that.

56.a [DC Comics character with the simplest possible name you could imagine giving a cyborg superhero], ROBOT MAN. “OK, if we can’t come up with anything better we’re going with ‘Robotman’.”

So an easy and fun one, as March should be. I’m 3-for-3 and you might well be, too. We’ll reconvene here in four week and compare notes on April. Until then.