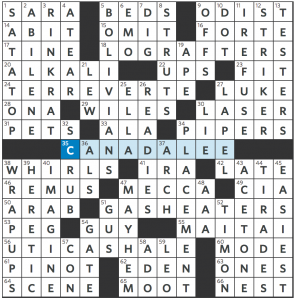 This week we’re looking for “a five-letter synonym for ‘fight’.” Let’s see what the themers serve up for us:

Each theme entry, it turns out, hides the name of a famous tennis player:

Those don’t appear to add up to anything in particular, but what about listing the first names of those folks? 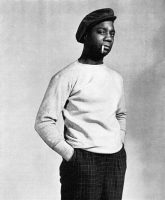 We get SCRAP, which is a five-letter synonym of “fight.” Only a few things kept this puzzle from being, for me, a perfect example of an entry-level meta (say, 1.25 metaweeks on the Gaffney Scale): TERRE VERTE and UTICA SHALE are a little obscure, unless you paint or dabble in geology; LOG RAFTERS and GAS HEATERS are a bit green-painty. (Also, I hadn’t really heard of Pat Cash and had to look him up.) CANADA LEE is someone you might know of if you watch a lot of TCM or are familiar with African American theater history — he played a lot of Shakespeare and was a civil rights activist. He was blacklisted in 1950s and found few roles after he refused to denounce Paul Robeson.

I remember most mid-1980s Starship, including [1a: Starship song that hit #1 in early 1986]: SARA, as some of the worst rock music that ever existed, and all these years later, the video does not disappoint. Come for the nonsensical Dust Bowl framing narrative; stay for the mullets.