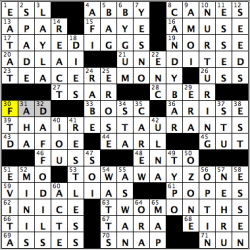 Good day, people! Hope all is well with you as, at least on the East Coast, it looks like spring actually wants to poke its head out and wants to play! Dare I say that we’ve turned the corner and have seen winter pass by for good? (If you’re out in the Midwest and are preparing for more snow in the next day or two, please disregard the last sentence.)

We have some fun with vowel sounds in today’s puzzle as the five phrases that make up the five theme entries all start with a word that begins with the letter “T” and, from the top theme entry to the bottom, combine to carry the five long vowel sounds in those words.

Definitely hoping I make it through this blog without making a TYPO, which is something that I’ve sadly been guilty of on here a few times (49D: [Goof in a proof]). Definitely caught myself saying BY GUM after filling it in, which means that’s the first time I’ve ever said that out loud in my life (6D: [“Dang!”]). Don’t hear that phrase at all, though I’ve people say “dadgum” a number of times. Totally going to break with tradition and highlight two clues and give it a sports spin, as I definitely want to mention FTD and that, for many years, the commercial spokesman for the company was College and Pro Football Hall of Fame defensive lineman Merlin Olsen — or, for some of you, Jonathan Garvey from Little House on the Prairie (30D: [Bouquet-delivering co.]). Here’s a little bit of Merlin’s acting/spokesman skills, a few years after he stopped being one-fourth of the Los Angeles Rams’ “Fearsome Foursome” defensive line of the 1960s and 1970s.

“Sports will make you smarter” moment of the day: CANES (8A: [Walking sticks]) –  Last week, the Carolina Hurricanes hockey team, or ‘CANES for short, wore sweaters (jerseys) in homage to their ancestry, donning the green Hartford Whalers jerseys during a game against the Boston Bruins in Boston on Mar. 5. The ‘Canes began as the New England Whalers in 1971, while located in Boston, as a member of the World Hockey Association before moving to Hartford in 1974. The franchise then became a member of the National Hockey League in 1979 after the NHL-WHA merger. Oh, and during their time in Hartford, the team had a very catchy theme song that has now become stuff of legend because of their absence from Hartford. Enjoy the Brass Bonanza! 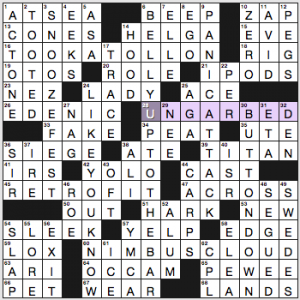 The theme revealer is 30d. [Very conventional … or a hint to the starts of the answers to the four starred clues], BUTTON-DOWN, and the other four themers, all running in the Down direction, begin with words that can precede BUTTON:

I’m not a fan of 11-letter non-theme answers running Across. TOOK A TOLL ON and NIMBUS CLOUD are in standard theme-entry spots. Why not loosen up the leash on the fill by plunking black squares in the centers of those 11s? You lose a little grid connectivity, but there is so much not-good fill here, especially given that newbies may find themselves tackling a Tuesday puzzle and being deterred by answers like OTOS NEZ UTE OCCAM PEWEE OFT AGA ISR, plus plural EEKS.

2.25 stars from me. Perhaps if the theme had jettisoned one of its entries and the grid had been designed differently, the fill would have supported the theme rather than detracting from it so aggressively. (I was literally cringing throughout too much of the solve because of that fill.)

With a title like “Bruisers” … should I be scared? Let’s step in the ring and see what this puzzle has in store for us: 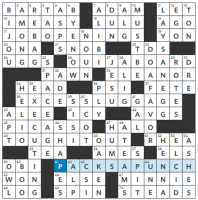 17A: JOB OPENINGS [Indeed.com listings]
26A: OUIJA BOARD [Source of messages from beyond]
38A: EXCESS LUGGAGE [Cause for an additional airline fee, maybe]
49A: TOUGH IT OUT [Endure hardship without giving up]
61A: PACKS A PUNCH [Has a powerful effect, or what each of 17-, 26-, 38- and 49-Across does, literally]

Each of the themers hides in its belly a synonym for punch: bop, jab, slug, and hit. Nice! I liked that some of the themers were colorful (TOUGH IT OUT) or fun to spell (OUIJA BOARD), but wasn’t too keen on EXCESS LUGGAGE, which felt not quite in-the-language. It was odd that such long themers were used to hide such small words, but I was glad to see that each word spanned two words in each themer.

Fill that I enjoyed: GAL Gadot, MINNIE Mouse, and BIJOU.

Fill that made me scratch my head: the LULU/DUN crossing (?), ELEANOR (which apparently references a 1976 miniseries?! – you’re telling me there’s not a more modern ELEANOR to reference?), JESU, ROTES, and BOO as a reference to raspberries(?).

Also, I feel like the NE corner could have been made better as LEI AGO YOU (to give IOU, which could have referenced the new YOU at 19A, and to get rid of ye olde YON). That’s all from me. BYE NOW! 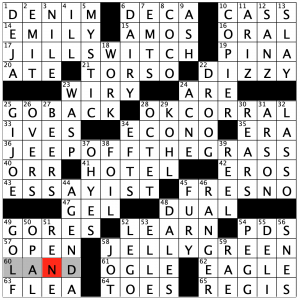 Only three themers, but all are excellent, and the punny clues don’t hurt either!

So, yes, common phrases that normally start with a K now start with a J, and hilarity ensues! Not too much obscurity this week, either, and that’s OK. I am tired, and I really should be training for next week! A solid 4.3 for this week’s Jonesin’.

Everybody enjoy your day! 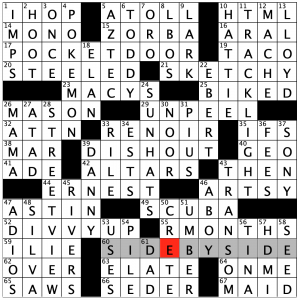 A pleasant Tuesday puzzle that I went through quickly. Which is fine, since the ACPT is coming up quick! The revealer is at 60-Across:

Yes, we are all familiar with side pocket, side door, sidetrack, etc. Nice and relaxing. perhaps almost Monday easy? 4.2 stars.

Have a happy Tuesday!

Simple wordplay puzzle from veteran Jeffrey Wechsler. I’m a sucker for this type of theme.

THEME: Common phrases that contain a 4-letter word (with “OO” in the middle) are spelled backwards, creating a wacky result. 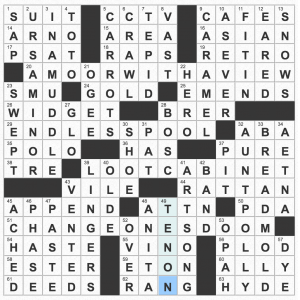 The first three landed solidly for me. CHANGE ONE’S MOOD doesn’t feel like an in-language phrase, but perhaps that’s because of the nondescript pronoun ONE’S in the middle. I do like the consistency with the theme, especially refining it to manipulating words that share OO in their middle. I suppose that’s why the title is “Switcheroo,” hinting that words with OO are “switched” in a sense- assuming backwards means switched.

IN A MUDDLE is a new phrase for me. No real complaints about fill though. OPAH, OGEE,  and ARNO stand out as crosswordy, but otherwise smooth overall.