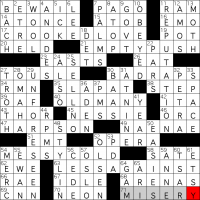 hello and welcome to episode #562 of matt gaffney’s weekly crossword contest, “Third Word Heard”. this week, matt challenges us to name an 11-letter word starting with B. that kind of instruction usually indicates that the answer won’t be directly extracted from the theme, but is instead something you need to infer. okay, so what is the theme?

right, so… what is the theme? it took me a long time to figure it out. they’re all two-word phrases, but it wasn’t until i came back to the puzzle for a fourth time over the course of several days that i got it. the title certainly suggested something involving rhyming and/or homophones, but that wasn’t very helpful here.

no, the first step was something not suggested by the answers themselves, or by the title. you just had to take antonyms of each of the words in the theme answers:

okay, so we found our rhymes. but then what? nothing about this gives us an 11-letter B word, or any kind of B word. the next aha is where the title comes in—you need to find a third word that rhymes with each pair, and those are scattered throughout the fill:

taken in order, the first letters of those third words spell out SWEET. combining this with the antonym part of our meta mechanism gives us the 11-letter B-word BITTERSWEET, which is the meta answer.

this was a very nice meta. for the second month in a row, i thought it was quite difficult for a week 2, although there are a healthy number of solvers on the leaderboard. the crucial first aha is just totally unclued. if the title had hinted at antonyms instead of rhyming, then it would have felt more like a week 2 to me; if you start with antonyms, the rhymes will be obvious, and you can proceed from there to have the second aha and look for the third rhymes in the grid. so the whole thing felt week 3ish/4ish to me. then again, matt has lowered the requirements for a march monthly prize to only 3 out of 5, so maybe he decided to bump up the difficulty to compensate? eh, probably not.

with five longish and five short theme answers in the grid, the fill is a little strained in places. there’s nothing super-clunky, but a larger than usual amount of bleh answers like EASTS and SELL NO. how do you feel about {Simple crossword puzzles, casually} EASIES? i don’t think i have used easy as a noun. i probably just call them mondays.

well, that’s all for me. how’d you find this one?