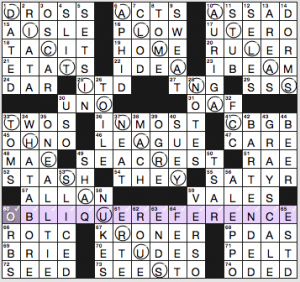 OBLIQUE REFERENCE is the name of the game, clued as 60a. [Indirect comment … or a hint to this puzzle’s circled letters]. The circled words are different sorts of reference books: DICTIONARY, ALMANAC, ATLAS, THESAURUS. What?? Not a single editorial style guide? What a terrible sin of omission. When it comes to actual reference books, and not online versions thereof, it’s the Chicago Manual of Style that I’m leafing through the most.

Aside from that one 16-letter Across answer, the rest of the theme is in the diagonals, so at least the fill isn’t utterly destroyed by having lots of theme answers intersecting in different ways. I mean, starting with DROSS at 1a crossing crosswordese RIATA was a bit rough, but overall, not horribly out of step with Wednesday-caliber fill. (Could’ve done without neighboring ERTE and ROUE, mind you. Or ESTD crossing PDAS and ODED, and not even in a corner with circled squares!)

Cute theme concept, not well supported by the rest of the fill. 3.4 stars from me.

The revealer is at 53d: PEN IN [Enclose, as livestock, and an explanation of this puzzle’s theme]. Theme entries have the trigram PEN added to them. 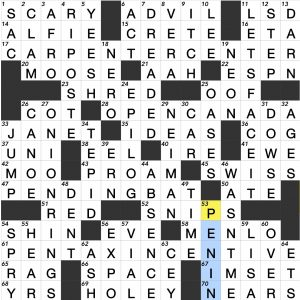 I have to say PEN IN is a rather lackluster conceit for a theme. And none of the theme entries felt like it was worth it. TEPID seems like the word of the day. I won’t go as far as YEESH or OOF, but I found the theme unexciting.

In the fill though you’ll find some crispy ONION RINGS [Circular side dish], and I love the posh-sound RIPOSTE [Witty comeback]. And of course Zhouqin always finds room for some fun conversational entries like “LET’S FACE IT!” [“Look at the facts!”] and the flatulence-implied “WASN’T ME!” [“Must have been someone else!”]. That alone was good for a chuckle.

Fave clues: [Notable fruit sampler] for EVE and [Character from a bar?] for SPACE. Cheeky misdirection in both cases.

Three stars for the theme and add a quarter for the fill for 3.25 stars. 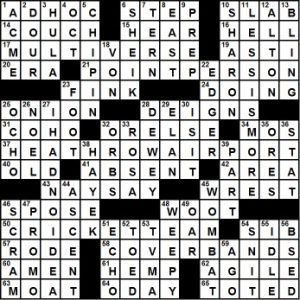 I was contacted not long ago by the editor in charge of crosswords at my local paper. She’d received a complaint from a group of solvers regarding the Feb. 28 puzzle. In that puzzle, one-word film titles spanned two answers. Not being able to use circles or shaded squares, the editor used parenthetical numbers in pairs of clues, creating a “workaround.” E.g.,

See Jim Q’s review of this a couple weeks ago. He did not say so, but it’s just not the same without circles or shaded blocks, is it? That’s my beef.

The beef of the solvers who called the editor, who called me, was that they couldn’t figure out the parenthetical numbers or the theme. Plus, they didn’t know what bubble tea was and didn’t like something about the clue/answer [Twitter spammer] BOT, but I told them those latter two were on them!

Today’s puzzle is similar to that one and to a couple others that have run of late. As a workaround, the solver is told to look for bookends (though today that word is used as a verb). Rather than being presented, say, with a grid containing a few circles, we have instead the following (I’m listing the reveal first, because I think it helps to illustrate the POINT, PERSON):

So, yup! I’m predicting more calls to my friend at the newspaper. I think I’ll get out in front of this one and call her first.

Let’s not fail to mention that, with a theme that runs 10-11-15-11-10 (that’s really too much, guys!), it was somewhat remarkable to see the following other answers in this puzzle: AD HOC, OR ELSE, NAYSAY, CHIP IN, LESS IS MORE, I HAD NO IDEA.

As a friend of mine used to say on the golf course, usually regarding one of his own shots, “It’s not horrible.” But …, this one did not resonate with me on an objective or subjective level. Plus, it was hard! People who seek out this venue expect Tuesday-level easy.

Erin Rhode’s AVCX, “Not Feeling Up To It” — Ben’s Review 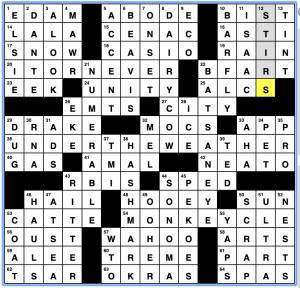 This is a trickier theme, so let’s talk about the revealer first, then dig into what’s going on.  We’re told at 36A that UNDER THE WEATHER (“Sick, or where to enter the rest of the entries with starred clues”) points out how to insert the starred entries into the grid.  There’s also a bunch of unclued spaces at 20A, 22A, 53A, and 54A, which I’ve included below as well since they tie in with everything:

Playing off of UNDER THE WEATHER, the full answer for each clue at 17A, 19A, 46A, and 50A is solved with a phrase: IT’S NOW OR NEVER, BRAIN FART, CHAI LATTE, and MONKEY’S UNCLE.  The non-weather portion of each answer goes where indicated, and everything else goes underneath.

Something about the construction on this rubbed me the wrong way.  I figured out what was going on easily enough, but there’s still something unsatisfying about having four answers that aren’t really words and don’t give you a ton to go on if you haven’t figured out that AHA in the grid.  This certainly isn’t the first time I’ve seen a grid do this (and it definitely feels like the reason for the high difficulty rating), but for whatever reason, it felt less elegant in this specific puzzle.

Part of it may have also been some of the other fill being all over the place: BIST, ALCS, EMTS, MOCS, RBIS, etc. all felt a little junk-y, and I’m not too fond of OOHER, either (“Person during a fireworks show, perhaps”).  I think I would have forgiven the theme more here if the rest of the puzzle shined a bit more. 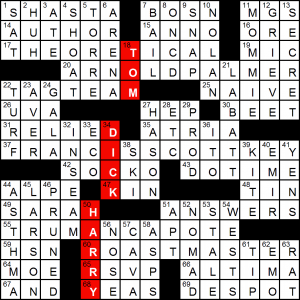 We have slightly offbeat (and more convoluted than usual) theme today. TOM, DICK and HARRY are each connected to a surname of a famous example of each. They are all clued plainly as [Generic guy]. However, the surname is used as a first name of another celebrity in an intersecting across answer. So: TOM(ARNOLD)PALMER, DICK(FRANCIS)SCOTTKEY, and HARRY(TRUMAN)CAPOTE. The last must have been the seed surely. Such an odd first name! In other news, quite the sausagefest.

The theme, despite the extra downs, didn’t feel overly busy. We got TAGTEAM, DOTIME, and ROASTMASTER all of which help to enliven the grid.

AUTHOR and the second [Bridge position], NOSE are two playful clues. It’s nice to see some tricks in the earlier part of the week.

One thing is bugging me though. [Family nickname], MOMMIE. That spelling looks plain bizarre…