Either I’m getting better at Peter’s themeless puzzles, or this one wasn’t as difficult. There are a fair number of straightforward factual clues that I happen to know, which helps. I was also on Peter’s wavelength for some of the misdirection. I guess you do enough of somebody’s puzzles and that happens.

There’s lots of sports in this puzzle: PRO BALL, O LINE, OTS, Lyle ALZADO, LAYUPS and ONE AND DONE clued as [Like freshman hoopsters who enter the draft].

Some other things I noticed: 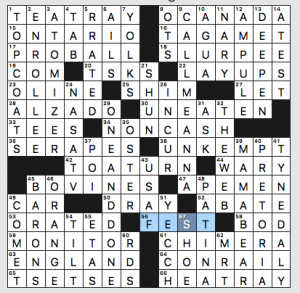 What I didn’t know before I did this puzzle: a whole lot of things, although many were details about people or things I’d heard of. I know who TYNE DALY is, although I didn’t know she’s the only person to win four Emmys for Outstanding Lead Actress in a Drama Series for the same role. Those were awarded for Cagney & Lacey. She also won two Emmys for other roles. I’ve certainly heard of  TAGAMET and I know it’s for heartburn but did not know it was made by Prestige Brands. I did not know that PRETORIA is home to the presidential residence Mahlamba Ndlopfu. My favorite new bit of info is this: [Its lyric “in all thy sons command” was changed in 2018 to the gender-neutral “in all of us command”] is referring to O CANADA. If only Canada weren’t so far north.

This is lovely. It appears to be a WSJ debut, too. Congratulations, Blake!

Our central revealer is at 40a: BACK INTO A CORNER [Trap, and a hint for how to enter eight answers in this puzzle]. The eight answers in question are the ones that include the four corners. Each entry is a word that can follow “back” to satisfy the clue, and each word is written backwards (right-to-left or bottom-to-top). However! Each entry as it appears in the grid (i.e. reading forwards) is also a valid word. How elegant is that! Very nicely done! 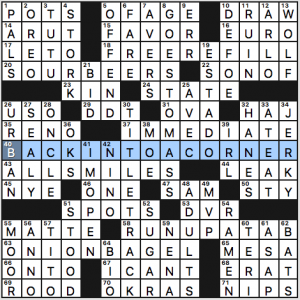 I’m very impressed by this. It seems simple, but to have a perfectly apt grid-spanning revealer and then eight suitable theme entries that are also words in the reverse order is really quite remarkable. To be sure, there are plenty of “back____” words, but most of them don’t work in the reverse (e.g. backbone, backlash, backhand, backpack). Kudos to Blake for going that extra mile to make an elegant grid.

And the fill is beauteous as well. Check out FREE REFILL, ALL SMILES, RUN UP A TAB, ONION BAGEL, and TITLE TRACK. Wow! GOES TO MASS might seem a bit “green-painty” and I don’t know how many people know about Belgian SOUR BEERS, but I love the entry (my wife is a big fan of Kriek, i.e. cherry beer). I also liked seeing IRL (“in real life”) and “I’M OPEN!”

There’s really not too much dross either. And what there is (A RUT, SON OF, ONCLE, etc.) is just not that memorable when there’s such a fun theme and great fill.

Beautiful puzzle! 4.5 stars from me. 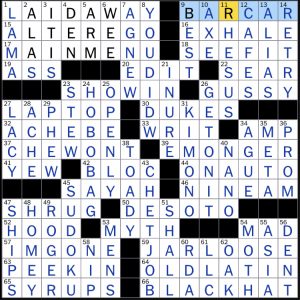 It’s Thursday, which means silliness is afoot in the NYT today.  Nancy Stark (who appears to be a debut! Go Nancy!) and Will Nediger constructed today’s puzzle, and it might make sense to look at the revealer first:

That explains the four answers circling the center of the grid where the answers seem a little incomplete – the black square at the center represents the letters HAT.

I got slightly distracted by a misread of 66A and thought four squares were affected, not four answers, which had me looking for HATs that weren’t there at other squares until I took another look at the revealer.  I’ve seen this theme before, and I think I’ve seen it done better.

That’s it! Enjoy your Thursday.

Having a bad hair day? So is the puzzle with its hair all tangled up! 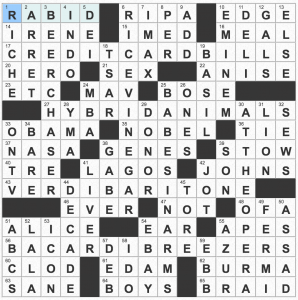 THEME: The word BRAID is jumbled in each of the long across answers.

If you haven’t played the game “Braid” by the way, you should check it out. Very fun app with clever puzzles to solve.

Anyway, I can’t say this was my favorite puzzle. Partially because only one of the theme answers landed solidly for me (CREDIT CARD BILLS). I guess HYBRID ANIMALS works too, though it doesn’t feel like an in-language term for some reason. I’m unfamiliar with BACARDI BREEZERS, and I don’t want to take the risk Googling them because I’m on school Wifi network- Big Brother is watching. I assume they’re sickly sweet. VERDI BARITONE was entirely new for me as well. According to Wikipedia it’s a “specialized voice category.”

I also don’t really understand how BRAID is “woven” into the answers. Seems to me like it’s jumbled or tangled. 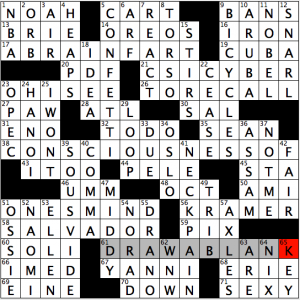 Today, BEQ invites us to DRAW A BLANK [Be unable to remember, and what you must do to make sense of this puzzle’s theme] at 61a. Four across entries have starred clues that literally require the solver to draw a blank after them in order to make the clues make sense. Like so: 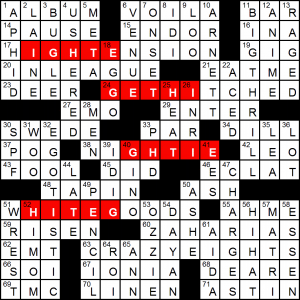 CRAZYEIGHTS was a popular family game growing up (or at least popular with my dad, which I guess is whose vote counts…) I didn’t realise it was well-known enough to build a crossword theme around. That was a pleasant surprise. This isn’t my favourite genre, and it’s been quite over-represented of late. EIGHT is scrambled and hidden across two parts of a phrase (or inside a word for the central entry). The entries themselves are rather prosaic: HIGHTENSION (wires), GETHITCHED, a NIGHTIE and WHITEGOODS.

My favourite entry was easily ZAHARIAS, a fascinating women. She was an Olympic Gold medallist in hurdles and javelin, a 10x LPGA major winner, and successful basketball player amongst other sports achievements. Success in multiple sports was a lot more feasible then than now, but even so she is exceptional! There are also a couple more golf bonuses with PAR and TAPIN.

The American pencil system has long been a mystery to me, but I did get around to a look at it. A [#2, for one] is an >HB< PENCIL. The American scale doesn’t seem to extend nearly as far in either direction. Are 2B’s just not found in the US? You’d think there was some more comprehensive, less esoteric scale around. It’s kind of similar to the USP suture scale, where the most common sizes are 3-0, 2-0, 0 and 1…