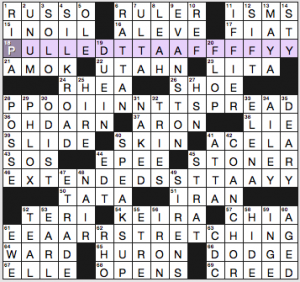 In this 16×15 puzzle, the four full-width theme entries double each letter in a word that gets lengthened, more or less, in a familiar phrase:

I like that Tracy alternates between the first and second word being the stretched noun, and that PULLED and EXTENDED are adjectival while SPREAD and STRETCHING are nouns. Nice balance. 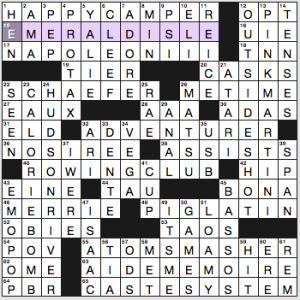 St. Patrick’s Day is this weekend, and we’ve got the EMERALD ISLE at 15a. So much nicer than that bar I passed tonight advertising its Saturday morning drinking (reservations required)!

Didn’t exactly know that CALORIE BOMB was a thing, though it makes sense, or that the PINK MARTINI was a thing. 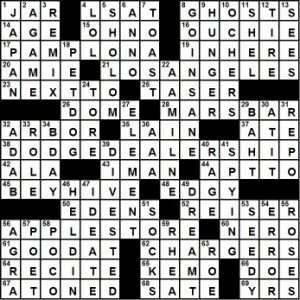 Clever theme, if a bit loose. Consider the reveal:

Pamplona feels different from the others and not just because it is one word, rather than a phrase. I want to replace it with a 2-word, 8-letter thing that is clearly associated with something that is a charger. How about VISA CARD? [Popular cash alternative]

Other items worth mentioning that I liked:

Not enough marginal stuff to mention. 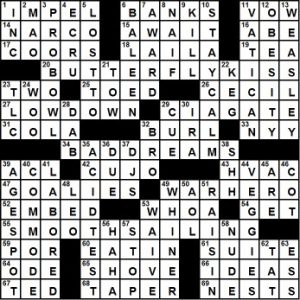 So, we have here a delightful array of new song titles emerging from the crossing of two older ones. In each instance, as the title indicates, the older ones were #1 at some point in time.

In addition to the above, this grid gives us CIAGATE,  PRO BOWL, STAY CALM
ACID TEST, and AGESPOT, in the ILSA arena. Non-ILSAs with some fun about them include the sideways stack VATICAN, OBESITY, and WEASLEY in the upper right, and, scattered elsewhere, COMMODE, LABORED, and VEGGIES.

Seeing all this good stuff in there made me take a second look for something to natick. Sorry. I’m just not finding anything that I object to. Very clean grid all-around, with what feels to me like a really unusual theme. 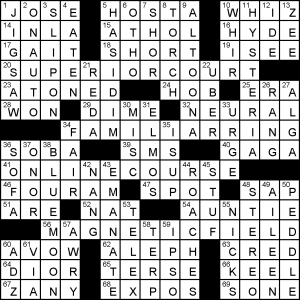 Four themers using synonyms for athletic venues in other contexts are clued wackily as though they refer to athletic venues: SUPERIORCOURT, FAMILIARRING, ONLINECOURSE and MAGNETICFIELD.