GREEN is the theme, clued as [Color, a shade of which ends each of the starred answers]. Pretty straightforward. Let’s see what we got. 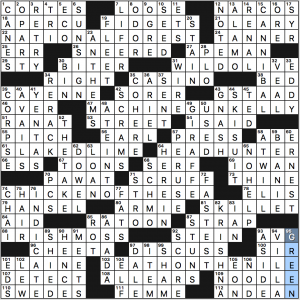 I guess when your theme is that straightforward, using uncommon entries like SLAKED LIME or trivia-laden clues will ratchet up the difficulty. But after a while it gets to be too much of a slog. Throw in oddities like RATOON, GSTAAD, SUNSIGN (crossing CORTES which I thought ended in Z and APERCU which I’ve only seen in crosswords), and SCRAMS clued as [Shuts down, to prevent a meltdown] and the slog feels longer.

There were plenty of goodies though. I liked seeing CANNIBAL clued Hannibal Lecter-style [One who might have a guest for dinner?], as well as GIRAFFE, THE TAKE ([Bad thing for a cop to be on] which, for some reason, I answered THE DOLE), and KRISHNA. Other goodies are CAYENNE, FIDGETS, ALL EARS, NO HELP, and SCRUFF.

All in all, a mixed bag for me today. The theme is rather ho-hum, and there’s a heavy dose of trivia throughout, but there’s some fun fill as well. 3.25 stars. 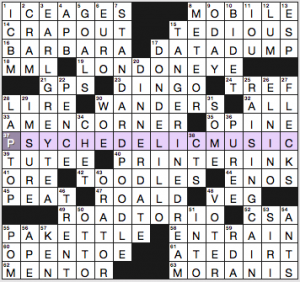 I do always enjoy a Ries themeless/freestyle puzzle. ( I haven’t done as many of his Rows Garden puzzles or his cryptic crosswords, but all three types of puzzles are available via his website.) This one’s no exception. Highlights: CRAP OUT, DATA DUMP, the LONDON EYE, PRINTER INK, “TOODLES,” EARL GREY TEA, STANDARD POODLE, a DINNER DATE, writer DON DELILLO, RAISING CAIN, a BIDET, and TANGERINE DREAM. It is entirely likely that I bought a Tangerine Dream album when I was in college. Kinda trippy electronic music. See also: 37a PSYCHEDELIC MUSIC. You know who was part of the psychedelic rock garage band scene five decades ago? Cruciverbal legend Merl Reagle. Enjoy the Greylock Mansion video (below) for the musical stylings of Merl and the band. 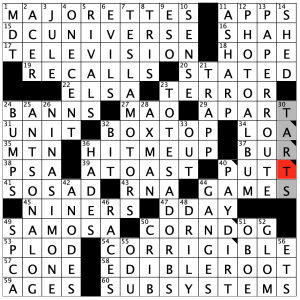 A couple of familiar names here, and Erik has more than one puzzle today! He also is part of the Stumper (see below).This was a slightly tougher LAT than I am used to. Not good news for the ACPT coming up! I think I will try to get plenty of sleep this week! A solid 4.7 stars for this masterpiece. 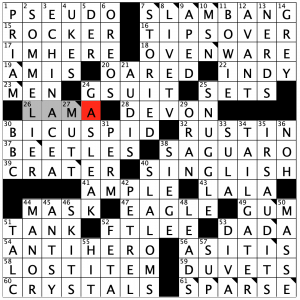 Who is this mysterious Garrett Estrada? It is in fact a pseudonym, a combo of Erik Agard and Brad Wilber. I couldn’t figure out how the combinom came about, but it is a play on a famous Brad (Garrett) and a famous Erik (Estrada). Very clever. And as you might expect from this pair, this puzzle is 7-Across! (See below!) I found this quite difficult until I got a decent toe-hold in it, and as you can see in the grid, I checked my answer quite a lot, and I was often wrong. This puzzle is chock full of great clues, and even an obscure term or two that I barely know. That’s why they call it a Stumper! 4.7 stars for this debut colloaboration

Hope to see some of you next this coming Friday!

Well, I knew there was something funky from the title. Should be “For All Intents and Purposes.” And sure enough, we’re dealing with eggcorns! 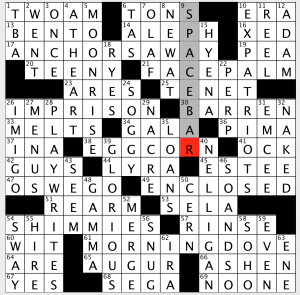 I had a couple FACEPALMs post-solve as only one of the answers immediately caught my attention as being misspelled (PLAYWRITES). MORNING DOVE and ANCHORS AWAY looked just fine to me as they were! Ha! The fun thing about eggcorns is that they all kinda make sense either way…

Here’s a more thorough explanation of them and a list of others.

Fun clues on 24D and 9D. The former being [Like Life at its worst] SOGGY, and the latter [Low key?] SPACE BAR.

Cluing of theme answers seemed somewhat inconsistent as sometimes the ? clue worked for both the base and the eggcorn- but the revealer clue with squirrel seems to suggest ACORN, which is not the entry. Maybe I’m just misunderstanding that part.

Puzzle definitely passes mustard. These were fun to figure out- In other words, I enjoyed the FACEPALM moments.