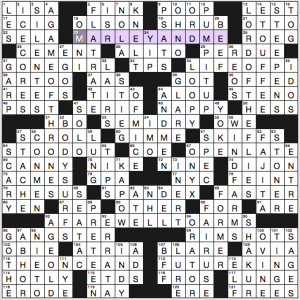 Mildly off-putting to have two more pairs of Across 8s besides the themers in the 5th row of the grid, but at least STOOD OUT, OPEN LATE, GANGSTER, and RIM SHOTS are all good fill.

4.25 stars from me. I enjoyed the theme and the general crisp modernity of the fill and clues. 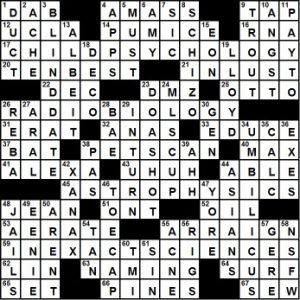 So, Ross gives us a punny theme involving “studies”:

First, I look for evidence to extend the puns. Last week I assumed cover band meant cover band, and it turned out to signify that non-cover bands’ names were found in the starting and ending letters of the theme phrases. Ouch!

Exact science is a term that is in the dictionary.  Inexact science, not so much, but I will assume these two terms to be opposites. I’m not going to write a lot here; a scientifically proficient person will enlighten me. The definition I highlighted says physics is an exact science. I would assume astrophysics to be a branch of physics and, therefore, also exact. I know psychology is an inexact science. But I thought biology, and thus radiobiology, was exact. Or does the word inexact just sorta refer to the fact that the punny definitions create an inexactness by their nature?

Okay, so there is some decent stuff elsewhere through this grid:

TEN BEST has a green paint feel to me, but it’s been used before.

PET SCAN across the middle with a punny clue almost enticed me to try to treat it as part of the theme.

ARRAIGN is a word everyone ought to know (said he, who arraigns about 200 people per week).

Also BLIND DATE, TOE CAP, DO A SHOT.  And then there’s IN LUST,  which, per the Ginsberg database, has not appeared before in a crossword. A tip of the hat to Ross for that one.

Based on that title, I thought we were having a Yosemite Sam themed puzzle for St. Patrick’s Day. Nope! Instead, another super-tight clever holiday theme.

THEME: Shake that ASP! If ASP is removed from each of the theme answers, then the wacky clues make sense… 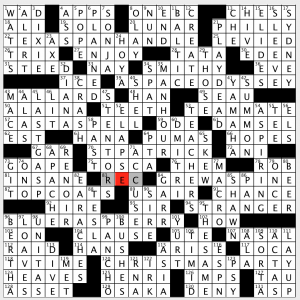 And one bonus themer in the center… 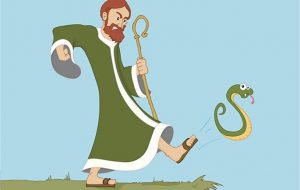 Was there ever a better pic that summed up a puzzle?

There’s plenty to like here… even if CAST ELL or G.R.E. WINE induced a playful eye roll. I like the “backwards” nature of the puzzle- where the base phrases are the actual entries and the solver is scratching his/her head trying to make sense of why TEXAS PANHANDLE– which is clearly correct- makes any sense whatsoever for the clue. This led to a true AHA! moment for me as I snaked (pun intended) my way down to the SE and filled in ASP before I had all the themers in place.

And wow! That’s a lot of theme! Perhaps the two down themers weren’t necessary as they’re a bit more basic than the others, but hey… it’s cleanly filled (okay, coulda done without SEAU) so… why not?

Had a heck of a time finishing the SW corner, mostly because I refused to change ME TIME to TV TIME.

It’s St Patrick’s Day, and the LAT is playing along!

All the theme answers have the same clue: [Green]. 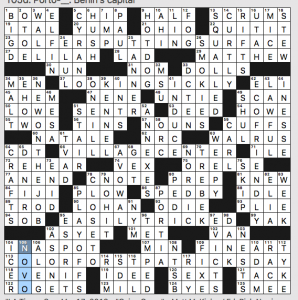 An adequate and timely theme that wasn’t all that much fun to solve.

What I didn’t know before I did this puzzle: that Porto-NOVO is the capital of Benin. There’s a reason why geography is one my worst Learned League categories. I’m not proud of this.

THEME: Phrases that have a “CH” sound in them are altered by replacement of a “QU” sound. 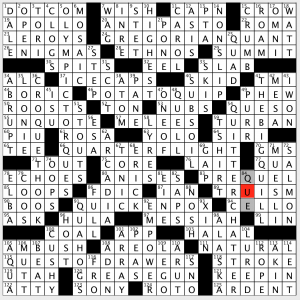 That’s a lot of theme and a lot of Q’s! As a person whose last name starts with a Q and whose name is impossible to anagram due to it (go ahead, you try… JIM QUINLAN), I fully appreciate the amount of work Mr. Houck must’ve put into this puzzle to make it work. While there’s a bit of weirdness as mentioned above, the theme answers are all fairly solid.

Must’ve been a serendipitous moment in construction when OLYMPIC TORQUES worked placement-wise with QUARTER FLIGHT.

Mostly pleasant fill- but I have to object to the clue on 43D [Boastful winner’s cry]. I entered I WON, then erased it just as quickly because the word “winner” is in the clue, therefore the answer should avoid forms of that word, right?

Thanks Family Guy for helping me out on 91D [Hard clams] QUAHOGS!

P.S. I think this is a debut for Warren Houck! If so, big congratulations!