I love Zhoquin Burnikel’s puzzles. They are elegant and fun to solve. This one is no exception. I’m ashamed to admit I had no idea what the theme was when I finished the puzzle. I had to go back and read every.single.clue to figure it out. There’s a revealer but I didn’t read the clue the first time and filled it in from crossings. I did accurately identify the theme answers: 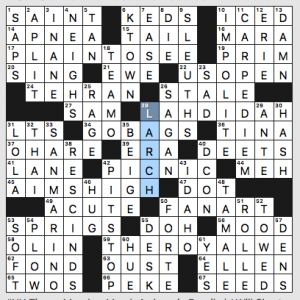 No rhymes, no internal words, nothing in common that I could see. So I scanned the clues. Aha! The very last Down clue is 61d [“That’s correct” … or a hint to the ends of 17-, 28-, 45-and 59-Across, in different languages]. The answer is YES. If you say the last words out loud, they sound like SI, DA, HAI and OUI – YES in Spanish, Russian, Japanese, and French. Nice!

What I didn’t know before I did this puzzle: that LARCHes lose their needles in the autumn.

Someone still needs to change the clock that determines when the WSJ puzzle drops, because it’s still appearing an hour later each night than when it’s supposed to. Ergo, I’m going to keep this brief.

Our theme is a chronological history of recording media which I found interesting even though I didn’t grok the theme until after I’d finished. 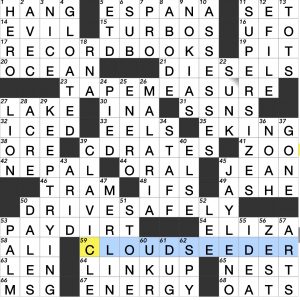 Cute. Although DVD and Blu-Ray are not to be found and “the cloud” isn’t really a medium. The data is still stored on a drive somewhere; it’s just that that somewhere is remote from your location.

But that doesn’t really bother me. I find the theme charming in a modern way. I especially like that each word in question is used differently in the entry. This is most notable with CD RATES.

But otherwise, a pleasant grid to start the week. 3.6 stars 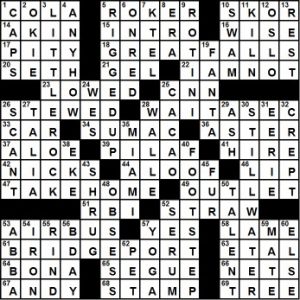 I like this puzzle. Mark offers up two-unit ILSA’s that are U.S. city names. Clued punnily:

Two one-worders, two two-worders. Good balance. And with a 10-10-10-10 theme in a pinwheel, I expect good fill all over, and I AM NOT disappointed. I don’t have to WAIT A SEC to TAKE HOME several more ILSA’s that are RIGGED UP in the grid. Including ANYHOW, ON RED, FOOTSTEP, OUTLET, and AIRBUS.

Not the first puzzle nor a solo from this team. In fact, it’s the second Monday puzzle from this duo in three weeks! Let’s see what they have in store: 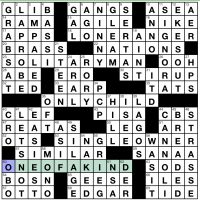 18A: LONE RANGER [Tonto’s friend, with “The”]
23A: SOLITARY MAN [Early Neil Diamond hit]
36A: ONLY CHILD [Offspring sans siblings]
53A: SINGLE OWNER [Used car selling point]
60A: ONE OF A KIND [Something unlike any other]

This is a solid Monday theme. I like that each of the themers starts with a common synonym of the others, and my only nitpick would be that lone, solitary, only, and single are adjectives while one is a noun. Aside from that, thumbs up from me on the theme.

The only women referenced in the puzzle were SIGNORA, Buffy the Vampire Slayer in the clue for 3D, and Jill in the clue for 37D. That’s it, and that’s a bummer. If you compare that with the number of men in the puzzle (RAMA, TONTO, The Lone Ranger, Neil Diamond, SOLITARY MAN, ABE, TED, Bobby Kennedy, EARP, OTTO, EDGAR, STEEN, RORY, Jack, and GRIEG) and the fact that some of the fill could have been clued via women (including NIKE as the goddess), the disparity is really apparent. I also didn’t quite enjoy BOSN, LAPROBE, or the alternate spelling REATAS. Otherwise, a pretty easy sail. 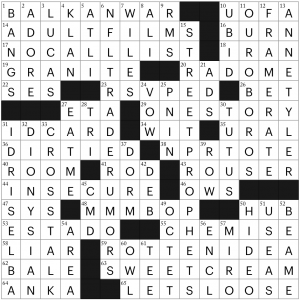 Ok wow this is post is late! Here are five interesting things: