This week we’re looking for something that’s “six letters long” — and it won’t be too tough to find it, according to Mr Gaffney:

(Side Note: Follow @CrosswordButler on Twitter to get notified when new [mostly free] puzzles are published.) (Side Note #2: Matt is referring to last week’s MGWCC, which was somewhat more challenging than a usual Week 2 from him.) 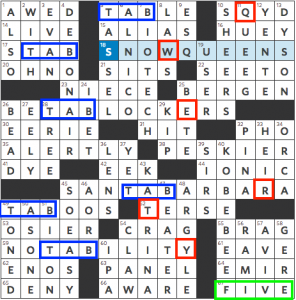 The big hint this week is in the final across entry:

Remember typewriters? Clickety-clackity things, put a piece of paper in, tap on the keys, make words, hear a satisfying zip-ching sound when you hit the carriage return lever. And while the longer entries don’t seem to have much in common, it turns out that six entries in the grid have the hidden word TAB. What happens if we move five spaces over from the TABs? (And it’s five spaces, including  black squares, not five letters.)

I didn’t have to move the fingers on my left hand much when I typed that, because laptop keyboards inherited the QWERTY keyboard layout from typewriters. It was developed in the 1870s and is still the most common keyboard layout for Latin alphabets. QWERTY is also an acceptable Scrabble word, per the Tournament Word List, and it’s this week’s contest answer.

I’m glad women no longer have to leave things to [12d: Matchmaker in Anatevka]: YENTE.