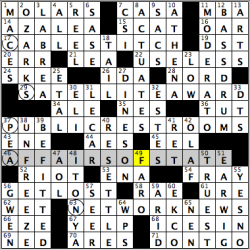 Good day, everybody! Here is hoping you’re doing well on the penultimate day of winter!

Today’s reveal was just amazing, as there are circles at the beginning of each of the five theme entries. When filled, the circles spell out C-SPAN, the public service channel that covers the ins and outs of our United States Congress. Furthermore, each of the first words in the theme entries is what each of the letters of “C-SPAN” stand for, Cable-Satellite Public Affairs Network. Oh, and March 19, 1979 was the day that C-SPAN first launched, making today the 40th anniversary of the network. That’s anything but a bore, which a lot of people think the network is.

Tore through this grid without having an idea of what was happening with the circles, and that made the reveal even tougher to see when I had put in “evening news” instead of NETWORK NEWS. After untangling that, that’s when the a-ha moment happened. After solving today’s grid, many people now will know both I, TINA and I, TONYA (48D: [2017 biopic starring Margot Robbie as figure skater Harding]). Here’s guessing that the latter won’t take off and be a crosswordese staple in many published grids to come like the former. Definitely had a trip down memory lane seeing one of my old stomping grounds, The OZARKS, in the grid, especially since it referenced the state I was living in when seeing the range, Misery…err, Missouri (2D: [Missouri mountains]). Just kidding, folks, especially those in the Show Me State. Love me some MO, even if I haven’t been back there in about 15 years. MODERATO was definitely new to me, as music terminology will never be a strong suit for me (11D: [Tempo that’s neither fast not slow]). It’s sports time, and though I could bring up former college football head coach Gary NORD, who was the head coach of a school, from 2000 through 2003, that’s popular in crosswords, UTEP, I went in another direction (28A: [North of Normandy]).

“Sports will make you smarter” moment of the day: NEN (65D: [Three-time All-Star pitcher Robb]) –  One of the top relievers in the 1900s and the early part of the 2000s, Robb Nen recorded 314 career saves, most of them coming as either a member of the Florida Marlins or the San Francisco Giants. Nen was a part of the Marlins’ team that won the World Series in 1997 and was the closer of the San Francisco Giants team that went to — and should have won, in my opinion — the 2002 World Series against the Anaheim Angels. While a member of the Giants, and because of his role as the pitcher who came on to record the final three outs of a game, some San Francisco fans (notably, my college roommate who was born and raised in SF) nicknamed the ninth inning “The Nen-th Inning.” Oh, and any time he came in the game during a game played in San Francisco, his walk-out music was Deep Purple’s “Smoke on the Water,” which gives me the green light to embed that amazing song on here! Enjoy!

Let’s “Follow the Clues” to see what this puzzle has in store for us: 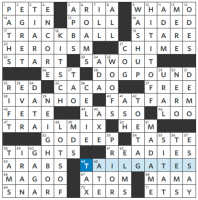 A consistent, clear theme that worked well. Each theme entry is following the clues to a celebrity via some kind of following action – track, dog, trail, and tail. I was pleased that stalk or any of its synonyms weren’t included – that’d have given this puzzle a creepier vibe. Only have two 9-letter themers and two 8-letter themers certainly makes for a light theme set, but I’d rather that than a puzzle jampacked with themers and less ideal fill.

Speaking of less ideal fill: FAT FARM. If it’s in your lists, cross it off. It comes across as cute, but it’s mean and hurtful, especially when you think of kids in these contexts. No lifelong body issues will be cemented there. Nope, not at all.

What I did appreciate was the representation of women in this puzzle: Lucile BALL, MAMA, ADA, Whoopi/CELIE, and Lady GAGA. Not a ton of entries, but more than most puzzles so … yay? Yay. I also liked these other entries: KITSCH, XERS, and TOE TAG (though morbid).

That’s all for now – see some of you at ACPT this weekend! 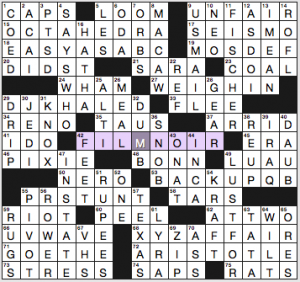 Ooh, I like this theme. The 26 letters of the alphabet appear in sequential chunks in the theme answers:

Not a perfect execution of the theme concept, but pretty good.

Besides the DJ Khaled clue, there was another error in the puzzle. 5a. [Weaver’s devices], LOOM. Well, that’s careless. A plural clue for a singular answer, at least in the .puz file.

There’s some clunky fill in here as well: crosswordese ODA, prefix SEISMO-, uncommon plural ALTI, awkward partial ON AT and the nearby awkward AT TWO repeating the AT, plural Greek letter TAUS. On the plus side, I liked IN-STATE tuition, Bobby FISCHER (we would also have accepted Jenna Fischer here), and “SAYS WHO?” 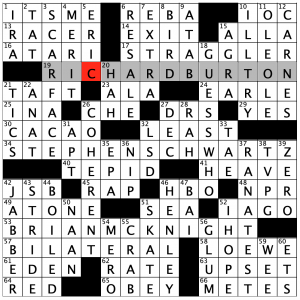 The tagline here says “yet they never won.” After the recent awards show cycle, the themers here are some interesting bits of trivia on those who have been nominated multiple times but have never won the award they were up for:

Yeah, I didn’t know any of this. I may have read about Burton never winning, but I don’t follow the Tonys that closely, and I didn’t realize McKnight hasn’t won. I thought he was part of a group at some point, but that was a family member who was in the group Take 6. All in all, a puzzle should teach you something, and this puzzle definitely fits that bill. 4.3 stars this week.

That is all for this week’s Jonesin’! 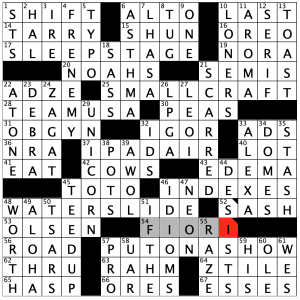 A nice, fairly easy straightforward Tuesday puzzle today, with a slick revealer at 57-Across:

I thought this was neat. Yes, we are all familiar with a stage show, a craft show, an air show and a slideshow. Gail and Bruce have definitely “put on a show!” Sometimes I think i am too nice a blogger, but I am in a good mood since the ACPT is this week! Hope to see a lot of you in a few days! Regardless, this is still a very clean puzzle. A solid 4.5 for today’s LAT.

Have a great day, everyone!

What’s the theme? Who nose!

Didn’t get the theme until the revealer- and even then balked for a couple seconds. Probably because the clue for it was a bit clunky. It seems to say that NO “SE” JOBS are performed on the theme answers, but I’m still not fully understanding how that makes sense. I mean, I get that SE is missing from the base phrases- but how does one perform NO JOB in any context?

Took me about 3 minutes longer than average. Felt like there was more bite to it than the average Universal (not a complaint at all).

Fun diversion after a stressful day, though. And isn’t that what we’re looking for?