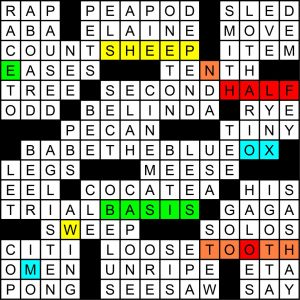 Matt here, self-blogging since joon’s internet is out today. We were looking for a five-letter plural noun and our puzzle is titled “More Than One Answer.” There appear to be five theme entries, so we’re probably looking to extract a letter from each one. they are:

First insight: the last word in each of these has an irregular plural:

Second insight: there’s a grid entry one letter off from each of these:

Those taken in order yield contest answer WOMEN, itself an irregular plural. And hey, it’s International Women’s Month, so how do you like that!

4.15 stars. Cute idea but one solver pointed out an inelegance: SHEEP is already plural as used in the first theme entry, so I should’ve gone with BLACK SHEEP or something similar. Also OBELUS in the grid caused some confusion since its plural is the five-letter OBELI. Probably too random to count (it doesn’t really account for the five theme entries, except as a general plural) but I’m going to ask the panel to decide on that today. Didn’t help that the obelus symbol didn’t take in the original PDF so I had to send out a correction about it, drawing extra attention to that entry.

249 correct entries, so a week 3.5 or 4 instead of the intended Week 2/5. Looks like I might need to try for a Week 2 yet again since I don’t want to shut so many people out during Lucky March!