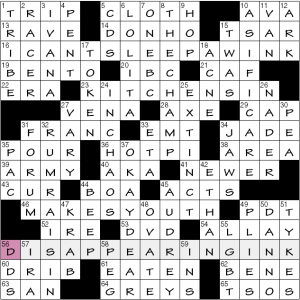 Sequential theme, explained via the revealer at 56-across: [Liquid evidenced by the answers to this puzzle’s starred clues?] DISAPPEARING INK. Those are:

So. The letters I-N-K vanish from original phrases one at a time, beginning at the last. That is, presuming the words were written left-to-right, the NEWER (41a) letters wink out first: 16a is unchanged, 23a lacks a K, 36a sheds NK, and in 46a INK disappears completely. (kitchen sink, hot pink, makes you think)

Two immediate observations: First, despite being explicitly part of the theme, it seems that by convention the wackified clues should bear question marks. Second, the final affected entry requires a respacing of the letters—the orphaned TH- appended to the preceding YOU—which is more than a simple ‘disappearance’. However! Since the PI—private investigator—of the preceding themer is actually an abbreviation (P.I.) that can similarly be seen as an aberration from the original even though it’s ‘one word’, it now looks like a kind of sequence: full word, initials, appended bigram.

Despite these points of arguable weirdness, I certainly like the clever conceit of the theme.

SO AND SO is the central revealer clued as [Name better left unsaid, or a literal hint to what the starred answers contain]. Each starred answer is a two-word name or phrase where each part contains the bigram SO. 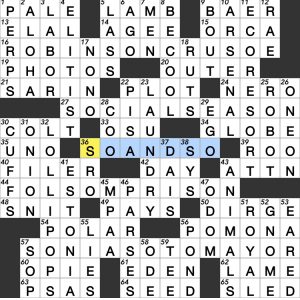 Cute. And it works. It would have been slightly more elegant if each theme answer was a person’s name, but that may not have been possible, and I still think this works fine.

My favorite non-theme entry has gotta be “BE COOL!” [“Take it down a notch!”]. Reminds me of the current iteration of the Scooby-Doo gang Be Cool, Scooby-Doo which I watch occasionally with my 10-year-old. The characters are quirky, especially Daphne, and the show is genuinely funny, even for adults (at least this one, anyway).

ECO-RESORT feels a bit made-up, but who doesn’t like LOLLIPOPS? ESTONIA gets some of the limelight as well.

Toughest clue has to go to [All purpose?] for LAUNDRY. I kept returning to it again and again during the solve, but I needed most of the crossings before the light bulb turned on. Well done.

Not much else to say; everything else proceeded in a smooth, standard fashion. I’ll give it 3.5 stars. 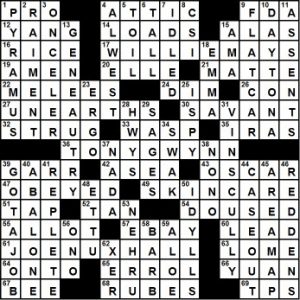 A seasoned veteran of constructing, editing and publishing crosswords presents an unusually fun theme with sparkling fill. As expected, of course:

As for the rest of the fill, we have lots of good stuff. Including ILSA’s SKIN CARE, A.L. WEST, FLAT CAR, GOT A JOB, CASE OUT, and AREA MAP. And non-ILSA good fill PYRAMUS, RAIMENT, ONCE-LER, DAYTONA, and ABALONE. No crud at all. Great clues! 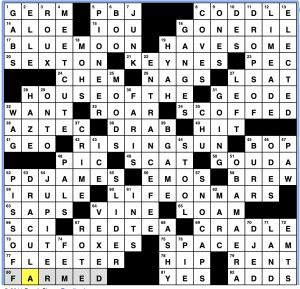 Paolo Pasco has this week’s supersized AVCX, with a 17×17 grid that hit its 2.5 difficulty rating right on the nose for me

The theme here brought me back to when I DJED in college, for reasons I’ll explain after I cover the theme answers:

So, in college I had a radio show with my roommate, and one episode, we tried to represent the solar system in songs, and though it took some work finding songs or artists with each of the planets in their names, we did it.  This was a speedy but pleasureable solve for me

Since this was a pretty simple theme, the rest of the construction here was super clean – I liked the one-two pairing of clues at 6D and 7D a lot — “This homemade puppet show SUCKS” for BOO followed by “Throw out, like homemade puppets after someone mocks your show :'(” for JUNK told a nice little story.  Take that, Hemingway!

Other fill I liked: GONERIL, SEXTON, GEODE (as “Glam rock?”), PD JAMES (whose “Death Comes to Pemberley” is still sitting in my to-read pile…), OUTFOXES, MEET CUTE, OBAMA ERA, and PISS OFF 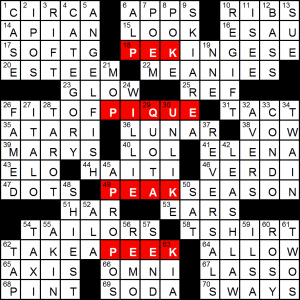 Today’s LA Times theme features three answers with a homophonic set: PEAK, PIQUE, and PEEK plus another iteration embedded in the word PEKINGESE. Somewhat inelegant when one theme answer is unlike the others, but there are no phrases with the short form, PEKE, that seem usable, and racer CHARLESPIC’s career never really reached the required for heights for crossword-dom.

The compact grid design and the type of theme fit more with an early week puzzle – Wednesday in the LA Times can sometimes seem awfully like Monday! One clue did puzzle me, but I think that was idiosyncratic: [Pass along, with dubious etiquette], REGIFT – I assumed it was referring to table manners on first reading.

[“A tradition __ any other”: trademarked catchphrase for The Masters, UNLIKE] – your yearly reminder that said tradition includes layers of sexism, racism, and sundry bigotry.