The Fireball puzzle is a contest which goes through Monday. We will have a review once the contest is over.

We have a pronunciation change theme in which consonant blends ending in R (dr, thr, tr, and br) become their own syllables with the inclusion of schwa sound (roughly). 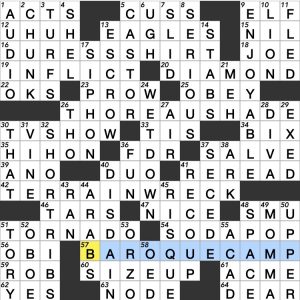 I like the variety in using different consonant blends, and there’s definitely some humor in there. Even though I’m sure this type of theme’s been done before (maybe many times), if the puzzle is clean and ENJOYABLE, I’m happy to give it a thumbs-up.

I started off badly by putting RANT at 5a [Churn out cross words]. This led to ACK at 6d [“Eww!”] and even a consideration of TEDIOUS at 8d [Grave]. Consequently, my whole NW was a mess until I returned to it at the end, realized 5a was the CUSS word, and was able to move on.

Nice to see BIX [Jazzman Beiderbecke] come up in the grid. I think it was last week that Amy posted on Facebook about a couple who named their daughter KVIIIlyn (that’s Kaitlyn with Roman numerals). I commented that BIX Beiderbecke’s little-known nickname was “benign.” True fact. (That is, it’s true that I made that comment, but I fabricated the bit about the nickname.)

RISQUE crossing BAROQUE makes nice use of the Q. I also liked the friendly “HI, HON!” as well as TORNADO and SODA POP even though I don’t know anyone who uses that whole phrase.

SIPHON is not a word that appears very often, and to me it both looks and sound like the name of a Greek god. The god of gasoline theft, perhaps?

One clue of note: [Whirled power?] for TORNADO is a pun on “world power.” I just got that.

I leave you with MOMMA [Comic strip whose title character was Sonya Hobbs] by Mell Lazarus. Be sure to check out this touching article about how the final one-panel strip came to pass. Oh, and good luck to all ACPT combatants! 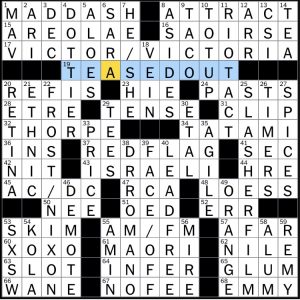 It’s Thursday of ACPT week – will I see you there?  Christopher Adams has today’s NYT puzzle, and boy howdy, was it on my wavelength.  I spotted exactly what was going on at the first theme clue and sped through the rest, getting within 20 seconds of my best time on a Thursday:

I LOVED this theme, and the structure of this puzzle – the left-right symmetry and placement of the theme clues, plus the literal slashes entered into the grid, all TOT UP to a very fresh-feeling Thursday.  All of the movies feel get-able and notable enough, and the crossing values for those are nice (AC/DC, AM/FM) are nice, with the exclusion of the kind-of-clunky-as-a-term HE/SHE (I accept it is a third-person pronoun, but just use singular they!) 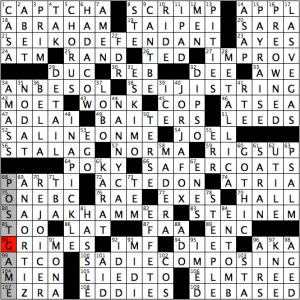 In anticipation of the ACPT this weekend, Brendan has given us another crack at his excellent, brain-busting 19×19 puzzle from the 2013 ACPT, titled “Say What?”. Rather than review this puzzle again, I’ll just link you to Matt’s Fiend review of this puzzle from 2014, which I think holds up quite nicely. In addition, Brendan has posted a short Q&A with reigning ACPT champion Erik Agard, which is most certainly worth your time.

At the 2013 ACPT, this puzzle took me 12-13 minutes (out of an allotted 30 minutes). Solving at home five years later, on the computer, having solved this puzzle before, it took me a little less than 5 minutes. As a point of reference, Dan Feyer solved it in 5-6 minutes, on paper, the first time he saw it. So… he’s pretty good.

I hope to see many of you in Stamford this weekend (if you see me, please come say hello!), and I’ll see the rest of you back here next week! 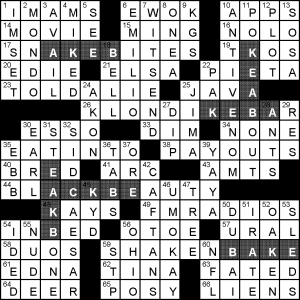 Apologies for the day late blogpost. We are having a power crisis in South Africa at the moment, in more ways than one. The revealer today is the really spiffy brand name SHAKENBAKE, reinterpreted to be SHAKEN/BAKE. As said before, anagrammed hidden words is one of my least favourite tropes, but this one has a clever revealer and a couple of really good theme answers: another brand, the KLONDIKEBAR and BLACKBEAUTY. Dr. Sessa pushes the limits by including two downs. I’m not sure POKEABOUT and the somewhat nonspecific STEAKBONE (if it’s a TBONE, that’s a really bad choice to give to a dog, they can lodge in the pharynx or oesophagus (or somewhere worse)) are worth it, though…