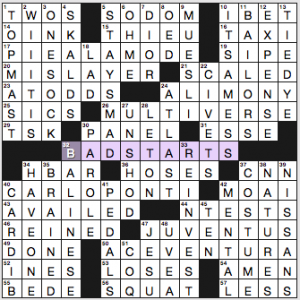 I was hoping the Friday puzzle would improve my mood, but alas (or “OH, ME,” said no one ever), it really only made me cranky. For a 68-worder, I expect to see pretty smooth fill with a modicum of zippy stuff. The contrived ONE SOCK duplicating a word in the maybe-contrived HAVE ONE, uncommon BAILORS, crosswordese N-TESTS and ESSE, fairly dated SIPE, and lifeless H-BAR were the worst bits (along with that OHME). Oh! And MISLAYER. [Lousy floor contractor]? Give me a &%*$ break. And WII-ITIS has a rather 2007 vibe. ACE VENTURA is older than Wii, but I’m more sanguine about pop culture’s staying power even though I never did see any of the Ace Ventura movies. Lots of Scowl-o-Meter action here.

Favorite fill: PIE A LA MODE (warm strawberry pie with dark chocolate ice cream sounds good, no?), MULTIVERSE (which I’ll bet Brendan put into this grid long before the multiverse movie Spider-Man Into the Spider-Verse came along), Italian soccer club JUVENTUS (I hadn’t known that its name meant “youth,” but I always wanted it to), CARDI B, Norse SKALDS, and STAYS MAD (mainly because the Twitter use of “stay mad,” with or without hashtag format, is so good). 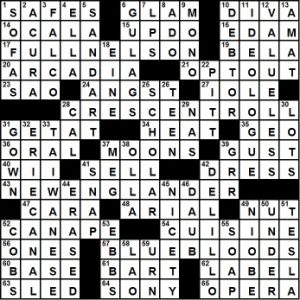 With this puzzle, Robert Harris MOONS us (see 37a) with

One word I didn’t know, and I won’t criticize it, is IOLE. I see it was in a CHE puzzle a couple years ago and that Hercules loved her, so she can’t be all bad.

I’d love to write more, but I need to pack up for Stamford! 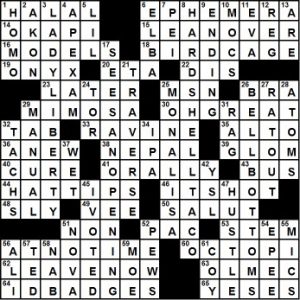 Hmm. We have Utah north and south and a short ell east and west. I wonder what this is about. I solved it by hand a few hours ago and did not get the theme then, so bear with me. Let’s start with the reveal:

OPENING BELL, TACO BELL, LIBERTY BELL ... And we’re just not going to talk about whether and to what extent this theme works, if at all, only because the theme answers are vertical. It is what it is, and it took me a long time to get it. YMMV.

Let’s not overlook the value of the rest of the fill. OH GREAT! IT’S HOT! AT NO TIME LEAN OVER the BIRD CAGE. Just appreciate the EPHEMERA of the MONA LISA and the ID BADGES. And LEAVE NOW! Or, rather, right after HAT TIPS to the constructor and the editor.

(We don’t always blog bonus puzzles, but this one’s a debut and we wanted to mark that.) 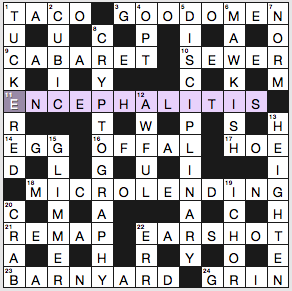 This is an easy cryptic, with many anagram clues that jump out at you because of unusual phrasing. For example, 11a. [Pelican heist goes wrong, resulting in brain disease (12)], ENCEPHALITIS—what the heck is a “pelican heist”? How would a heist gone wrong lead to neurological disease? And 20d. [Blended carb makes cranky person (4)], CRAB—what’s “blended carb”? Cryptics are trickiest when the surface sense reads more like a plausible sentence. The surface sense is less present in the non-anagram clues, too. E.g., 3a. [Oaf going around vault to reveal four-leaf clover, say (4,4)], GOOD OMEN, GOON around DOME. Can you envision an oaf going around a vault, and that vault perambulation somehow uncovering a clover? I cannot. The MAWKISH clue hinges on “Kim Shaw,” which is less effective than using a famous name like Meg Ryan (who famously anagrams to Germany).

The best of the clues, perhaps, is 24a. [Big smile from red head captivated by alcoholic beverage (4)], GRIN. The “head” of the word red is the letter R, and it’s “captivated” within some GIN. You can easily envision a redhead (question for cryptic experts: could the one-word redhead serve as fodder for R, or does the head have to be a separate word?) beaming at a cocktail the bartender has placed before them.

I need help understanding how we get from 15d. [Lacking luminance at both ends, gem miller fails to shine faintly (7)] to the answer, GLIMMER. Anyone? 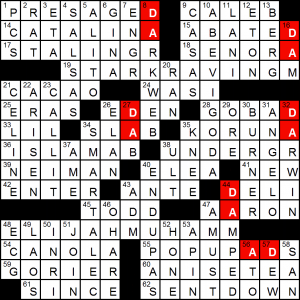 Always nice to see a more intricate theme in the LA Times puzzle. I got a whiff of the theme early, as I spidered down to ISLAMAB and realised something was likely going on with ADs. I thought the AD was going to be hidden in the central square initially, but was quickly put to rights. I also can’t be the only person who also mulled over ISFAHAN for that square since it is a (provincial) capital, but the geographical directions are wrong even if it is fairly proximate to Kabul. As it is, the ADs POPUP into adjacent down answers. The first two I found, ISLAMAB(AD) and ELIJAHMUHAMM(AD) had a Muslim subtheme going, but that doesn’t extend to STALINGR(AD), UNDERGR(AD) or STARKRAVINGM(AD).

Despite the busy theme, we get plenty of action in the long downs: ABEVIGODA, SMARTALEC, DARKWEB (I’d quibble that it’s not limited access, since no-one is specifically denied access to it, the people using it are just difficult to trace, at least directly). BURNER is also a punchy answers, much beloved by the alphabet soup shows – NCIS, CSI etc.

On the other hand, there are many inane short answers: WASI and APIN are bottom of the barrel partials for starters.