Common phrases have a MR. inserted before the final word turning the ending into a well-known figure. 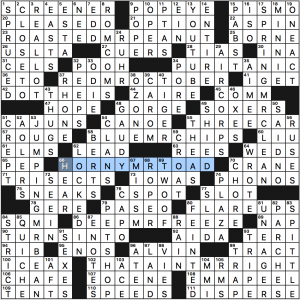 But surely at least a few female entries could have been included. How about ELECTRIC MRS. FIELDS?

There’s some good fill here as well like EMMA PEEL (I loved the British Avengers when I was a kid), “PLEASE DO“, LOCKED IN, POPEYE, CAJUNS, PEEPS, and PET SHOP.

But there’s also an over-reliance on tiresome fill like RE-ALLOT, TWO OF, UNEAGER, E-NOTES, AOLERS, ICE AX, CUERS, ETO, I GET, EASTS, and EDD. These detracted from the fun.

If you’re competing today at the ACPT, go get ’em!

It’s ACPT Day! If you’re using this grid to warm you up for a day of puzzles, you definitely could do worse. David brings us a lively puzzle with an intriguing design. 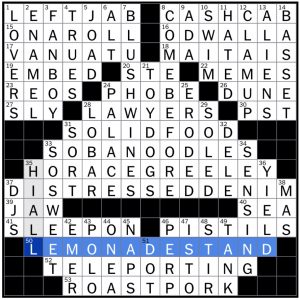 What did you think of the shape of the grid? My first thought was that it looked like an old-fashioned alarm clock. That would be appropriate to get you up so you could make it downstairs to the tournament. But then I realized it looks more like a ninja bunny, which, yeah, definitely a ninja bunny.

With three distinct sections I was worried I’d get stuck in one of them. The NE fell first with CASH CAB and a fun clue for ALIENS [Ones supposedly eligible for, but never yet seen in, the Miss Universe pageant].  I then worked my way steadily through the main section with the help of TELEPORTING, DISTRESSED DENIM, and SOLID FOOD. Bu the NW (the right bunny ear) was tougher since I had OKIE instead of JOAD and WHITE instead of BLUSH. But making those corrections gave me LEFT JAB and the rest fell easily.

A lot of goodies in this grid: LEFT JAB, CASH CAB, VANUATU, SOLID FOOD, HORACE GREELEY, DISTRESSED DENIM, LEMONADE STAND, TELEPORTING, and ROAST PORK  And that’s just the Acrosses! In the Down direction I’m loving FANBOY, TOY DOGS, CLAM UP, “HI ALL!” and “SO SWEET!”

With so much openness, there’s bound to be some clunkers like EMER, ONE A, and IS TO. But for me the goodies far outshone the negatives. And of course, how can you not love a ninja bunny! Four (throwing) stars.

Best of luck to all competitors! 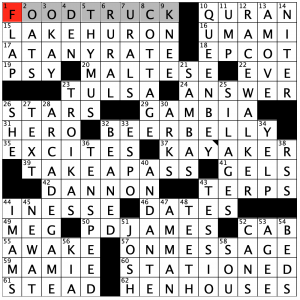 This is the puzzle for the Saturday of the ACPT! Yes, I am blogging this a little early, since I know sleep will be on short supply! I wish Kyle was attending this weekend, but since he is not, that is one less Midwest contender for me to deal with! (I will try to give an update in the comments this weekend on the hotly contested Midwest Regional battle!) Another great puzzle by Kyle, who is becoming more and more prolific as a constructor. 4.6 stars.

Some of my favorite parts:

I hope all of you who are at the ACPT with me have a great time and please say hi! 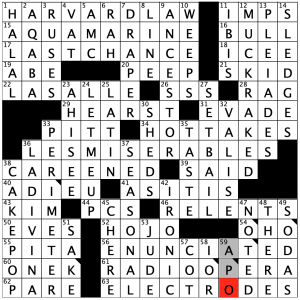 Under twenty minutes!! I will take it. As mentioned above, this is the ACPT weekend, and I am sure many will be solving a printed version of this puzzle in their leisure time. I found this to be quite difficult, but then again, it IS a Stumper! I also hope to meet Matthew Sewell someday; I hope he is in attendance! He has become a regular Stumper contributor, and I hope they keep on coming. 4.6 stars for another head-knocker that I hope you all are enjoying as much as I did! (Yes, there are several error marks in my grid image!)

Again, best wishes to everyone competing this weekend!

Feeling blue that I have to forego the ACPT once again. But here’s a colorful puzzle to cheer me up! 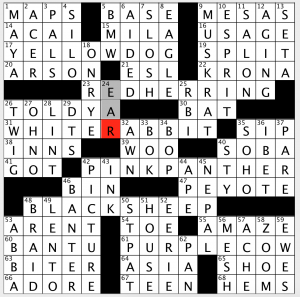 Super simple puzzle with virtually every themer a gimme. Perfect confidence booster for those warming up for a competition!

YELLOW DOG was the only one I needed any crosses for- and with my time at 3:09, it played a minute easier than average.

Has anyone ever had a PURPLE COW out there? It sounds… really gross.

Classic theme- colors and animals as an idea feels familiar- but with six theme answers and a cleanly filled grid, what more can you ask for? It was a good time!