That old favorite, the NATO PHONETIC ALPHABET, makes its appearance once again for our enjoyment. The theme takes well-known phrases that include a word that is a homophone for a letter (like “sea” or “why”), and replaces that word with the corresponding word in the PHONETIC ALPHABET. Got it? Check it out. 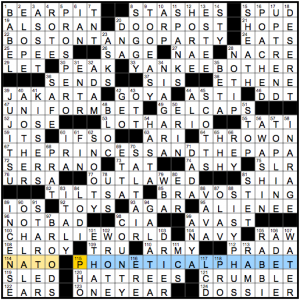 I found this to be an enjoyable theme and it definitely helped me towards the bottom once I had grokked it. None of these caused me to burst out laughing, to be sure, but I felt they worked well enough, with YANKEE BOTHER being the most awkward of the lot.

Entries like HORAE, ALIENEE, and TILTS AT may be necessary evils at times, but there are a lot of goodies here. I’m liking LOTHARIO, SERRANO, and I’m eyeing that JAKARTA/JUJITSU crossing at the J. Good stuff. SISYPHUS and PROSPERO make a good symmetrical pairing, though I don’t know much about GALATEA [Pygmalion’s beloved]. The E there was my one error; I wanted an I, because I thought the crossing [They might hold derbies] was trying to spell “hatteries”, if that’s even a word. (Huh! Whaddya know. It is!) But HAT TREES makes a better answer to that tricksy clue.

Speaking of clues, I liked these:

Overall, a solid Sunday outing that doesn’t get bogged down. 3.9 stars.

No sense in waiting five more years for the 2024 cicada season when the puzzle is ripe now*!  *Seems like one type of cicada is due to arrive in 2021, but I’m not going down the research rabbit hole…

THEME: Cicadas!  (CICADA is featured in a circle pattern six times throughout the puzzle.) 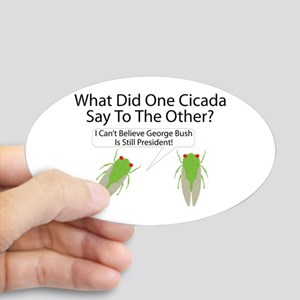 Seems light on theme? I assure you it’s not! It’s a very tricky feat to pull off the words-in-a-circle theme. It puts a helluva lot of restriction on the grid- and… AND… there’s an extra layer of elegance as the word CICADA rotates one letter counter-clockwise in each progression. Also, the two long down theme answers cross the central entry- so there’s another level of construction challenge.

I’m willing to make a bet (albeit a small one- five bucks perhaps?) that Evan initially wanted to use different types of bugs rather than sticking solely to the cicada, but hit some walls. While it would’ve been fun uncovering some other critters, you can’t complain about the help you get with the fill once you grok the idea!

Here’s to hoping everyone at the ACPT is raising a glass right now! (and I’m not talking about the one on NPR)

A reminder that’s it’s time for me to start going to the gym to shed the winter coat I’ve built up.

THEME: The word GYM is ascending in four of the down answers.

Simple, consistent theme with mostly crisp fill. Learned BALMORAL along the way and briefly wondered what BOLOGNA on top of CRONUTS would taste like. I’m guessing that’s not gonna take off as the next big thing in food truck treats (unless, perhaps, they’re HONEYED).

Thought the revealer would be CLIMBING WALL and briefly scanned the themers to see if any famous walls were ascending before changing course. 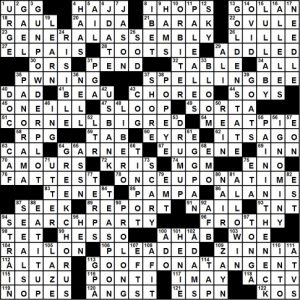 Prof George joins Christopher Adams for “End of the Line,” a puzzle during which 20 minutes seemed like an eternity to me. And now I am struggling with the theme. That’s a euphemism for not finding it at all.

23a *Country club? (note each starred answer’s last word) GENERAL ASSEMBLY–(I know, the answers are not starred, the clues are; but Universal’s puzzles are squeezed for space, and wording it this way saves space.) So …, 23a being a starred answer for present purposes, I am noting ASSEMBLY. I’m not fond of the clue-answer relationship here, especially the ?. The incongruity involved with club and a nation’s governing body doesn’t make me smile. So, I’m searching for another meaning of club and thinking that a general might be involved. (What was that club that Gen. Patton toted around with him called, a swagger stick?)
37a *National contest whose 2018 winning word was “koinonia” SPELLING BEE–Duly noted, the last word is BEE.
51a *Ithaca-based Ivy League team CORNELL BIG RED–Last word is RED.
78a *Fairy tale opener ONCE UPON A TIME–TIME.
94a *Rescue squad SEARCH PARTY–PARTY.
113a *Digress GO OFF ON A TANGENT–TANGENT.
3d *1605 conspiracy with an explosive name GUN POWDER PLOT–PLOT.
13d *California nickname, with “The” GOLDEN STATE–STATE.
55d *Nuisance PAIN IN THE NECK–NECK.
64d *Ancient drama group GREEK CHORUS–CHORUS.

I’ve noted the last word in each answer to the starred clues. Now, what do I have? BEE RED TIME PARTY TANGENT PLOT STATE NECK CHORUS.

End of the line? Country club? General assembly? You know what? I’m gonna sleep on this. Good night.

Awake now, hours later, next morning, I’ve decided there is no help to be found in the clue/answer combo at 23a. There is no general. There is no club. That leaves me with a title: “End of the Line.” A couple puzzles back, end was specifically used to refer to the last word of starred answers, the one farthest right. So, … THE LINE ASSEMBLY? THE LINE BEE? Aha! I see it, in reverse, sorta, kinda. We need to move key words to the oxymoronic front end of LINE, that is to the left! ASSEMBLY LINE, BEE LINE, RED LINE, TIME LINE, etc.

I will leave it to you, Gentle Solver, to decide whether the title is apt. Would the title “Front Line?” have worked?

First, let’s deal with PWNING. I’d never seen or heard of this word before, but hey! Pwn is in the book, so to speak. So, to George and Chris, I tip my hat for this first-timer.

Other fill of note includes CHOREO, PANORAMA, SEE ALSO, EAT IT UP, J-DATE, U.S. BANK, TEASPOON, PALE ALES, DRUM UP, ALLOW IN, IGNOMINY. Some of this grid’s fill I really like. Some, not so much.

Twenty minutes is reasonably fast for me, so I did not have a hard time with this puzzle, but wound up a bit ambivalent. What do you think?

I thought I had this theme all figured out and was rolling my eyes at it just a bit, and then I found the revealer for the extra dimension. No more eye rolls.

Each theme answer (helpfully asterisked) is a phrase or name that contains a flower.

The revealer is at 114a [Creature found atop the apt part of each answer to a starred clue]: BEE. Sure enough, there’s a BEE above the flower of each theme answer. Very nice!

That’s a lot of theme material, even for a Sunday-sized grid which means we end up with some icky and tired fill: ESTH, INSC, ESE, KEA, ERE, EIS, LGE. I suspect all the proper names in the themers may be off-putting to some solvers. I knew almost all of them and the rest were inferable from crossings and from the theme. I’ve never heard of DERRICK ROSE but I knew it had to be a flower. I enjoyed the puzzle overall and really liked the theme.

What I didn’t know before I did this puzzle: I’ve never heard of the band EMF.

Crossword Coincidences department: this is the second time in as many days that I’ve run into SET PIECES in a grid, clued each time as [Key movie scenes] or something very similar.

I leave you with one of my favorite movie musical numbers, referenced in 43d: