I figured out the theme early on. It’s a good Monday theme – accessible, solidly constructed, and fair. It didn’t thrill me but then I’m not the intended audience for Monday puzzles.

There are seven theme answers, which is a lot for a 15×15. I don’t think the fill suffers; I will stipulate that I am less likely to be irritated by fill than some others, so your mileage may vary. 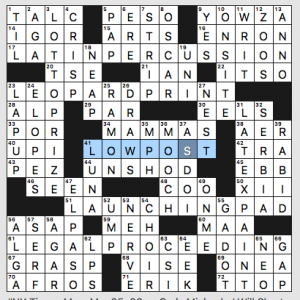 And the revealer: 62d [Old records … or a hint for this puzzle’s seven longest answers] is, as you’ve probably realized, LPS.

What I didn’t know before I did this puzzle: that the area of a basketball court near the basket is the LOW POST. Baseball, sure. Anything else, not so much. 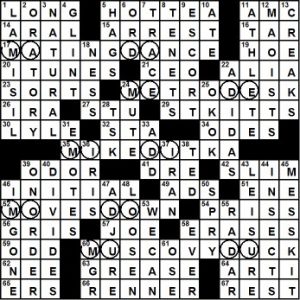 I’m liking this “Doctor’s Orders” puzzle by Stephanie and C.C..  (Is this a debut for Stephanie?) I see M’s and D’s circled in each theme answer. That covers the title’s doctor concept. I see five such answers, in alphabetical order. In each, both M & D are followed by the same vowel–difficult theme to develop, I sense. Now, I gotta figure out how this configuration covers the concept of orders. A closer look shows:

All I can figure out for the order concept is that the theme answers are … in order, and that makes me wish that 39d [Not in stock yet] ON ORDER  could have been IN ORDER, clued as either a reveal or a bonus.

23d is clued [Seedy, and an apt description of a word hidden in 3-, 9-, 29- and 33-Down], the answer being RUN DOWN. Each theme answer has the letters RUN spanning a two-word phrase. 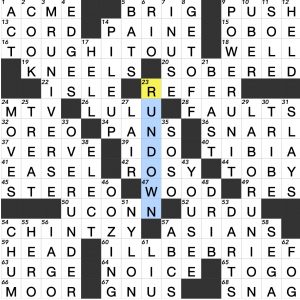 Works well enough, I suppose, but if you’ve seen this type of theme scores (hundreds?) of times, it’s hard to get excited about it. Still, this is a good theme for someone new to crosswords.

Frankly, I must not have been paying much attention during the solve since I was trying to watch the telly at the same time, but looking back over the grid, CHINTZY, TOUGH IT OUT, and “I’LL BE BRIEF” stand out as the funnest fill. I also liked seeing TOGO clued as [Country between Ghana and Benin].

One other clue of note: 61d is [Figure skater Alysa] LIU. She is the 2019 US national champion…and she’s 13, people! What were you doing at 13? Not winning national championships, I bet! Here she is with Jimmy Fallon:

Fantastic themeless offering from BEQ today. Hit more than a few walls, but it made that feeling of accomplishment when Mr. Happy Pencil makes an appearance all the better. 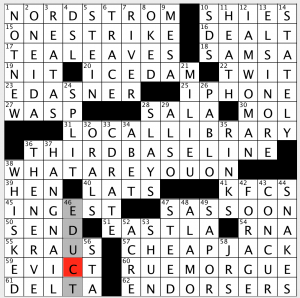 Things I didn’t know like KRAUS, MOL, SALA were all fairly crossed. Very hard to complain about anything in the puzzle.

I spent most of my time in the NE, where I tried a variety of different answers (I’M A WOMAN for I AM WOMAN, ELMER for SAMSA (makes sense, sorta!), DOPE for TWIT, SWATH for HEATH. Eventually it all came together in a very satisfying click. 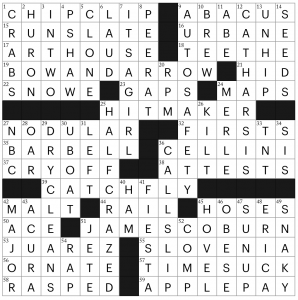 Happy Monday, all!  For those that went to the ACPT, I hope you all had fun and enjoyed the puzzles.  Patrick Berry, one of this year’s tournament constructors, also has this Monday’s New Yorker Puzzle.  Here’s some highlights from this week’s grid:

Y’all, I just left ACPT 2019 and it was a blast! The folks of CrossWorld really are the most lovely, genuine, earnest, nerdy, and wonderful people, and I feel so enriched from hanging out with them this weekend. If you ever have a chance to go, you should. I was one of 200+ rookies this year among the field of 700+ total competitors, and you can be part of that fun group next year!

Ok, on to this week’s Monday LAT puzzle by the legend herself, C. C. Burnikel: 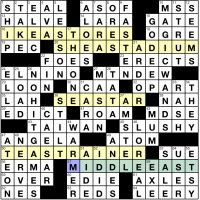 16A: IKEA STORES [Sellers of build-it-yourself furniture]
20A: SHEA STADIUM [Mets’ home before Citi Field]
36A: SEA STAR [Five-armed ocean creature]
50A: TEA STRAINER [Leaves-catching brewing sieve]
57A: MIDDLE EAST [Arabian Peninsula region, and what 16-, 20-, 36- and 50-Across literally have]

Fun! Each entry splits the word EAST across two words, and specifically as _EA ST_. (Bonus points for HALVE as a grid entry.) This is really cool since there aren’t that many words that end in EA and not that many in-the-language phrases or ideas that could be used as themers. Brava!