Jim P. here filling in for Laura who nerded out this weekend at the ACPT.

My track record at metas has been spotty at best, and this weekend I’m tasked with reviewing two of them: this one and the Fireball. Wish me luck.

Thankfully for me, I was able to work my way through this one, despite a number of red herrings. I wonder if my solving path is typical of others’. Let’s have a look. 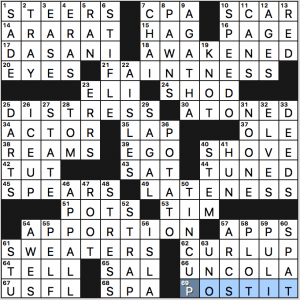 With no obvious theme answers, let’s focus on the longest entries: AWAKENED, FAINTNESS, DISTRESS, LATENESS, APPORTION, SWEATERS. We’re told we’re looking for an 8-letter word, so if each of those words led to a letter, that’s only six. We need two more. The next likely candidates are ATONED and SPEARS just because of their placement in the grid, but there are a number of other 6-letter words. Hmm.

The next thing I noticed was how bland some of these long entries were: FAINTNESS, DISTRESS, LATENESS, APPORTION, etc. No pizzazz there; how could that be related to the theme? It made me think anagrams were in order especially with three entries ending in -ESS.

Then I noticed the grid contained STRESS at 48d which is DISTRESS minus the DI. And look! STEERS at 1a can be made with SWEATERS minus a WA. Interesting…but this led nowhere, too.

Finally, I cottoned on to the fact that 69a POST-IT was clued [Sticky note] which echoed the puzzle’s title. Surely, this is the right track.

One definition of the word POST is “after,” so maybe we have to find instances of IT in the grid and look for the next letter. Great idea, but rats! There is no other IT in the Across direction or even in the Down direction. But if we widen out to look in all four, or heck, all eight directions (including diagonals) we find there’s an IT going up in STIFLE as well as in TIN CUP, one going down and to the right starting at square 26, and one going backward in APPORTION as well as in TIM. That’s five. Not enough, and anyway, what would you do with TIM and TIN CUP where the square after the IT is a block? Sigh.

Oh, hello! Look at row 11 which consists of POTS and TIM. The first six letters anagram to POST-IT with an M leftover. I wonder…

Nope. Another red herring. There are no other anagrammed instances like that in the grid.

So where are we? Lost. Okay. Well, I tried look for ITs in the grid. What if I looked for them in the clues.

Continuing with the Acrosses we find witch, competitor, Whitney, Fitted, penitent, units, little, guitar, Britney, Cratchits, knitwear, literary, and citrus. Those give us CONTEST ANSWER. Aha! Cue the air guitar! We are on our way!

Doing the same with the Downs and putting it all together we get the sentence, “THE CONTEST ANSWER IS MOLASSES. “Molasses” is 8-letters long and fits with the title and revealer clue. So there you have “it.” And there. And there as well. And…

I thought this was great fun. Probably because I was able to figure it out. If I hadn’t, I probably would have thought this was no fun. But it still leaves me wondering why there are so many bland answers in the grid. With no actual theme answers, couldn’t it have been a bit more lively? Or was it done by design to lead us away from looking at those long entries. Perhaps we’ll never know.

My first instinct is to ask how hard can it be to construct what is essentially a themeless grid and then massage the clues to get the message you need. As a constructor you would have quite a lot of freedom that you don’t normally have in a themed grid. But I expect there’s some nuance that I’m not grasping.

But all in all, I thought this was a fun mechanism for finding the answer which was clear and unambiguous and provided that dopamine rush we all crave. Four stars from me.