Hoo boy! Where to start on this one? 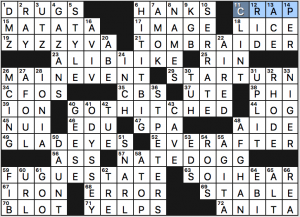 I guess with the fact that it kicked my ASS (56a, [Kissing or kicking target]), especially that NW corner with the likes of ALIBI IKE (never heard the term), ZYZZYVA (ditto), and GAZANS (clued very trickily). 53d EDS also got me [Time management, for short]; I still don’t know what that means. I suppose I should have seen NATE DOGG, but (1) I’m admittedly not up on my rappers and (2) I wasn’t sure about 55d AGITA, so I had NATE_O_G which I could make no sense of.

Elsewhere we have TUH clued ambiguously as [“Ah done been ___ de horizon and back …”: Zora Neale Hurston]. Unless you know the quote, this could’ve been filled in with a number of different letters. Thankfully, the crossings were gettable, even UTE (37a, [Sport ride]).

But we came here for the meta, didn’t we, and even though some of the fill and cluing was bonkers, the meta seems to be pretty straightforward. We’re tasked to answer the question “What two grid entries in this puzzle can combine to form an eighth theme answer?”

The seven main theme answers are clear; they are these two-word phrases:

It’s pretty obvious what’s going on here; the base phrase for each entry has a letter that defected from its word and went over to the other word. And guess what. Those letters, in order, spell BE THERE which should cause you to recall the phrase, “Be there or be square,” which in turn, echoes the puzzle title, “Not Square.”

And as savvy puzzle solvers, we are not square, but indeed we are there! So let’s put our gray cells to work to find the eighth pair of words.

There are a lot of possibilities, but let’s focus on words that can become another word when either the first or last letter is taken away.

One of the first ones I saw was DAUNT becoming AUNT. And look, right next door is GOO which could become GOOD if it gained the D. But GOOD AUNT is not an in-the-language phrase that I know. (But there are a heckuva lot of TV shows that start with “Good”. Maybe GOOD AUNT is one of them?)

What else is there? CLINT becomes LINT minus the C. DRUGS becomes RUGS minus the D. IMAGE becomes MAGE minus the I. And STABLE becomes TABLE minus the S, etc. Hmm. That one seems promising.

You know what else is odd? CRAP (11a, [Stuff that stinks]). I don’t think I’ve ever seen that in a grid. And guess what again. Put CRAP with STABLE and you get the base phrase CRAPS TABLE, which is a real thing, and what do you know, it’s not a square table. 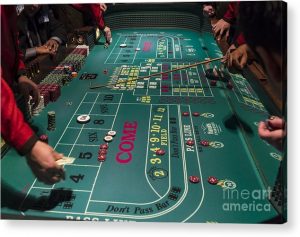 So I’m thinking that’s the meta answer. I can’t be sure because I stopped looking after that, and it’s a very real possibility that I missed something.

One thing that bugs me about this being an “eighth theme answer” is that the defecting S doesn’t go along with the phrase BE THERE. That is, BE THERES is not a real phrase. But I suspect I’m overthinking it, and I should be satisfied with my result.

I also wish there was a stronger link between the grid and the answer CRAPS TABLE. There are many tables that aren’t square (dinner table, periodic table, coffee table, round table, etc.), so I found myself wishing for a stronger aha moment. Maybe if DICE and ROLL were in the grid somewhere symmetrically? 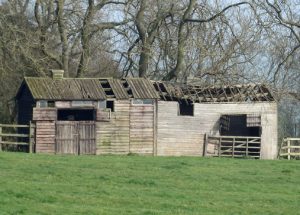 But I’m thinking you don’t put CRAP (clued scatalogically) in your grid unless you really have to or if it’s part of a theme. And it could easily be changed to CLAP without any significant impact on the grid (RID becomes LID). So I’m sticking with CRAPS TABLE as my answer.

The final question I put to you is, how would you clue CRAP STABLE? Maybe [Shoddy farmyard structure]? Surely you can come up with something better. Let us know in the comments.

How to rate this. The grid was difficult for me, but I have to admire it. And I’m thankful the meta wasn’t as hard, but it still gave a good workout. 4.25 stars.