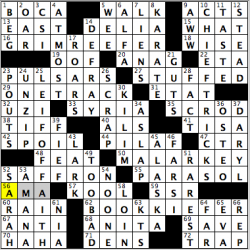 Good morning, everybody! Here is hoping you are all doing well. Let me be the last person on here to mention the wonderful time that was had at the American Crossword Puzzle Tournament that took place over the weekend in Stamford, Conn. Honestly, my work schedule during the time of ACPT — specifically, covering March Madness (NCAA Men’s/Women’s Basketball Tournament) on location at one of the host cities — should have precluded me from going to Stamford in five of the last six years at least.

This past weekend marked my eighth consecutive year of being in Stamford for the event. That’s how magical ACPT is, with the biggest allure being the wonderful, like-minded, truly caring people you get to meet, whether you’re catching up with someone you know or meeting someone for the first time who will sure become a lifelong friend to you! Also, if you’re a hugger, this place is one of the best to give/receive them, a sign of how genuine almost everyone is to see you and to welcome you to a community with love and black-and-white squares as the foundation. It’s obvious that coming to the NYC area, depending on where you are as you read this, is expensive and can make it hard to ever be a part of this event, regardless of other factors in one’s life. But if you have not attended an ACPT before, try your best in making it out here if you are willing and able to one of these years. Over 200 rookies did so this year, with the only downside to that being that my middle-of-the-pack “E” division solving speed only looks worse in the final standings! The hugs, amazing puzzles and even more amazing people surely make up for that!

Oh, we have a puzzle to talk about today! Today’s offering from Liz takes common words/phrases and changes the “p”-sounding syllable in it into an “f”-sounding syllable, thereby creating some pun-filled goodness in the grid.

Definitely liked the Middle Eastern flavor in the middle of the grid, with KILIM (30D: [Middle Eastern rug]) and FARSI (46D: [Language of Iran]). I’ve never personally made a dish with SAFFRON before, but the times that I’ve had saffron rice has been beyond delectable and is making me curious to buy it and use it in a home-cooked meal in the future (52A: [Paella spice]). Loved the fill of MALARKEY, especially since I use that word in regular conversation more than probably all other 30-somethings in the state of New York combined (50A: [Balderdash]). Liked the intersection of TASTE (11D: [Take a nibble of]) and STUFFED in the grid (27A: [Unable to eat another bite]). Along with the grid being tasty, it also has a bit of feistiness, with both TIFF (38A: [Squabble]) and SCRAP, at least if you think of the alternate definition of the latter (26D: [Metal to be recycled]).

“Sports will make you smarter” moment of the day: HAHA (70A: [“Funny!”]) – Current National Football League football player Ha Ha Clinton-Dix is a safety who recently signed a one-year deal with the Chicago Bears this offseason. During his time at the University of Alabama, Clinton-Dix, whose given first name is Ha’Sean, won two national championships (2011, 2012) while being named a consensus All-America in 2013. Ha Ha was drafted by the Green Bay Packers in the first round of the 2014 NFL Draft and, in 2016, made the Pro Bowl while being named a Second Team All-Pro selection at safety. 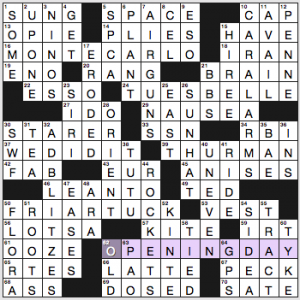 I don’t know how it’s possible, but baseball’s OPENING DAY is this Thursday. I really thought it was always in April. The revealer clue is 62a. Start of the baseball season … or what the start of each starred clue is?], and those seven answers start with three-letter abbrevs for the days of the week. We’ve got SUNG, MONTE CARLO, TU ES BELLE (a contrived French phrasal answer?), WE DID IT, THURMAN, FRIAR TUCK, and SATE. Presumably it’s running Tuesday rather than Thursday because it’s an easy puzzle.

When you squeeze eight theme entries into a 15x grid, things get a little tight in terms of fill. Wasn’t loving ENO ESSO EUR IRT ARA SPCA, but those noisy CAR ALARMS were nice. (This morning’s home-office soundtrack Chez Fiend included jackhammering from one of this type of machine—and it’s actually preferable to godforsaken car alarms that go off for no reason.)

Can ANISES really be plural? I hate it plenty in the singular. (As an herb and flavor, not as crossword fill.) Please don’t bring me multiple ANISES.

Signing off early—3.25 stars from me. Good night! 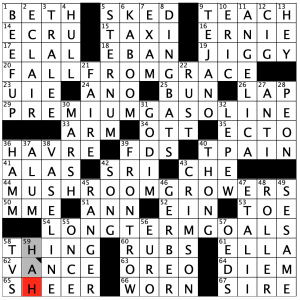 After a relaxing weekend of solving in ideal quiet circumstances, this puzzle was solved with a six-year-old making constant noise and several other distractions. That’s my story and I am sticking to it!

Nothing too complicated with today’s theme; sort of a tribute to a British car:

When I think of MG, I think of the car, but I’ll bet it was fun to brainstorm potential grid entries for this. Matt, missed you this weekend at the ACPT! You would have loved these puzzles!! 4.5 stars today. 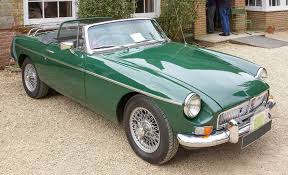 That is all! Another Jonesin’ coming next week. 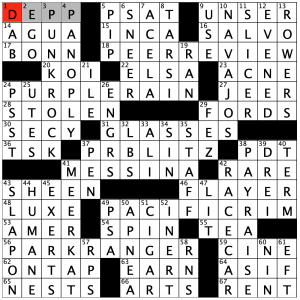 Tons of themers! There are actually SIX of them in this puzzle. I almost didn’t catch the starred clues in the down entries! Ther is a revealer smack-dab in the middle of the grid to explain the relatively simple idea:

Great job on interlocking all of this in a 15×15 grid. I still don’t know who this constructor is, but I would like to meet whoever can make puzzles this good. 4.7 stars from me today.

For my ACPT recap, I finished 74th or so with one error, on the last puzzle! Eliminate the error and I land in 55th with a trophy for 2nd Midwest, which I thought I could attain. Motivation for next year!

After getting to meet many of my crossword heroes this weekend at the American Crossword Puzzle Tournament, I’m excited to see which “Heroes” the Tuesday WSJ has in store for us! 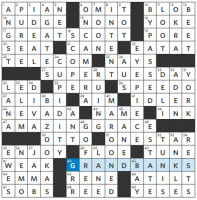 17A: GREAT SCOTT [Florida senator Rick’s alter ego] – Not the greatest dude, so I was a bit bummed to see him in the grid.
27A: SUPER TUESDAY [Actress Weld’s alter ego] – A bit of a dated reference, but I like how modern/fresh the themer itself feels.
47A: AMAZING GRACE [Singer Slick’s alter ego]
62A: GRAND BANKS [Model Tyra’s alter ego] – of Newfoundland, I think!

Is this a debut puzzle? I don’t see the constructor’s name in the Fiend database anywhere so, if so, brava! What a great debut puzzle and a fun, straight-forward, consistent theme for a Tuesday. I appreciated not only getting to solve a puzzle from a woman constructor, but I enjoyed that 3 of the 4 theme entries were also women. And each woman is from a different era and profession – that will certainly allow most any solver to get some kind of foothold into the puzzle with one theme entry and maybe learn more (like I did!) about another one.

I really enjoyed clues like [Sparks setting] for NEVADA (in reference to the town, not the Los Angeles Sparks WNBA team) and [Root for the chef] for BEET. I also learned in this puzzle that CUPIDITY means [Greed], which I’ve never really associated with Cupid; it turns out that the word might actually derive from covet instead, which would make more sense. Neat! Finally, can we talk about how clean the fill is in this puzzle?? When AUS and ELEM are the worst offenders I can find, it’s a pretty clean fill IMO. Nice! 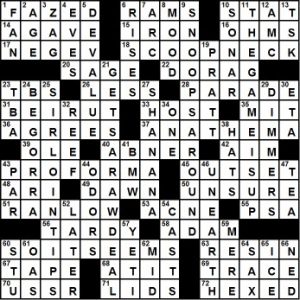 Judge Vic here, subbing in for Jim Q. “Playback,” huh? Let’s see if I can get that from the theme answers and reveal:

Other fill that might be deemed noteworthy include SCOOP NECK, ANATHEMA, PRO FORMA, SO IT SEEMS, SHA NA NA. One item I did not like was BEGORRA–I’ve never known it, save for in crosswords.