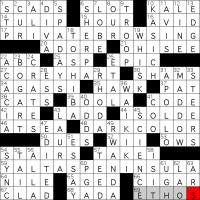 hello and welcome to episode #564 of matt gaffney’s weekly crossword contest, “Early Learning”. this week, matt challenges us to name a two-word phrase. fine. what are the theme answers? i don’t know, but there are four long(ish) answers, all reading across:

what’s the theme, though? these answers don’t appear to have anything in common. matt claims that this is (yet again) an attempt at a week 2 difficulty, but boy, i have not had the slightest idea where to go with this one. lots of things look like they might be a little relevant, but all of them have very quickly turned into dead ends, or only apply to one of the four theme answers. for example, YALTA’S PENINSULA contains both ALTA and ASPEN (overlapping at that second A), two skiing meccas. PRIVATE BROWSING has BETA hidden backwards, and DARK COLOR has LOCK backwards. but COREY HART doesn’t really have anything.

the theme, if there is one connecting those four entries, ought to be related to the letters rather than the semantic meaning of those words, since YALTA’S PENINSULA is patently made up (and if there is a semantic connection, it’s to CRIMEA, which is explicitly given to us in the clue).

after talking it over with my equally stumped solving buddy andy kravis, the one tenuous connection we were able to find to all four theme answers is the color black. it’s obviously a (the) DARK COLOR; crimea is a peninsula in the black sea; corey hart’s “sunglasses at night” connotes darkness/blackness (and if surrender is a white flag, then perhaps “never surrender” as the opposite of that might be said to be black in a way); and, um, there’s also PRIVATE BROWSING, which is the most tenuous of tenuous connections. but incognito mode in chrome has a spy in dark glasses and hat as its icon.

how are we supposed to arrive at a two-word phrase, anyway, from these four theme answers? that at least suggests we’re not doing something like extracting one letter per answer. and what does the title have to do with anything? “early learning” is related to things like pre-K and head start, or maybe even the ABCs (and ABC is itself an entry in the grid, clued as {“The Bachelor” network} at 22a). both “early” and “learning” contain EAR, but that doesn’t seem to matter either.

or does it? PRIVATE can be followed by “eye”, and if you stick “eye” in the middle there you can get EYEBROWS. that … also goes nowhere, alas, even though HART is a homophone of a body part. certainly YALTA’S can’t be followed by anything, and let’s just all pretend we don’t see the body part that’s almost hidden in PENINSULA.

another early education staple is the “three R’s”, but that doesn’t appear to be relevant either. PRIVATE BROWSING, COREY HART, and DARK COLOR all have two R’s, but YALTA’S PENINSULA has zero.

one thing andy noticed was that the clue for john KASICH, {Republican who won one state in the 2016 primaries}, notably omits the state ohio; and KASICH crosses {“Understood”} OH I SEE at the I. so it’s almost like the second O of OHIO has changed to a SEE (homophone of “C”). but this doesn’t really relate to any of the four long answers. maybe the central across entry {Half of a college football song title} BOOLA is also thematic, and the omitted YALE is close to YALTA’S in a similar way as OHIO to OH I SEE? but that’s also kind of weak.

i’m giving up, i guess. as a hail mary, i’ll try HEAD START, since it is a two-word phrase associated with early learning that might also lend itself to interesting wordplay of the sort that almost relates to several things in this puzzle. let me know in the comments what i missed.