Theme: Common phrases re-imagined as if the speaker had a stuffy nose. 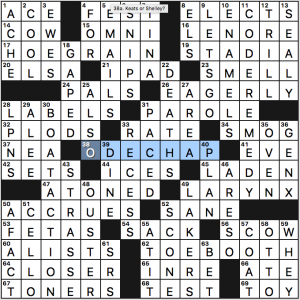 Hmm. These don’t really work for me. If I plug up my nose and try to say “whole grain,” there’s still an L in there, but the N becomes a D. Same story with “bolt-action.”  “Toll booth” pretty much sounds as originally intended, and in “cold remedy,” the M becomes a B. Of these five, only “old chap” -> ODE CHAP sorta makes sense to me. Your mileage may vary, I suppose.

The rest of the grid is solid with the likes of “LET’S GO!”, STRASSE, LARYNX, LAKERS, and OUSTER. Weird plurals STADIA and TONERS are eyebrow-raisers, though.

The grid is fine. Nice, even. But the theme missed the mark for me. Three stars. 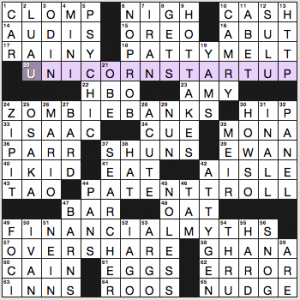 The theme revealer is 49a. [Misconceptions about money … or a loose hint to 20-, 24- and 44-Across?], FINANCIAL MYTHS, which I guess is legit but the phrase isn’t too familiar to me. The theme answers are phrases from the financial world that include names of mythical beasts—but these also are not things I really am aware of. Just me?

Your mileage may certainly vary, but the theme felt rather too arcane to me. I do appreciate that the theme isn’t overly dense, which means the fill is solid.

Fave fill: OVERSHARE. Love the apt clue, [Discuss one’s toilet habits, for example]! Also fond of HOT TAKES. (My hot take: The PATTY MELT is an abomination. The name alone! Ach. I’ve never had one, and the clue specifies Swiss cheese but I feel like I’ve seen it photographed on menus more with American cheese.) 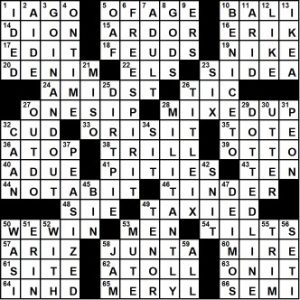 Hmm. The letter I runs from each of the top corners to each of the bottom corners. That’s 29 I’s in the shape of an X. The puzzle’s reveal, 26d, goes, [Gender equality law represented by this puzzle’s diagonals] TITLE IX.

Again, hmm. Why do these diagonals necessarily represent the Roman Numeral IX associated with Title IX of the Educational Amendments Act of 1972, which famously states, “No person in the United States shall, on the basis of sex, be excluded from participation in, be denied the benefits of, or be subjected to discrimination under any education program or activity receiving Federal financial assistance”? One might expect an answer to this question to emerge from a couple or three theme answers. But one would be wrong, I think (enlighten me if I err). The rest of the puzzle feels like a not-awful themeless, though, highlighted by:

I don’t purport to know what might or could have gone into, say, 3d, 25d & 29d to constitute theme material consistent with, or in support of, the reveal. Just sayin’ that without that, the editorial question posed above looms. And, as impressive as the diagonals may be, they don’t answer it. They just make a Roman nine, kinda, sorta … with the I being much smaller than the X and having 28 mirror images of itself. 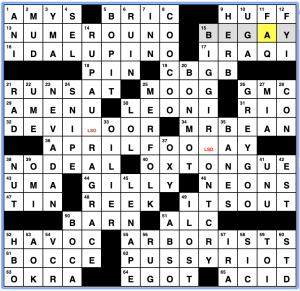 Max Carpenter microdosed us all with this week’s guest puzzle in the AVCX.  You’ll want to click through on the screenshot to catch what’s in the rebus squares, but if you know anything about microdosing, you’ll already have an idea of what’s going on:

There’s little doses of LSD everywhere in the puzzle.  I keep feeling like I missed one somewhere, but a second pass through the grid didn’t reveal any other squares that would benefit from a rebus entry. 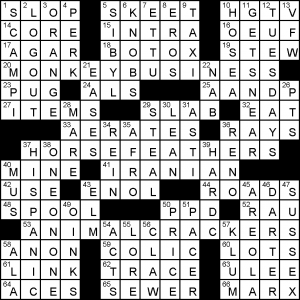 This felt like it should be a clichéd theme, once I found it, like THESUNALSORISES etc., but I don’t recall encountering it before. MONKEYBUSINESS, HORSEFEATHERS and then more general ANIMALCRACKERS… Along with having an zoological link, they are MARX brothers films.

There are only three theme entries (plus MARX), but they are of irregular length, which seems to be why there aren’t a lot of other flashy answers, and why things like PPD and AANDP (crossing PTS) occur.

We don’t have ANIMALCRACKERS here, but we do have ZOOBISCUITS, which are completely different, I gather.