I did this puzzle in AcrossLite, so I only saw circles. The PDF version has shaded squares as well. That makes the puzzle more esthetically pleasing but wouldn’t have affected my solve or my understanding and enjoyment of the theme.

Each theme answer has circled and shaded letters (circled letters in red, shaded in blue): 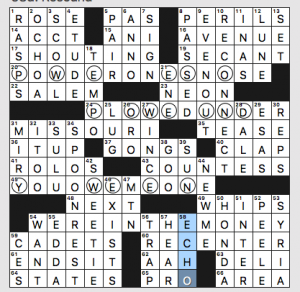 And a revealer to explain it all. 54a [What a lottery winner might exclaim, or a literal clue to this] is WE’RE IN THE MONEY. You can see WE inside PESO, POUND, and YEN. Nice, solid theme and a smooth puzzle. Two thumbs up from me.

What I didn’t know before I did this puzzle: that Josephine Baker was born in MISSOURI. 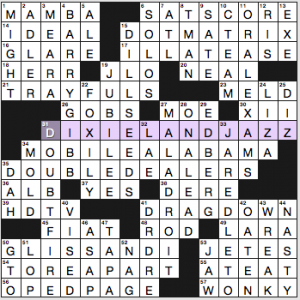 I was expecting stacked 15s, but instead we get a Ries-style staggered stack of 13s in the middle of this 68-worder.

Highlights: SAT SCORE; (raise your hand if you are ever) ILL AT EASE; DIXIELAND JAZZ and its neighboring MOBILE, ALABAMA; some shady DOUBLE DEALERS (these don’t pertain to the top two thirds of the stack, do they?); pretty GLISSANDI; useful WONKY; the only surviving brother, BARRY GIBB; Mrs. DOUBTFIRE; JUBILEE; MALADROIT; and JARED LETO.

Lowlights: That ALB/DAH crossing, and ALB being clued as if that’s the common abbreviation for Alberta (Alta.)—one wonders if Martin clued it as the crosswordese priestly garb, since he’s Canadian, eh. TRAYFULS/FOXILY also both felt awkward to me. And I need a ruling from Zulema as to whether singular TAPA is legit. OATEN, meh. 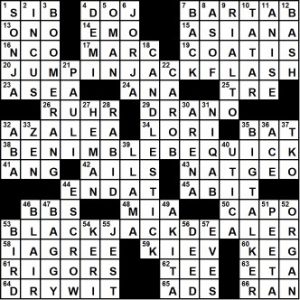 What Ed has done, at the cost of Utah blobs high and low, is … well, you tell me. Here are the relevant highlights:

That said, the Stones’s Jumpin’ Jack Flash is, I read somewhere, based on an actual person, Keith Richards’s gardener) The jack in Blackjack dealer, OTOH, is not itself a jack as such. It’s intangible, being the second part of a word that can mean a card game or a hand weapon. I can’t help but wonder why JACK-IN-THE-PULPIT was not the choice here. In the name of this flower, the  jack is “the light-green spadix which sits in a darker green spathe.”

Elsewhere, (7a) A grasshopper may go on [a] BAR TAB. I AGREE that’s a nice clue, an effort at DRY WIT, perhaps. Did it BOOMERANG? Not to worry. I’m no BIG TALKER.

Rob Gonsalves and Jennifer Lim’s The Chronicle of Higher Education crossword, “Call It in the Air”–Judge Vic’s write-up. 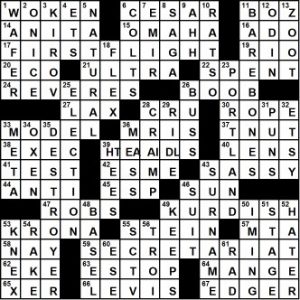 Rob and Jen are new to the biz, having debuted with a Puzzle Society crossword back in December. With this puzzle, they soar to new heights with a heads/tails Schrödinger of all things.

Of course, we need to acknowledge the crossers here:

Outstanding! The real beauty of this theme, though, is in the creative entries employed to flesh it out:

Good fill! Nice clues!
To boot, we find elsewhere BARE BONES; ZOOT and SUIT, clued with cross-references; and DESTROYER … and that’s more than enough, with this nice gimmick! 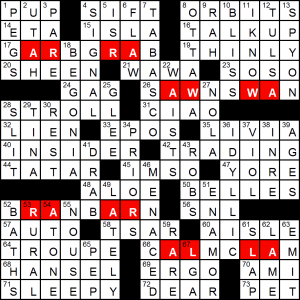 The central piece of wordplay here is particularly deft. INSIDERTRADING is interpreted to mean wacky answers that are made of two four-letter anagram pairs whose middle letters swap: G(AR)BG(RA)B is the most clunky of the set. S(AW)NS(WA)N, B(RA)NB(AR)N and C(AL)M(LA)M are less tortured.

Between a theme that actually gives you a lot of letters for free once you understand it, a well-connected grid, and very few difficult, misdirecting clues, this was a very easy Friday.

[Opposite of embiggen], PARE – we’re accepting this as a real word now…